Here’s a list 3 wrestling games for Android which you can use to have fun fighting in the ring against other wrestlers, on your Android phone of course. Wrestling has a lot of fans and some of those fans of wrestling are bound to be fans of Android. Apps from the list down below will help you combine your love of Android and wrestling into fun wrestling games. They’re fun even if you’re not a wrestler.

Let’s look at the apps we found. 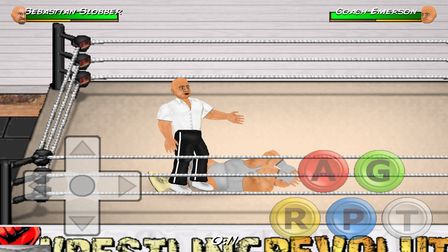 Wrestling Revolution is a wrestling game for Android that doesn’t have super advanced graphics. They are actually 2D, something very similar to how South Park looks like.

Controls can be on-screen or you can control everything using screen taps, pinches, swipes and partings (when you part your fingers on the screen). There’s a comprehensive guide showing you how controls work when you open up the training session. You can switch between controls by opening the settings. Game has a career mode through which you can progress or you can alternatively play one on one training sessions, like the one from the image above. 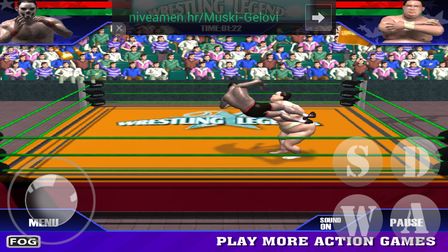 Wrestling Legends 3D has a bit of an improvement in terms of graphics over Wrestling Revolution.

The game also has on-screen controls with which you move your character (the movement stick on the left) and with which you throw punches (the 4 buttons on the right). App only has one on one fights, and despite its name, it doesn’t have any famous wrestlers, characters are generic, you won’t be familiar with any of them. App is a bit more crowded with ads than usual, which might put some people off, but it’s not too horrific that other apps aren’t guilty of.

Make sure to also have a look at 5 Free Android Fighting Games. 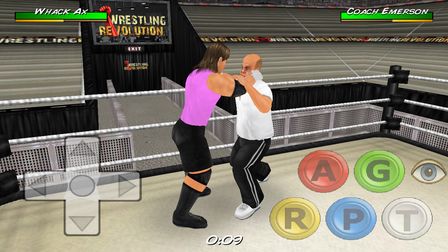 You can see how the graphics are improved on the image above. Note that due to the improvement in graphics, you will need a bit more advanced graphics hardware on your device to play this game. My phone actually got a bit hot after playing the game for a little while. When it comes to menu and controls, everything is the same as it is in the standard version of the app.

Make sure to also have a look at Download WWF Raw: Free PC Wrestling Game.

I like the two Wrestling Revolution wrestling games from the list above, Wrestling Revolution and it’s 3D counterpart. All the game controls are easy to understand and they are very responsive. You can pick between the less hardware demanding standard version and the more advanced 3D version if you want to enjoy in more realistic graphics. 2D version is still fun, and it might even be a better choice for you if you have an older device. Both versions require around 30-40MB of storage space, so you might not be able to install them if you’re short on space.