This tutorial explains how to bulk add people in Twitter list. There is a free command line tool that you can use to do it. The tool which can do this is known as Create Twitter Lists. This tool lets you add hundreds of people in a specific Twitter list quickly. It takes a list of Twitter users along with their handle from you and then adds them in your target Twitter list. It creates batches of 50 people from the list and then adds one batch at a time in the list in a single shot. And using this way, you can add a lot of Twitter users in your list right from your PC. The tool is cross platform and you can run it on Linux, MAC, and Windows without any fuss.

If you use Twitter lists very often, then you know this fact that you can have to add members in the list manually. And if you want to add a lot of people in a list, then it will be very time consuming. So, I have explained a very simple command line tool which takes that pain away. You just have to specify a list of Twitter users to add and it will do that for you. It just takes a few seconds to process the list and add members in it. 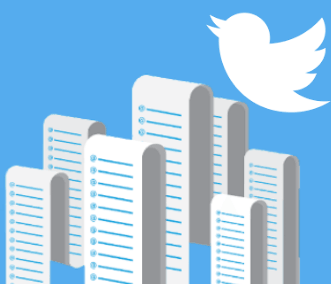 Create Twitter Lists is a free and open source tool that you can use to bulk add people in Twitter list. And you just have to run a simple command to do it. But do note that, Twitter API doesn’t allow itself to be bombarded by a lot of requests. So, in my opinion, do not add members more than 1000 using this tool.

Here are the steps to bulk add people in Twitter list. And before starting install Node.js on your PC.

Step 1: Gram the repository of Create Twitter Lists from here as a ZIP file. After that, extract it to some folder and then open a command Window there. Next, run this command.

Now, simply put the command window aside and move to the further steps.

Step 2: Now, in the files of the tool, you will see a “config.js” file. Simply open it and fill the Twitter app credentials there like Consumer Key, Consumer Secret, Access Token, Access Token Secret, etc. And if you don’t know how to get these, simply look over here.

Also, in the same file, specify your Twitter handle and the name of the target list in which you want to bulk add people. 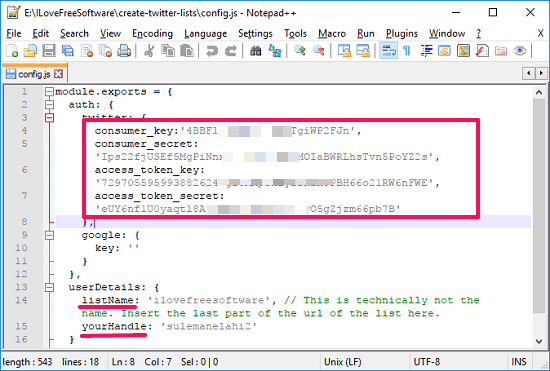 Step 3: Open the “members.CSV” file and in the first row, specify the Twitter handles of the people. 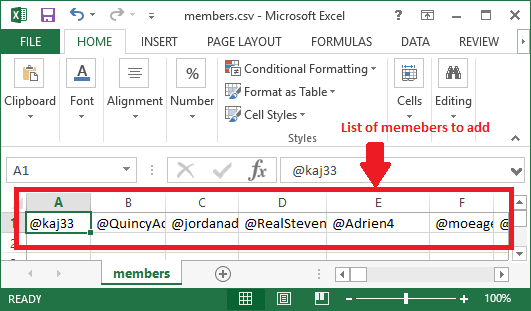 Step 4: Now, the tools is all ready to work. Get back to the command window and run the following command. You will notice that it will start adding people in the target lists in a batch of 50 people. And if there are some users in the list whose accounts are private or protected, then they won’t be added to the list. You can see the logs in the command window itself.

In this way, you can easily bulk add people in Twitter list. And the Create Twitter Lists tool makes it very simple to do that. You just run a simple command and add large number of people in your target Twitter list.

If you still add people in Twitter lists manually, then you need to change that. The above tool that I have mentioned will definitely save you a lot of time. You just have to run a simple command and add multiple people in a Twitter list of yours. And I think the above tool can be used by an average PC user.