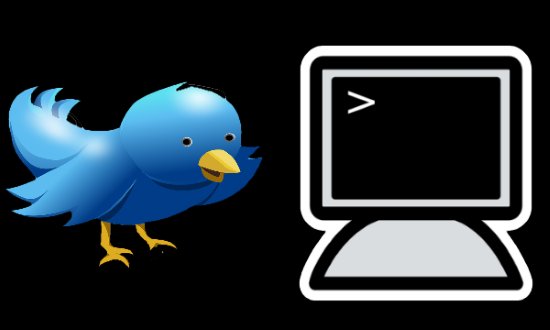 It uses pin authentication method to authorize your account and requires Python to be installed on your PC. After all setup, you just have to run simple commands to install it and use it.

Installing and using Python Twitter Tools is very simple. If you have Python installed, then open a command window and run the following command.

After running the above command, Python Twitter Tools will be installed on your PC. You can ensure the installation, by running “twitter –h” command. And I have already told you that it uses pin verification method. So when you run any command using it, then it will first authorize you. For that, it will open a web page in your browser and will ask you to allow this command line app. After you allow the app, it will show you a pin that you will have to enter in the command line window. After it has verified your account, you can start using it in its full glory.

Here is the list of tasks that you can do using this command line Twitter client for Windows.

Node-Tweet-CLI requires Node.js to be installed on your PC and it uses pin authentication method to authenticate a user. Just like above command line client, you will not have to download anything to install it. Just run the following command to install it on your PC. 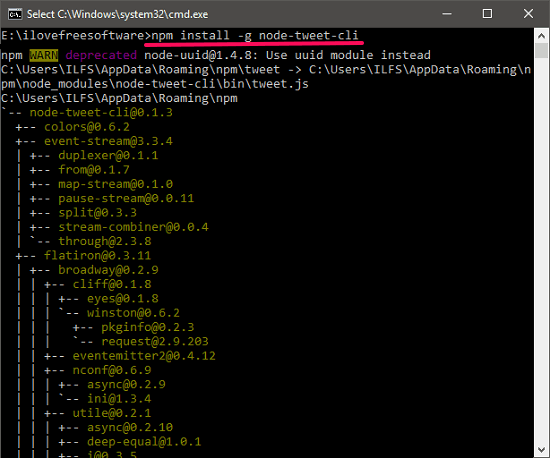 When you run this command, Node-Tweet-CLI will be installed on your PC. After that, when you run the login command (“tweet login”), then it will open the browser tab and will ask you to authorize the app to access Twitter. After you grant permission to it, a pin will appear that you have to enter in the command window to log in. And then you can start using it. 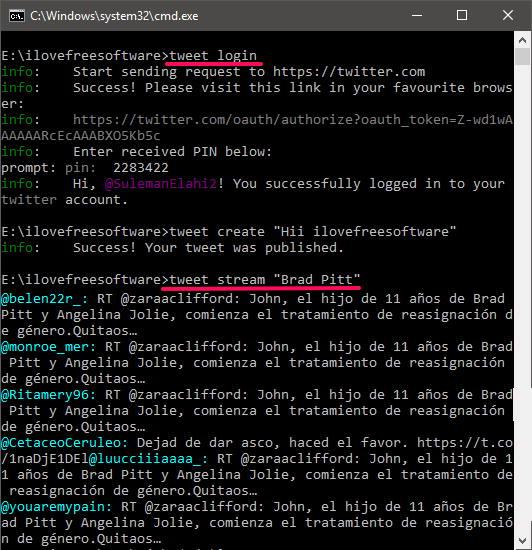 Node-Tweet-CLI works as it supposed to do, but offers less Twitter features. But, this command line tool is still in development, so may there will be more features in it in coming updates.

Recent-Tweet-Fetcher is actually not a fully functional Twitter client for Windows, but can be used in situations where you want to only see the desired number of recent tweets from a specific user’s account. This tool will take the Twitter username and number of tweets to fetch as input parameters. After that, it will show you the exact number of tweets on the command window.

Firstly, download the repository of Recent-Tweet-Fetcher from the GitHub’s page and then extract to some directory. After that open command prompt in the same window using Shift+right-click option. After that, run the command in the following syntax. 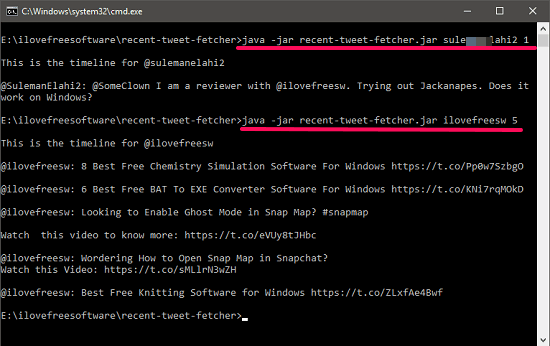 After running the above command, it will show you the tweets from the target user’s account in the command window. You can see the above screenshot.