Here is a simple method to send same DM to multiple Twitter users at once. In fact, the method mentioned in this tutorial will make it a lot easier to do. In order to get this job done, I will use a Google Sheets add-on named Twitter Merge. The only major task is to specify a list of users to whom you want to send the same DM. After that, you can specify a message to be sent and then use this Google Sheets add-on to broadcast the DM to specified users. The best part of this method is that it can also be used to send personalized DMs to Twitter users. However, the only limitation is that it can’t be used to send messages to Twitter users who are not following you. But if you want to send same Direct Message to all your Twitter followers together, then this method is perfect.

How to send same DM to multiple Twitter users at once:

Let’s now see the steps to send same message to multiple Twitter users at once:

Step 1: Get a copy of Twitter Merge Google Sheet from the link at the end of this review. After that, specify Twitter handle usernames (no @) in its “Twitter User” column, as shown in the screenshot below. If you want to send same DM to all Twitter followers, then you can create list of your Twitter followers, and then add those handles in this Google sheet. 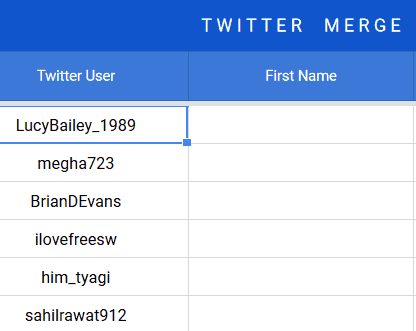 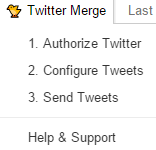 Step 3: Now, you can specify the common Direct Message to be sent to all Twitter users specified in Step 1. To do this, click on the Twitter Merge menu and choose “Configure Tweets” option. Now, you will see a dialog box in which you have to enter the message and choose it to send it as a DM to specified users. You can also choose to send specific message as tweets to the added users. Finally, click on the “Save Configuration” button to save the common DM. 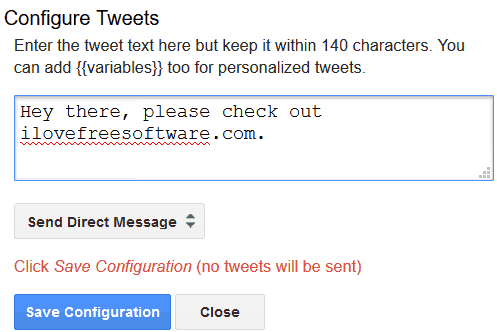 Step 4: To send the same DM to these multiple Twitter users, click on Twitter Merge menu and select the last option i.e. “Send Tweets”. As soon as you will hit this option, a confirmation box will pop up, allow it to send the messages. Twitter Merge then starts sending the common Twitter DM to all users one by one. You can also the message sent status in the “Status” column of the Google Sheets.

After sending the common message to multiple Twitter, I even checked out my Twitter Direct Messages to see if the DM was actually delivered to them or not. I was quite happy to see it passed the test with flying colors and the message was sent to all Twitter handles at once. 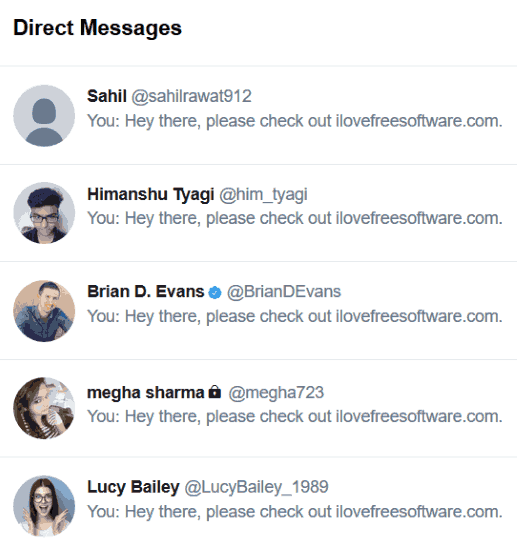 If you have a message that you want to convey to multiple Twitter at once then this tutorial will surely help you with that. Check it out and tell me how useful it was by posting comments below.