Flappy Smash is a free iPhone game in which you have to smash the Flappy Bird using the pipes. Everybody who played Flappy Bird knows how difficult that bird made our lives. As if we did not have enough problems, that we were given a bird who refused to fly and made our lives more difficult. Trying to make that bird fly was so frustrating for gamers all over. So, its time for revenge now, thank God somebody thought of this. This Flappy Bird game, lets you smash the maximum number of Flappy Birds using the pipes. If you will read the full name of the game then it is Flappy Smash – The End of A Tiny Bird, so its up to you whether you can end the story of the tiny bird or not.

In case, you are lover of Flappy Bird who doesn’t want to kill her then you will like these 5 Free Flappy Bird Alternatives for iPhone, Android, and Windows 8 reviewed by us. 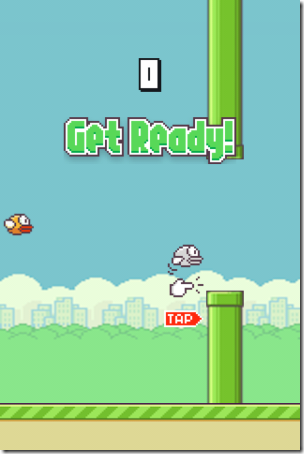 Flappy Smash is a completely free to play iPhone game which you can get either searching on iTunes App Store or by clicking on the link provided at end of this review. The interface and game play of Flappy Smash is similar to that of popular game Flappy Bird. The only difference is that in this game you have to kill Flappy Bird by smashing instead of saving her. While playing the game, you will see that the Flappy Birds will come from left side that too in groups. To smash them between the pipes, you have to tap the screen at the perfect time such that when birds will cross the pipes, they get smashed. You have only one life in the game and you can’t afford to skip even a single bird if you want to keep playing the game. 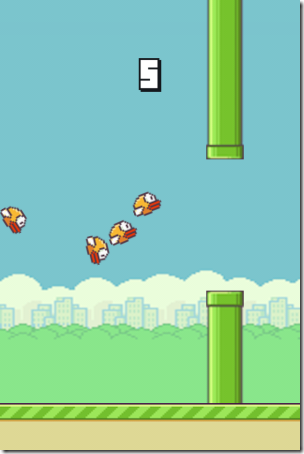 The game is very much easy to play when compared with the original Flappy Bird hence its very easy to get high scores. The game becomes a little difficult only if the group of birds becomes large because in that scenario, the chances of birds getting away without being smashed increases to a higher extent. The game has good sound effects of birds screaming when they gets smashed under the pipes. On the other hand, if you tap on the screen with no birds around then you can also hear the thud sound of both the pipes clashing with each other.

Besides this, you can also share your score on Facebook, Twitter, and mail. The game also lets you copy the score to clipboard for pasting it on any other field. 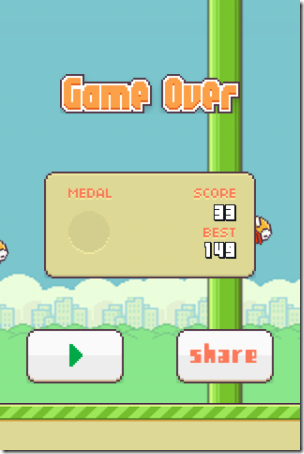 In case you are a fan of shooting games, then you can try your hand on this free iPhone game to shoot Flappy Birds to take revenge.

Flappy Smash can be a good game for those who really hate Flappy Bird and want to kill her. If I have to compare it with real Flappy Bird, then this game stands no where around it both in terms of difficulty as well as addiction level. But still, this game can prove to be a good entertainer when you are getting bored or when suddenly, you think about killing that frustrating Flappy Bird.