Flappy hunt for iPhone yet again proves that developers are just not ready to get over the removal of Flappy Bird from the app store. This game is not an alternative of Flappy Bird but it takes the basic design from that game and tries to give a new type of shooting game. You have to kill the flying birds in this game before they cross the screen. The person with maximum shoots wins.

You are provided with a target spot and you have to simply tap the bird you want to kill which will take that target to that bird and kill it. The ammo provided to you has no limits and also there is no Reload feature available. 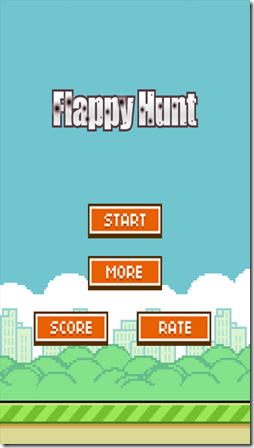 The birds which are to be killed in Flappy Hunt are exactly the ones which were featured in Flappy bird. They fly in a swirly up and down motion and come in groups so as to make the game a bit more challenging. The top counter is the number of kills which is your score and the counter in the top right corner is the number of birds which can be allowed to escape the screen. That counter is pre set to 2 i.e. you can only let two birds to leave the screen without killing them and it decreases as the birds pass by alive. 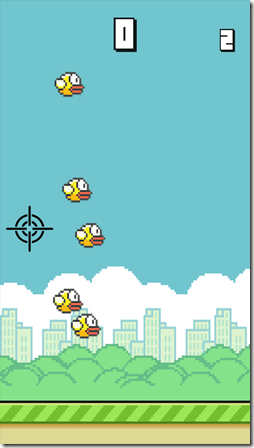 The game has no musical effects (FX) and concentrates solely on the sound effects which are also very limited. One sound is of birds chirping as they fly and get killed and the second sound of the gun. There is no way to pause the game or leave it once you have started. Loosing is the only option in case you want to leave. Since all you have to do is shoot the birds coming in your way at random, scoring is not hard at all in this game unlike Flappy Bird. There are sharing options just in case you want to brag about your score on Facebook. The game is also integrated with Leaderboard.

When talked about something related to Flappy Bird, the conversation is incomplete if we do not talk about the addictive capabilities of the game. Same rule is followed here too. This game is way too easy to be addictive. Moreover there is nothing much you can do except shooting the birds. The game is sort of buggy as well as I was unable to shoot some birds even on repeated attempts.

Nevertheless, this game can be downloaded from here.