Stringnote MyIdeas in Evernote is a free Android app that allows you to configure your Android device’s power button to take photos, record videos or audio and then automatically upload the same to your Evernote account. The app works by allowing you to configure a specific action for double tapping your Android device’s power button, and it’s extremely easy to use. You do need to have an Evernote account before you use the app, because this app only communicates with Evernote. Upon launching the app, you will be asked to authorize the app to post to your Evernote account. Once that’s done, you can begin to configure the app.

Stringnote is available for free from the Google Play Store. 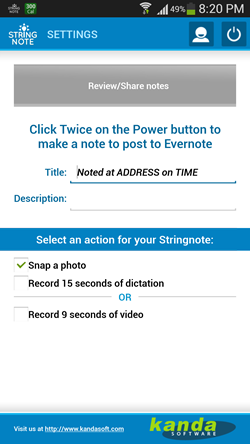 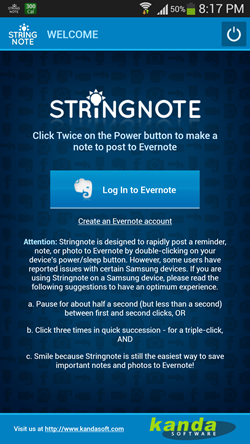 Once you log in to Evernote using the app and authorize it, you will be taken to the next screen where you can set up the app.

The app utilizes the power button on your device. Double tapping your power button will perform any of the actions that you have ticked above. Let’s say that you have ticked Snap a Photo, your Android device will launch you camera and take a photo and so on for the other options. Do note that the app needs to stay running in the background, and uses a considerable amount of system memory on your Android device. So if your device has RAM of 512 MB or lower, you may want to give this app a pass.

To stop the app from running, you can click on the Power button at the top-right corner of the screen, and that will kill the app after showing you a confirmation message (which you have to approve). Now it’s time to put the app to the test!

I came out of the app after selecting the Snap a photo option. Now, when I double clicked on my power button (which is how the app works), I was surprised to see a picture taken almost instantaneously, and then a message in my notification bar that the note has been uploaded to Evernote! I tried it out with different settings of recording audio and video as well, and as advertised, the app did that flawlessly as well. These were visible inside the app’s gallery which you can access by clicking on the Review/share Notes button at the top of the app. 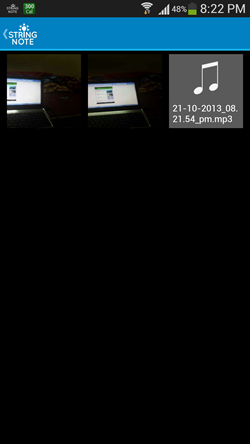 So in the app’s gallery, I could see my photos and my audio and video recording. But I was skeptical about the notes being uploaded to Evernote, and so I logged in to the Evernote app on my Android device, and sure enough, the notes were all there! 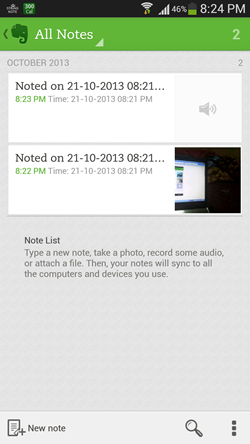 So above you can see the notes in my Evernote app. Which only means one thing- the app works flawlessly!

Results of some extra testing:

I switched off my device’s screen (sending it to a locked state), and then double tapped the power button. I was surprised to see that the app also works when the screen is switched off and your Android device is in locked state. But this was the case of an unsecured lock screen. As soon as I set a password or a pattern security, the app did not work while the phone was in locked state, which is completely understandable.

My take on this app? The app works incredibly smoothly, and worked flawlessly and as advertised on my device. It was free from ads, uploading to Evernote was quick and almost immediate, the video and audio recording quality was decent and the captured images looked great! My only complaint with the app is that it does not allow the users to tweak the recording settings for audio and video, neither does it allow you to set a custom quality (in megapixels) for your image. Those options might be added later. But apart from this, a major concern was that the app was using nearly 200 Mb of RAM on my device, which although doesn’t matter to me because my device has a 2GB RAM, but it might strike a severe blow on devices whose RAM is 512 MB or lesser, and may cause them to lag.

So what I like about the app? Everything except the RAM usage and the lack of tweakable settings. I hope that the developer fixes these issues in future, as the app looks very promising to say the least!

Get Stringnote MyIdeas in Evernote for Android.