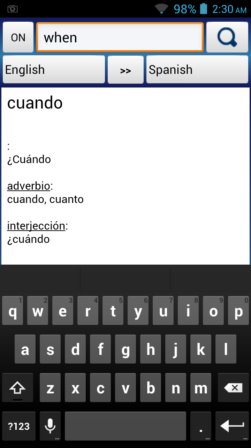 It supports over 50 different languages. Not all languages can be setup as translation pairs though, translation is available only for some of them. This is an app, so instead of having to browse through pages to find a certain word, you get to use the search tool at the top. Use the two drop down menus underneath the search field to adjust the languages. For most of the languages in the dictionary you’ll need to have an active internet connection, because this app fetches words from online dictionaries like Google Dictionary, Wikitionary and more. Pro version of this app has offline dictionaries, which makes it possible to use the app even when there’s no active internet connection around. 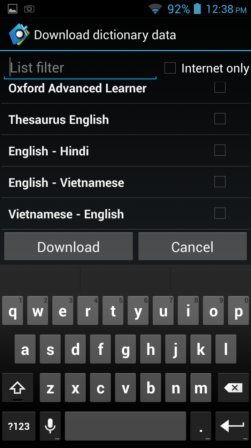 Multi Language Dictionary is in fact an offline multilingual dictionary Android app that supports up to 36 different language pairs.

You don’t need to have the entire 36 language database installed at all times, only those languages that you do need can be downloaded from the web. Dictionaries are very small. English – Hindu dictionary is just 1MB, so even if you download lots of them it shouldn’t take up lots of space. You find words using a search tool, just like with Multi Lang Dictionary, only with Multi Language you get to use your dictionaries offline. 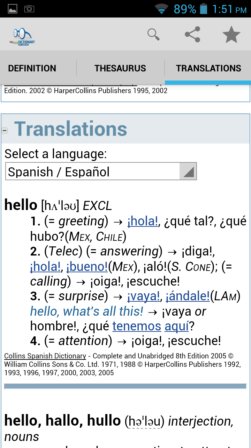 Dictionary by Farlex isn’t just a dictionary app. It’s also a thesaurus, translator and it offers additional definitions of words from languages all over the world. Up to 50 world languages are supported but there is a catch.

You will need to have an active internet connection in order to use this multilingual dictionary Android app. Interface itself comes in 13 different languages. Audio pronunciations are also available. App itself is very small so it should not take up a lot of space.

Get Dictionary by Farlex. 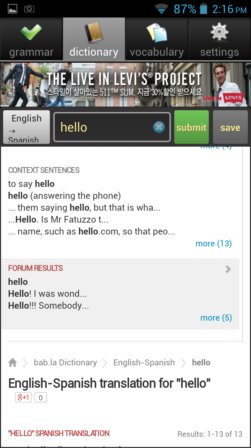 Dictionary All is another online dictionary app that supports multiple languages. Dozens of languages are supported, but you will need to have an active internet connection to access the online resources.

Vocabulary defined by users is also available. Dictionary All focuses more on Asian languages, like Japanese, Chinese, Korean, Thai, so have a look at this app if you need these languages.

Don’t forget to also have a look at 5 Free Windows 8 Apps To Learn Foreign Languages. 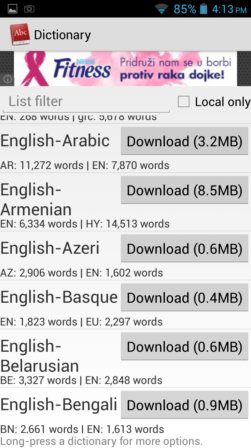 Dictionary Offline is in my opinion the best multilingual dictionary Android app and best of all it’s offline, like the name of it suggests.

Several dozen of languages are supported. They initially have to be downloaded and as you can see from the image above dictionary of a certain languages isn’t that big, just a couple of MB.

I like Dictionary Offline, and Multi Language Dictionary, because they are both offline dictionary app and they are of course multilingual. Other’s aren’t as bad if interent access isn’t an issue for you.