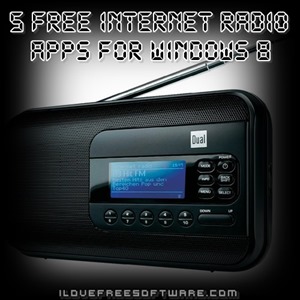 Online Radio Free gives you access to a wide range of internet radio channels sorted according to type of content. All the channels that play music will appear under the Music category, channels which air news will appear under the news category, and so on. The app allows you to favourite some channels as well, which then appear under the Favorites tab for quick access. The app also contains channels of various other languages like Polish, Russian etc. which can be selected from the “By Language” tab. This app can easily run in the background while playing music, enabling you to multitask. 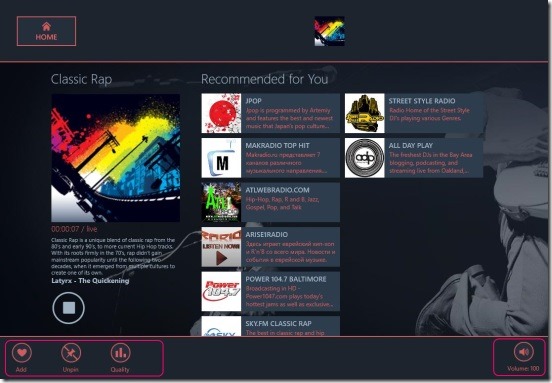 Radio Paradise is an ad free Internet Radio app for Windows 8. It fetches music from the Radio Paradise servers and shows the playing song in a neat and uncluttered music player window. The music player’s background keeps updating automatically, and you can also view the lyrics of the song that’s being played via the Lyrics button. The app has aptly positioned controls at the bottom, and supports background playback and docked view for multitasking. You can also change the audio quality of the track being played to say, high, if you have a good internet speed, or to low if your internet speed is less. 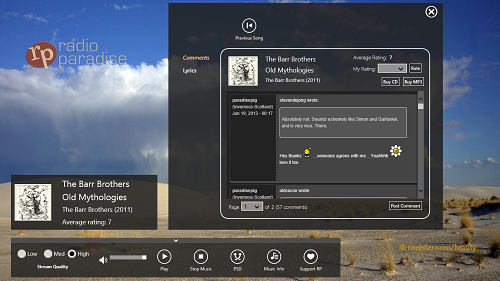 App Radio is one of those apps which provides access to so many radio stations, that it covers almost every genre of music. If you have this app installed and a working internet connection, you wouldn’t need to purchase music CDs anymore! The app’s main screen has sorted radio channels according to genre. Clicking on the thumbnail of a radio station will begin its playback. The app supports docked view and background playback for multitasking, and also supports changing the color scheme of the app to make it more appealing to the eye! 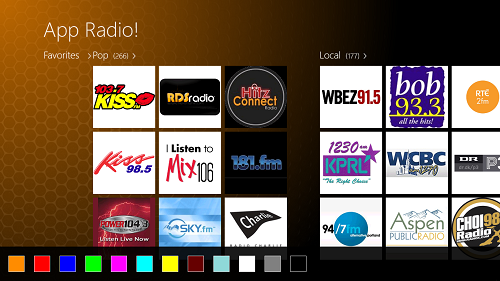 RadioSlick grants you access to over 5000 radio stations of various music genres like Electronica, Country, Hip-Hop etc. The app has a categorically sorted main screen where only the genres are displayed to keep the main screen clutter free. Upon clicking on the genre, the radio stations belonging to the clicked genre are displayed, and clicking on a station begins the playback. The app supports pinning the tile of your favorite radio station to the Start Screen, and supports docked view and background playback. 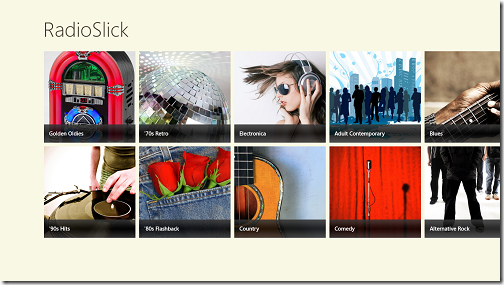 BBC Radio Player is another great internet radio app, straight from BBC. The app contains a vast collection of internet radio stations owned by BBC, and you get latest music, news, etc. which can be played easily by clicking on the thumbnail of any radio station present inside the app, upon which you will be taken to the player screen which has aptly positioned and neat playback controls. The app’s looks very polished, and can run smoothly in the background without any qualms. 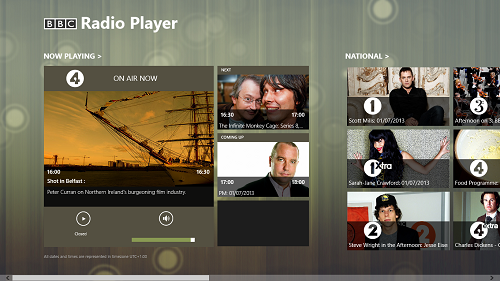 This concludes our list of 5 Internet Radio Apps for Windows 8. Do try them out and let me know of your experiences with these apps!