Here’s a list of 5 prayer reminder extensions for Chrome which can be used by people of Islamic faith to make sure that their daily prayers are never missed. Prayer reminders that I tested will ask you for your location and using that give accurate times when prayers need to be performed. Reminders can be setup a certain number of minutes beforehand, before the prayer time, like 5, 10, 15, 20, so that you don’t forget about it. With the reminder setup, Chrome will activate a notification which tells you when a prayer needs to be performed, based on your location.

Let’s see how exactly do these pray reminders work. 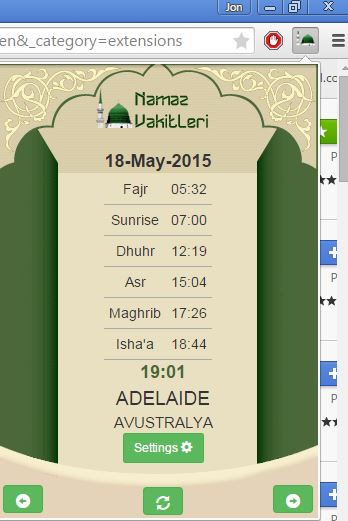 Prayer Times by Namaz is a prayer reminder extension for Chrome which installs itself to the top right corner of the screen. During the initial setup, you’ll be asked your country of residence, region and number of minutes beforehand that you want the reminder to be activated.

It’s possible to turn on Adhan, or call to prayer. With those things setup, the extension will give you a time table for your prayers, and it will also work in the background, giving you reminders for when prayer times are needed.

Get Prayer Times by Namaz. 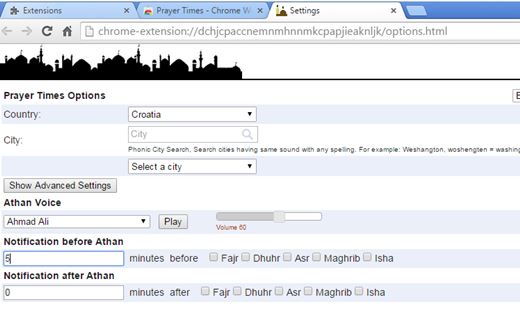 Prayer Times by Solutions Collections offers a much more configurable prayer time table. Everything is again based around selecting a location. That’s the first thing you need to setup.

Once you’ve setup a location, extension lets you configure the voice of the prayer call notification, from several dozens of Imams. Number of minutes before the notification goes off can be setup for each individual prayer. Advanced settings allow you to change the calculation method for calculating the prayer times.

Get Prayer Times by Solutions Collections.

Also, have a look at Free Bible Presenter For Linux, Windows, Mac: softProjector. 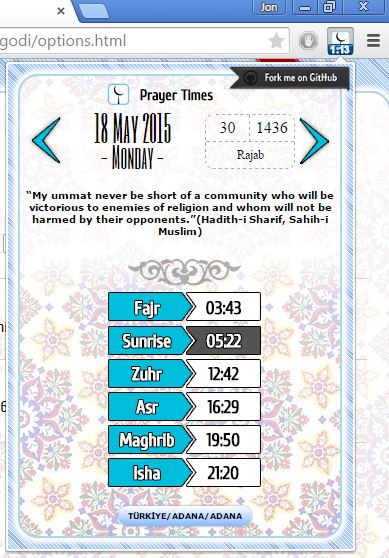 Prayer Times by Software doesn’t have quite as advanced set of features as the two previously mentioned prayer reminder extensions.

It’s much simpler. The same top right corner icon is available. Clicking on it opens up a prayer schedule. Countdown timer can be seen inside the icon, which counts down until the next prayer. Open up extension settings to tweak prayer notifications.

Get Prayer Times by Software. 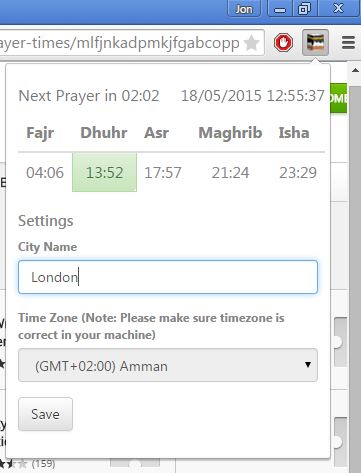 Islamic Prayer Times is an even more simpler prayer reminder extension, where the entire prayer reminder setup is done from inside the top right corner drop down window.

Select the location and you’re good to go. Times for each prayer are going to be showed at the top of the drop down. Top left corner tells you how many minutes are left until the next prayer time.

Also, have a look at Athan (Azan): Automatically Play Azan 5 Times a Day. 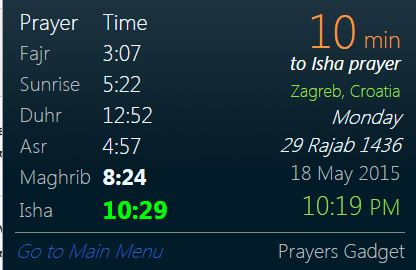 Prayers Gadget is a prayer reminder app, perfect for the Chromebook because it lets you setup an actual widget with prayer times which can be active on the desktop.

Prayers Gadget can also be used on non-Chromebook computers, if you need a prayer time widget that’s integrated with your Chrome web browser. Open up settings to tweak everything. Several different skins are available.

Prayer Times by Solutions Collections is my favorite. It’s my favorite mainly because it offers a lot of settings that you can tweak. Close behind is Islamic Player times, because it’s on the opposite end, it’s very simple. Let me which one you’d like to use in the comments down below.