Here’s a list of 5 sleep timer apps for Android, which you can use to improve your sleep by turning off music apps, video players and any other app that you might have running before going to sleep. We all like to play with our phones in our beds, but sometimes when we fall asleep they continue to play music, for example, which can wake us up needlessly and also spend precious battery life. Sleep timers can prevent all those things, and more.

You might not see it, but Sleep Timer (Turn music off) is actually running in the image below. 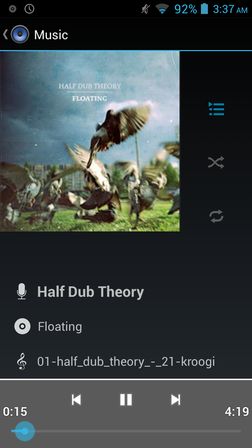 This sleep timer app has a simple interface where it takes two steps to setup a sleep timer. First you turn a dial to adjust the number of minutes you want the timer to count. After that you run the default music player and start playing music. Timer works in the background (see top left corner status bar). As soon as time runs out, timer kills the music player.

Get Sleep Timer (Turn music off).

Sleep Timer (Music&Screen Off) works on the same principles that previously mentioned sleep timer app does. 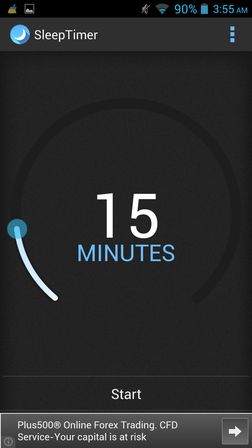 Using a dial you’ll need to setup the number if minutes in which music app that you have to run is gonna be turned off and the screen dimmed down. That way you save battery and you can sleep uninterrupted.

Get Sleep Timer (Music&Screen Off).

Super Simple Sleep Timer is very simple to setup, and it can shutdown either a particular music app (of your choice) or all the apps at once. 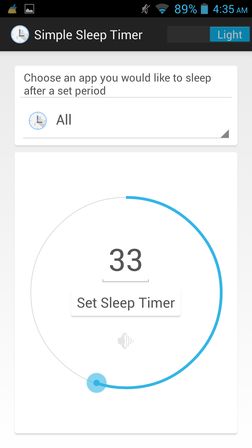 For this particular sleep timer I decided to setup a half an hour time frame in which I would presumably fall sleep, and I decided to turn off all the apps once the timer is up. Alternatively you can use the dropdown selection to change the selection from all apps to just the music apps.

This sleep timer has a lots of advanced features. It will detect automatically all the usual apps that we might be using while in bed, right before sleep, web browser, media players, ebook readers, etc. 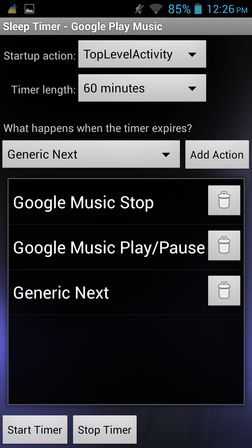 Once you select an app, you’ll be given an option to configure the exact action you want to be completed after the timer completes. In the case of a media player, this can be shutting it down, pressing pause, etc.

Get Sleep Timer by Deviation 6.

Despite its name, Music Sleep Timer isn’t just for stopping music on a sleep timer. It can also be used to turn off WiFi, Bluetooth, turn off the screen and more. 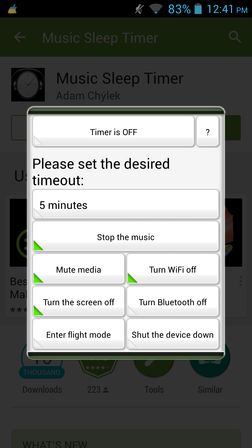 It’s also possible to perform other actions while the player is open, not just turn it off. For example you can mute it. For extreme cases where you don’t know what exactly you wanna do, there’s also an option to completely shutdown the device.

All the apps mentioned on the list above are similar in functionality. I would give Sleep Timer by Deviation 6 a small advantage, because it has the best selection of features. Let me know which app you think is best in comments down below.