Amphetamine is a free system utility for Windows which you can use to prevent screen savers, sleep, shutdown or restart of the PC while the application is running. What you want prevented from happening can be tweaked, so if you only want to prevent shutdown or restart for example, you can do it with Amphetamine. Same thing goes for preventing screensavers, sleep, restart or shutdown.

First thing that you’re gonna see when running Amphetamine is the configuration window where you can configure how it will work. Preventing screensavers, sleep, shutdown or computer restart isn’t the only thing that can be setup. By clicking on the Actions button from the left sidebar you can schedule tasks that are gonna be executed in case your computer decides to shutdown or the screensaver decides to come up. 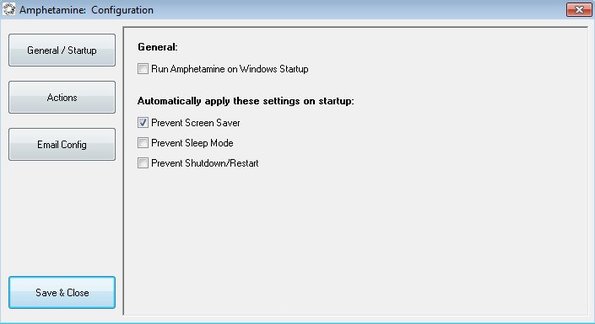 These tasks will of course be executed after the screensaver has been prevented from appearing, or computer stopped from going into sleep, shutdown or whatever it is that was about to happen. Entire right section of the interface will show all the settings that you can tweak.

Key features of Amphetamine are:

Amphetamine is intended for system administrators who need to keep the machines running at all times, without allowing them to go to sleep, shutting down or anything like that. It’s also possible to setup Amphetamine so that it runs with the system, so that it can prevent screensavers right away after the system starts.

How to prevent screensaver, sleep, restart, shutdown with Amphetamine

From the first window that comes up, which can be seen on the screenshot above, select what you want to prevent from happening, screensavers, sleep mode, shutdown or restart. Amphetamine prevents shutdown by leaving its process running in the background which will not allow Windows to turn off. 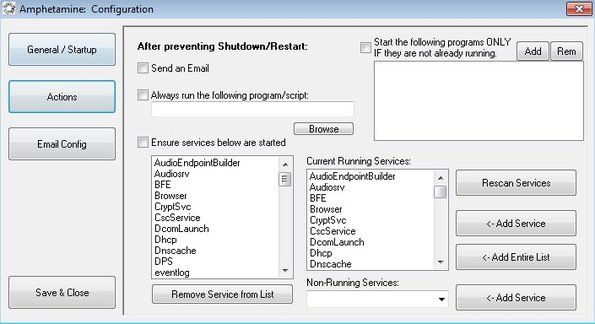 Next if you would like to execute tasks after screensaver, sleep, restart or shutdown is prevented you’ll have to open up Actions. There setup the file, script or application that you want to run. 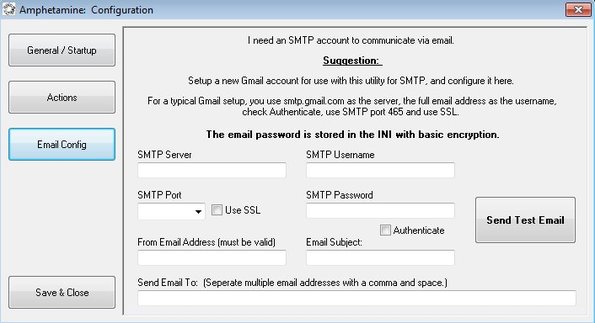 Lastly you’re gonna have to configure email, if you want to receive notifications that screensaver, sleep, restart or shutdown has been prevented. Once you’re done with all that, click Save and Close down below to save settings which is also gonna minimize the app to system tray. It will work from system tray and prevent screensaver, shutdown, restart or sleep.

Amphetamine is a great way how you can prevent screensaver, sleep, shutdown or restart from running whatever it is that you left your computer doing. It can be downloads, audio/video conversion or processing and everything in between. When it comes to screensavers, you can prevent them from happening easily by tweaking Windows settings, but for all the others you’ve gonna need the help of Amphetamine.