Feedly has become the most popular feed reader after the sad demise of Google Reader. And after using it for quite some time, I actually find it better than Google Reader. The feature that I find myself using most is “Saved for Later”. So, when I am accessing Feedly on my Android phone and I come across an article which I want to read in detail later on my PC, I just mark it as “Saved for Later”. One thing I noticed that there are a specific class of articles in some specific feeds that I always mark as Saved for Later. So, I thought of finding some way to automatically mark those items as Saved for Later, and found that the solution is much easier than I thought. 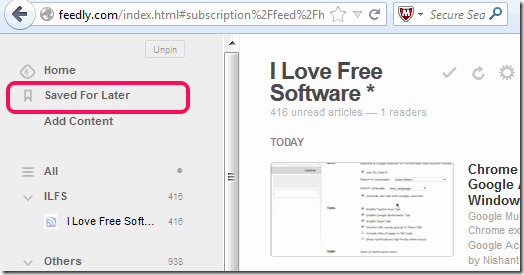 How to Automatically Mark RSS Feeds Items as “Saved for Later” in Feedly:

The service which I will use for this is IFTTT (read more about it here). IFTTT has a channel for Feedly as well. It has multiple possible Actions for Feedly. The one that we are interested in is “Save For Later”. Basically, this action lets us set any feed item as “Saved for Later” in Feedly.

How To Mark All Items in RSS Feed as Saved for Later:

Voila! All done. Now, whenever there will be a new item in the RSS feed, it will automatically be marked as “Saved for Later” in Feedly.

I am guessing you don’t want to save all the feed items as Saved for Later, and instead want to save specific items only. Don’t worry, there is a way for that (two, actually).

How to Mark Specific RSS Feed Items as “Saved for Later” in Feedly:

Let’s say you want to automatically save only specific feed items in Feedly. For that, there are two options:

If you want to save items that contain some specific words, then you can do that via IFTTT itself. The process will be exactly same as above, with a minor variation.

Follow steps 1 through 3 as explained above.  In step 4, instead of choosing “New Feed Item”, choose “New Feed Item Matches”. This will show text box in which you can provide the keyword or a phrase that you want to search for in your feed. For example, if you are interested in only those feed items that contain “iPhone”, then add iPhone in that box. This does not support any search operator, or multiple comma separated keywords. Below that, provide the feed source. 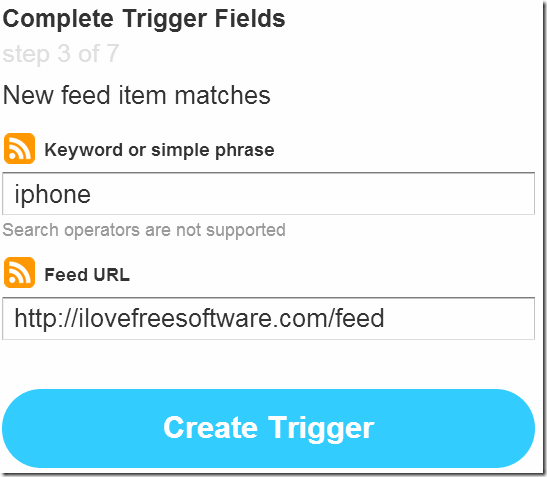 After this, just proceed with the steps mentioned above. This will save only those items in Feedly that have the keyword or phrase that you entered.

Wait. What if you actually wanted a more tricky filter criteria to select feed items. Like, what if you wanted to save only those feed items that were written by Ishan and DID NOT have iPhone as text in them? I am glad you asked.

If you read lot of feeds daily, then for most of the items you would just read the title and move over. But there would definitely be a category of feed items that you always want to read in detail. By following the steps above, you can directly mark those items as “Saved for Later” in Feedly, instead of going through all the feed items. I have done this with a few of the feeds I follow and it has been working pretty nicely for me. Do try it out and let me know how it goes.