If you want to mix different songs or tracks to create something new then you can use these tools. You can think of these software as DJ software and you can mix songs to play in home and parties. To mix songs, you just have to select the songs that you want to mix and then choose the different parameters. In some of the following software, you can even opt to add some audio effects too. After mixing the songs, you can directly export it or you can record the final audio and then save it. 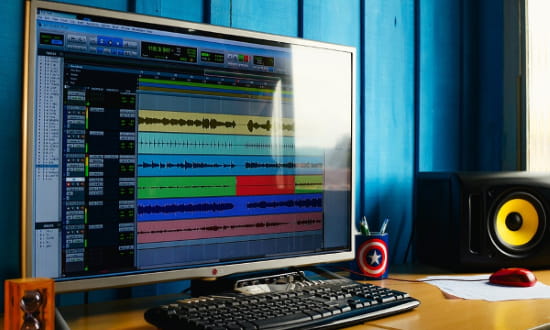 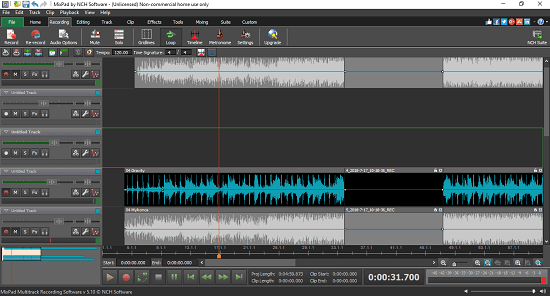 Mixpad is one of the best free audio mixing software for Windows that you can try. It lets you create, mix, and record multiple tracks all together to produce awesome music. You can load unlimited tracks in it and then play them together. While the tracks are playing, you can change the different audio parameters. You can change the volume level of tracks separately, mute a specific songs, make a song solo, and even apply audio effects like chorus, cross-fade, amplify, high pass, reverb, and so many others. And while mixing the songs, you can record the final audio output as well. In addition to that, this software allows you to export the final mixed tracks to an audio file too. However, this software is free for non-commercial use only.

Get this software from the above link and then install it on your PC. After that, you can open it and then load the tracks it in by importing them from your PC. Use the “Load” button to add tracks. You can add as many tracks as you want and then play them. Next, from the left side, you can tweak the various parameters to mix the songs in your desired way. Also, you can apply sound effects. For that, use the “Effects” menu of the software. Finally, when you are done with the mixing, you can export the mixed audio that you have created as an MP3 file. For that, use the “Export Mix” button from the toolbar of the software. 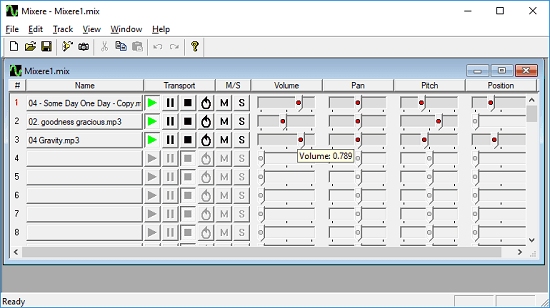 Mixere is simple, yet powerful audio mixing software for Windows that you can use. It is an open source software as well that lets you play 64 songs at a time on its interface and help you mix them. You can then opt to mix the songs by simultaneously playing them. And during the mixed tracks playback, you can change the parameters like volume, pitch, pan, position, mute, solo, and some others. Here it doesn’t allow you to record the mixed audio or export it. But you can save the state of the songs to a file. It lets you export the current configuration as a MIX file and you can easily import it back.

You can use this software easily by just downloading it from Sourceforge. Use the above given URL to get it and then directly run it. It runs in portable mode. The interface of the software is a bit classic and after opening it, you can start adding songs in it that you want to play and mix. Just right-click on any cell of the Name column and then select any MP3 file from your PC. Add the songs you want to mix and then start playing them. Change the different parameters to get the desired audio effects and then save this configuration to a MIX file that you can import later. 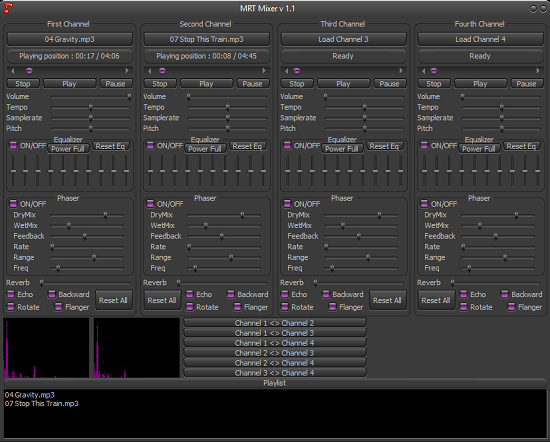 MRT Mixer is a professional looking audio mixing software that you can use on your PC. Here it allows you to mix any four songs by tweaking a lot of parameters. After adding the songs in it, you can play them and change their volume, tempo, pitch, sample rate, phaser, echo, and some others. You can change all these parameters for each audio track separately to get a perfect mixing of the songs which you think is great. The software offers a very simple interface with a lot of controls. You can use different sliders to change different parameters and add the effects in the final track that you want. Simple as that.

Download the software using the above URL and then you can start using it. Just add the songs from your PC that you want to mix. For that, you can use “Load Channel” button and then specify an MP3 file in each deck. Next, hit the play button to start playing them. While the songs are being played, you can tweak the different parameters using the different sliders. Keep changing the parameters until you hear the perfect blend of the music. You can use this software in the same way whenever you want. 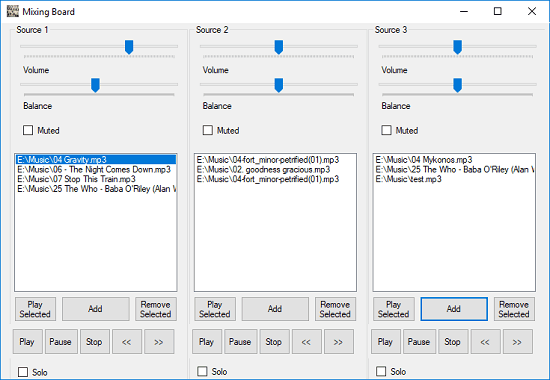 Audio Mixing Board is an open source software to mix up to 4 songs by importing them from your PC. You can load different songs in it and then mix them. It offers 4 different sections in which you can add songs by importing from your PC. And you can even add more than one song but choose only one for mixing. However, here it doesn’t let you export the combined songs neither it lets you record it. But you can use some external recorder software. You can only mix the songs by tweaking the parameters like volume, balance, play the song in solo mode, mute any song when it is playing and some others. It offers a very simple interface where you can add songs and mix them. Simple as that.

Get this software from above link and then install it. After that, run it and then start adding the songs in it that you want to mix. After mixing the songs, you can listen to them and then change them as well. As there are no options to save the mixed tracks or record them, so in that case, you can use some PC audio recorder software. Those software will record whatever audio is coming out from the output devices and then you can save that audio as a file.

Mixxx is actually a DJ mixing software that you can even use as an audio mixing software. Here it offers you 4 different decks in which you can add songs, play them, and mix them. You will find all the necessary tools in it to perfectly mix songs. While playing 4 songs altogether, you can change the different parameters for each song separately like master volume, volume balance, sync rate, frequency, gain, audio effects, and some others. The interface of this software is very polished and while using it, you will think that you are actually using a fully functional DJ panel to mix songs.

To use Mixxx as an audio mixing software is very simple. Just get it from above and then you can install it. Next, launch it and then start adding songs in it. To add songs, you will first have to configure the songs library in it. Next, add songs in different decks and then play them. And during the playback, tweak the different parameters of the songs to make the final output track awesome. 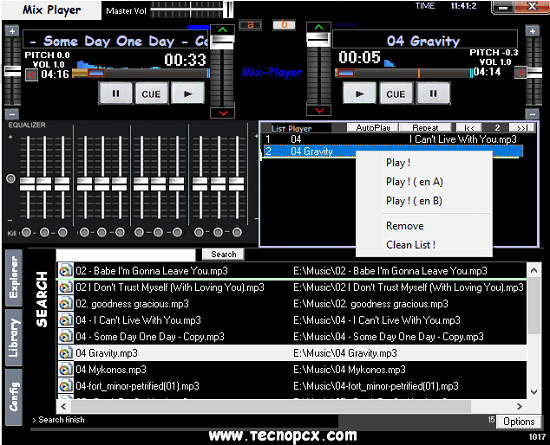 Mix Player as the name suggests is a music player software that supports playing multiple songs as well. Here it offers two different decks in a single software and you can separately add songs in that. You can use this software to mix any two songs easily and then change the different parameters to make the final music more compelling. It offers a fully functional equalizer that you can use to control the various aspects of a track. Also, you can change the volume of the tracks separately. The interface of the software looks like a music player and you can add different songs in the playlist and then play them in different decks of this software easily.

Simply download this software from above and then start it. It is a portable software so you can even run it from a flash drive. After opening it, add the songs in the playlist and then play them in any deck. To play the song, right-click on it and then choose in which deck, you would like to play it. And when the song starts playing, you can use the equalizer from the software to change the different parameters. Apart from this, you can separately change the volume and pitch parameters as well. You can use any PC recorder software along with it to record the songs that you have mixed. 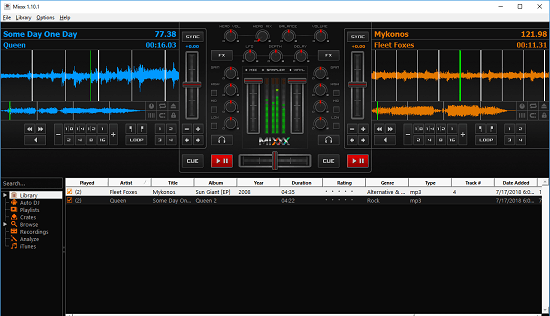 X-Mixxx is another free audio mixing software that you can try on your Windows PC. The interface of this software is like the above software but with more controls. There are two decks in this software and you can separately load songs in each deck and then configure different parameters to mix them. You can load your songs library in its playlist manager and then load songs in the different decks and play them simultaneously to mix them. It offers you tools like volume changer, tempo changer, gain, balancer, sampler, depth changer, leveler, head volume, master volume changer, and many others. There are different sliders and knobs to change different parameters and then listen to the final song.

It is also a portable software and you can run it right away by downloading it from above. After that, you can start adding the songs in it. Use the lower section of the software to browse the songs from your PC and then load them in the different decks. After that, play the songs and mix them. You can use the different controls which are given in the software to change the volume, pitch, gain, sampling rate, etc. You can even play a song in loop or do whatever you want. 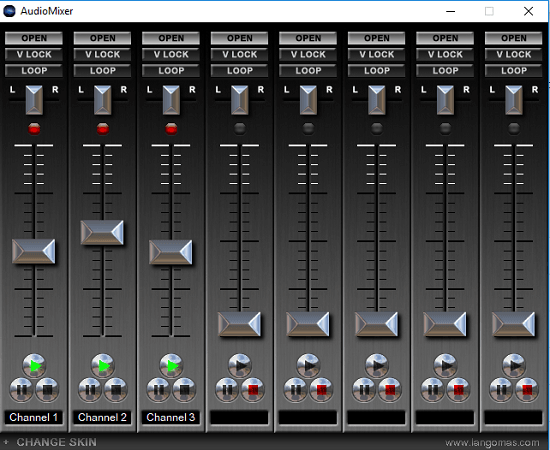 Audio Mixer Lite is very simple audio mixing software for Windows. It allows you to use 8 different songs from your PC and let you mix them. You can play all the songs together and change various parameters too to make the final audio nice. It gives you audio tweaking options like playing the songs in loop and locking the volume for songs separately. While mixing songs, you can have different volume levels for each song. However, here this software doesn’t allow you to export the final songs as an audio file. You can only listen to the songs live only. And if you want the mixed songs, then you can record them using any PC audio recorder software.

The software is simple and straightforward. There is no need for installing it as it runs in portable mode. Just get it and run it directly. After that, just load songs in it that you want to mix. It allows you to add 8 different songs for mixing. You can play the songs and start mixing them. Use the different volume levels for different songs to produce a unique audio effect. You can play the songs live through this and if you want to save the mixed tracks, then use any PC audio recorder.