The write-up discusses 5 best DJ software for Windows 10. The computers that we today are astonishingly versatile machines, capable of handling multiple tasks without requiring so much as a breather. Not only do they help use be more productive, but can be used for fun and leisurely activities just as well. For example, you can use your computer for mixing up your favorite tracks and be the party’s DJ. All you need is a capable DJ mixer application. But there are so many of them out there, so which ones are the best? Confused?

Not a problem, as this article is all about the best DJ software applications. These programs let you easily mix multiple audio (and even video) tracks, and include features like multiple virtual decks, FX effects, waveform scratching, track synchronization, and much more. Ready to mix and groove to some tunes? Let’s jump in, and find out more about 5 best DJ software for Windows 10.

An absolute powerhouse, Mixxx is one of the best DJ software applications out there. Bursting at the seams with all kinds of features, Mixxx includes just about everything for making your computer a full blown sound mixer. It includes dual decks, with advanced controls for each of them. You can simply load up individual tracks (digital music files) in these decks, and start mixing. The decks features a scrolling waveform display with markings for beats and cue points, which can be virtually scratched just like the real vinyl records on turntables. There’s also a whole song waveform that can be used to quickly seek to any position on a track. And that’s not all. The time stretch feature can be used to alter the speed of songs, and up to four hotcue points can be triggered or dropped. The seemingly endless of goodies also includes auto DJ mode, playlist & library management, EQ and crossfade controls, and much more. Heck, you can even record and broadcast your mix, and stream it over the Internet. Find out more here. 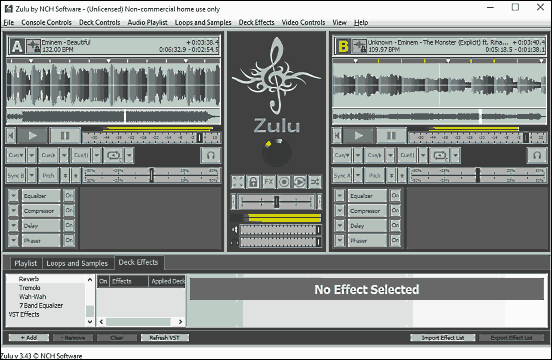 It’s almost surprising that Zulu DJ is a free application (basic version for non-commercial use only), given the truckload of goodness it possesses. Lightweight yet powerful, Zulu DJ can effortlessly handle all kinds of audio mixing tasks. The fully loaded user interface is comprised of dual audio decks (marked A and B), and loading a track onto a deck is as simple as dragging and dropping it from the playlist pane to the deck. When loaded, Zulu DJ automatically analyzes each track and displays information such as BPM, along with the waveform display for  scratching and seeking. For both the decks, there are a variety of audio tools such as Equalizer and Phaser are available. Apart from that, Zulu DJ includes a diverse array of deck effects like Flanger and Reverb. Then there are features like real-time pitch and tempo adjustment, beat synchronization, real-time effects, section looping, and support for a wide variety of audio formats. 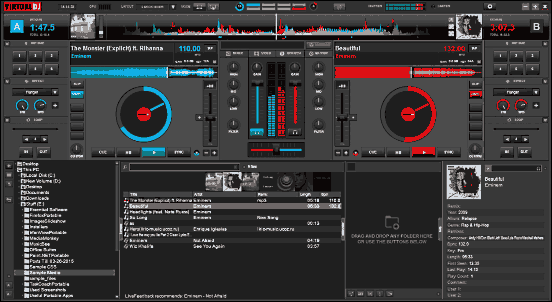 There are a lot of things that VirtualDJ excels at, and the UI is definitely one of them. Sporting a fully packed and an awesome looking interface, VirtualDJ is a beastly DJ program, chock full of features. Although the default layout features the standard two virtual decks, VirtualDJ supports up to an astonishing six virtual decks at a time, taking music mixing to its extreme. What’s more, each of the decks and its associated virtual controls are color coded, which makes it even easier to identify them when tinkering with the playing tracks. VirtualDJ includes multiple controls for working with hot cues, and also comes with a bunch of cool effects such as Flanger, Distortion and Slicer. And yeah, there’s track synchronization and waveform scratching on board as well. Click here to find out more. 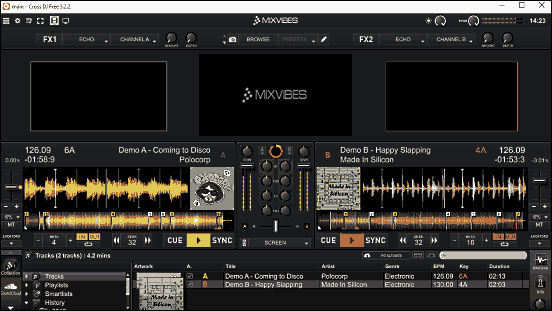 One of the few applications that lets you mix not only audio, but video as well, Cross DJ is the perfect DJ software for revving up the party. The program features a straightforward interface, and sports a dual deck layout for hassle free mixing of two tracks. Just as in case of VirtualDJ, the individual deck controls are color coded, and all you have to do to get started is drag and drop the tracks onto the decks. The loaded tracks are instantly analyzed and the waveforms for them are displayed, which can be used for scratching and seeking. Apart from that, track synchronization and hot cues are there too, along with slider controls for changing things like audio gain and crossfade. Then there’s a handy selection of effects like Echo and Flanger with Boom, and you can specify the amount and depth for these too. Read more here. 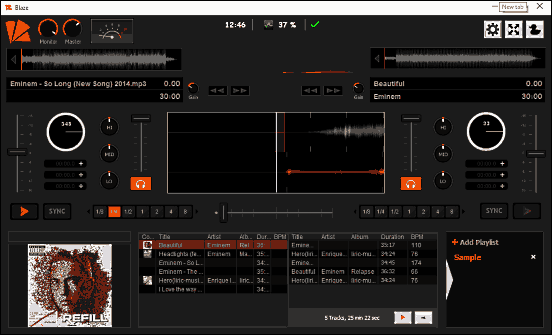 Rounding off the list is Blaze, an incredibly capable free DJ program for all your partying needs. You can add multiple directories having audio tracks as library locations, and load up the tracks for playing and mixing. Blaze includes a spectrum colored waveform display for the playing tracks, which can be used for effortless seeking and scratching. Not only that, the UI is full of virtual controls for adjusting everything from gain to track synchronization. Blaze can automatically detects the track BPM, and includes features like auto gain and timecode support as well. You can also tweak things like the sound API, and the pitch range for sound control. And of course, all those fancy effects, cues, and loops are there too.

Note: The free version closes automatically after 30 minutes, but you can open it again.

Whether you want to just have some fun mixing your favorite tracks or host a full scale party, the above discussed DJ mixing applications should come in really handy. Take them for a spin, and shout out your thoughts in the comments section below.