Gapless playback is a very nice feature for the music lovers. The best example of gapless playback can be seen in the Groove Music Player of Windows 10. In other words, the gapless playback is also called the cross-fade effect. In this, the music player automatically identifies the silence at the end of the song and then quickly switches to next song in the queue. Basically, it keeps an advance part of the song in the cache to detect silence and if there is any then it starts playing the other song. Simple as that. 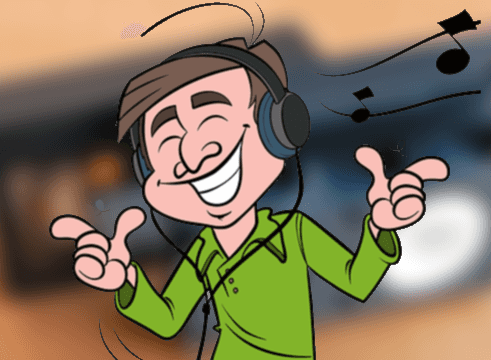 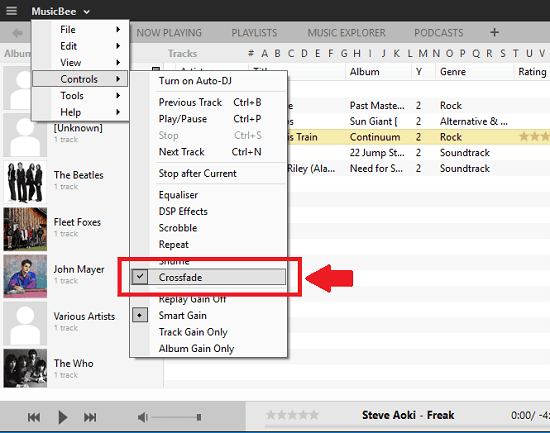 MusicBee is quite popular music player as well. You can enable the crossfade effect in it in a single click. You can get it from the above link if you don’t have it already. After that, you can open it and load your songs library in it. Next, before start playing the songs, you can enable the “Crossfade” playback. You can enable that by using the Controls > Crossfade menu. For that, just click on the drop down button from the toolbar of the player. After this, you can start playing your song and you will notice if there is a silence at the end of a song, it will switch the playback to the next song in the list. 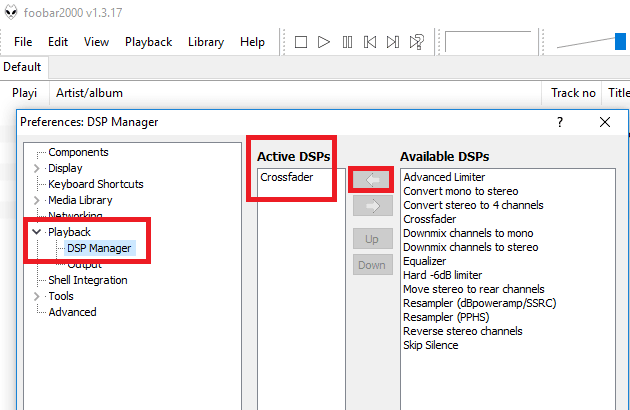 Foobar2000 is an open source music player software that also features gapless playback. There are other numerous features in this music player as well that you can use. It comes with the built-in support for CUE sheets, ID3 tags editor, visualizations, and support for a lot of plugins. However, just like above music player, you will have to first enable the gapless playback feature in it to use that. And the gapless playback feature in Foobar2000 is called “Crossfader”. You can activate it in the preferences section of this software and then start listening to the songs with no silence or break in between them.

Winamp is another free and a very popular music player that I am sure every computer user knows about. It is very old and the loyal users of Winamp still use it. And the gapless playback feature in Winamp is quite an advanced one. Although, it is not enabled by default, but while enabling it you can opt for other features that will help you configure an intelligent gapless playback option. Here it lets you specify how much seconds of the song you want to cache and what should be the level of silence in the songs it should tolerate in the playback. You can specify the level of silence detection in terms of “dB” and then start your playback. It will skip the playback to the next track in the queue according to the parameters you have configured.

For configuring the gapless playback in Winamp, you can follow these steps.

Step 1: Launch Winamp and then open the Preferences section of the software. You can either use Ctrl+P or you can use the Options > Preferences menu to do the same. 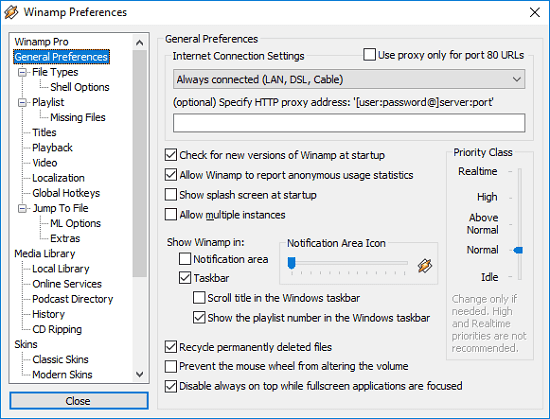 Step 2: Now, from the Output section, click on Configure button and then set the buffering options. 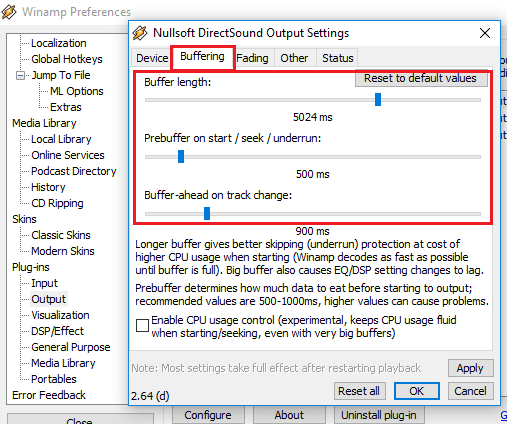 Step 3: Switch to the “Other” tab and then here you can enable the “Silence remover” option. Also, you can specify at how much level of silence it should switch the playback to the next track. 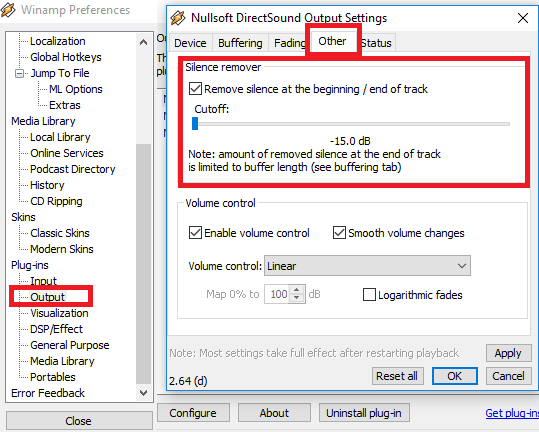 Step 4: Now, you can comeback to the main interface, load your songs library and start playing it. The playback will be gapless by now. 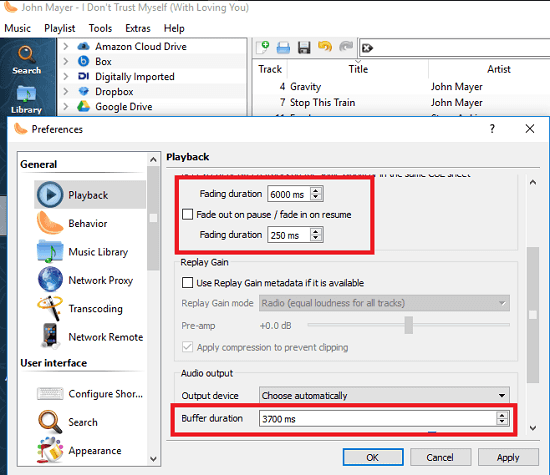 Clementine is yet another free music player with gapless playback. Just like all the music players in this list, it offers you tons of nice features that you can use to listen to your music in your own way. The best part about this music player is that it comes with the built-in support of Google Drive, Dropbox, etc. It is a cloud music player and not just from the cloud storage but you can play songs in it from multiple other sources as well.

It offers a very nice interface where you can add your songs library and play them in gapless playback manner. However, just like in all the other music players that I have explained, you will have to enable it first. After enabling it, you can start playing your songs and it will play them by skipping the silent part from their end.

Using this player is very simple. Just get it from above URL and then open it. After that, from the Tools > Preferences menu you can open the Preferences window. Next, from the Preferences window, you can use the “Playback” section to enable the fading and buffer duration. After configuring these, you can return back to the main interface and then add your songs in it to play them. Those tracks will play in gapless playback manner. 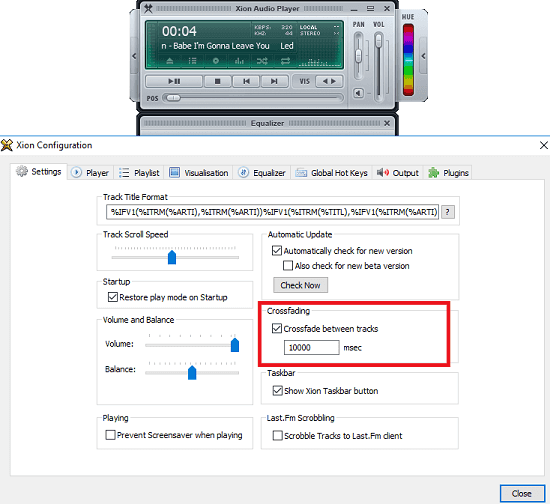 Xion Audio Player is the last music player in my list with gapless playback. It is a simple and a lightweight music player that you can use to listen to the songs on your PC. Well, not exactly the gapless playback but there is a cross-fading feature in this software that you can use to achieve that. Basically, then crossfading works differently here. Rather than detecting the silence in the end of track, you can opt to automatically skip to next track when there are specified number of seconds remaining in the current track to finish. It lets you specify the time in terms of milli seconds and then it will keep switching the tracks accordingly.

Xion comes as an standalone software as well as in portable mode. You can download it from the above link and then you can run it. Next, open your music collection in it and then configure the cross-fading. For that, just right-click on its toolbar and then choose the “Configure” option. After that, from its configuration window, you can configure the cross-fading parameters. Finally, get back to the player and then start playing your songs in gapless playback manner. Simple as that.

These are the best free music player software with gapless playback. You can use these to listen to your songs library seamlessly without having to wait for the next song while current one finishes. The following software will automatically play the next song when they will detect the silence at the end of the currently playing track. So, if you are looking for some free music player software with gapless playback, then you can try the above mentioned software.