MyTranslator8 is a free language/text translator app for Windows 8. The app has a very clean UI, that allows users to translate text from one language to another simply by entering it into one box, selecting the source language and target language from the drop down menus, and then clicking on the translate button. The app has a very unobtrusive interface that does not get in the way of performing the basic task of carrying out translations, and this makes the app really unique. The app is uncluttered, and being ad-free makes it a great translator app.

MyTranslator8 is less resource hungry, does not take a toll on your battery, and at the same time performs the translations with a lot of ease. The app is totally optimized for all kinds of devices, touch and non-touch devices alike.

MyTranslator8 is available for free via the Windows App Store.

Features of MyTranslator8 App For Windows 8…

MyTranslator8 is available for free via the Windows App Store. Once you are done installing the app, run it by clicking on its icon from the Start Screen. Upon doing that, you will be presented with an interface on your screen that looks like the below screenshot. 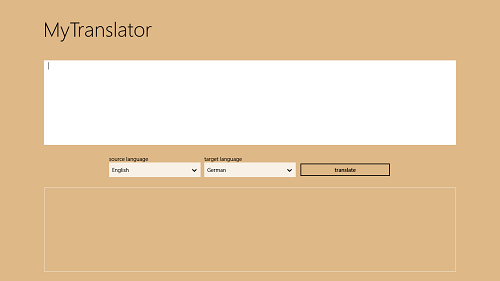 In the above screenshot, there are just three controls in total, which are pretty much self-explanatory to begin with. Anyways, here is a detailed account of what these controls do.

Translate: Clicking this button translates the text, keeping the parameters set in the Source Language and the Target Language menus in mind.

Now that we have covered the basics of using this app, let us go ahead and test out the app by translating something. I have selected the source language as English (because I typed in English), and the target language as German. (see below screenshot) 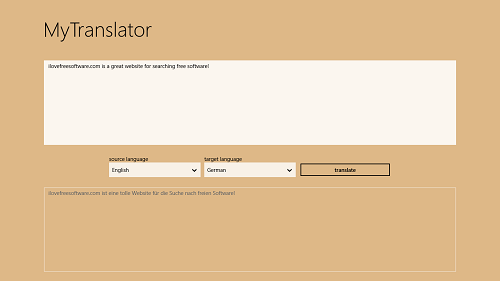 Let’s take a closer look at the translation…

The text I entered…

The text that this was translated to…

It is worth stating here that this translation literally took about a second to be performed! Now that was fast!!!

Well, this pretty much covers up the basics of using the MyTranslator8 app for Windows 8. You can also check out another great translator for Windows 8, which goes by the name of Translate.

MyTranslator8 is a great app to have on your device if you frequently have to work with anything that involves the usage of any kind of foreign language. The app can translate a lot of languages from one language to another, and is worth checking out by people who need the same. Undoubtedly, this is one of the best translator apps on the Windows App Store as of now.