Translate is a free language translator app for Windows 8; available in Productivity section of Windows 8 Store. Using this app you can translate any selected text or words from one language to another. 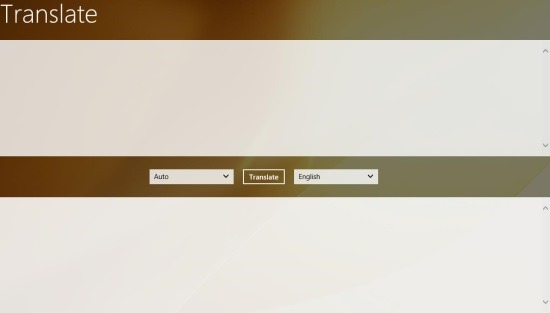 About This Free Language Translator App For Windows 8:

How To Translate Text in Windows 8;

Translate is very easy to use. Let’s see the steps on how to use Translate:

Step 1: Copy a word or text and open the installed app.

Step 2: Paste the copied content in the upper block.

Step 3: Choose the language to which you want the context to be translated to on the right side.

Step 5: You can now view the text in the language that you know.

This free language translator gives you an advantage, if you are using Windows 8 apps of Start screen. Just open any of the Windows 8 Start screen apps like: Bing, Mail, etc. and highlight the text that you want to translate. Press Windows + H button combination to view the translate app in the side bar (like shown in below screenshot). Just click on the Translate app and it will directly show the translation for you.

Let’s have a look at the features of Translate:

Click here to install Translate Windows 8 App. Open this link in Internet Explorer of Windows 8 and click on View in Windows Store. Then the Translate app will open in the Windows 8 Store automatically and there you can click Install button to install the app.

This Windows 8 free language translator is easy to install and use. You can use it to learn languages or translate context that are displayed in different languages.