ShadowImage is a free system partition backup software for Windows which lets you easily backup your system partition, the one where Windows is installed, while Windows is running. Backups do not require you to restart the computer or anything like that. In fact, this is a portable application, which means that you don’t even have to install it. Created partition backups can of course also be easily restored, the same way that backups are created.

Despite doing a very complicated task of creating system partition backups, ShadowImage comes with a very simple interface. It only has two tabs in the top left corner, one for creating backups and another one for restoring created images. 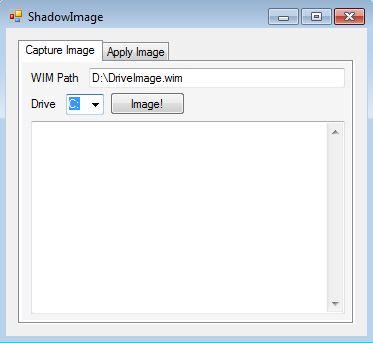 Backups are saved using .WIM disk image format, which is a disk image format developed by Microsoft. Created backups have to be saved on a different partition from the one that you are backing up, otherwise this free system partition backup software can work.

Key features of Shadow Image are:

ShadowImage isn’t only for creating system partition backups. It can also backup regular partitions, where you have only your data saved, but where it’s most useful is when it needs to create a backup of the C: partition, the one where Windows is installed.

Everything is pretty much simple and automatic. To create a backup, open up the Capture Image tab, type in the path where you want to save it, with image name and extension (WIM), select the partition that you want to backup using the drop down menu and after that simply click the Image button to start creating the partition backup. 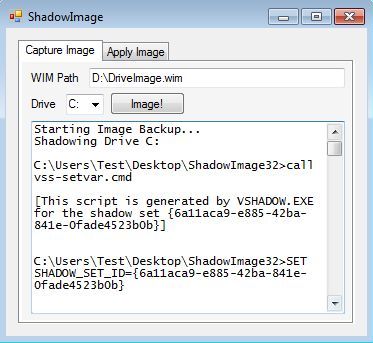 As the backup is being created you will see status messages posted in the window down below. Shadow Image automatically selects files and creates all the backup rules on what’s going to be and what’s not going to be added to the backup that it’s creating. 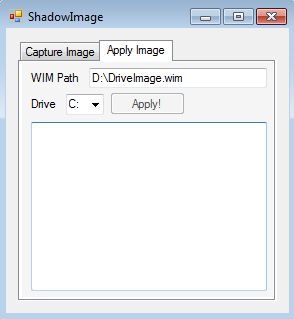 Backup restoration works the same way that backup does, except you need to type in the location of where the backup was created. After that it’s all the same, again select the partition where the backup will be restored using the drop-down menu after. Clicking on Apply will start restoring the files from the selected backup onto the selected partition. Be careful because files are overwritten.

ShadowImage is very easy to use and does everything as advertised. If you would like to backup your system partition but you don’t want to go through the hassle of restarting your computer and going through various complicated steps that other backup software has, try this free system partition backup software and see how it goes. It’s perfect for when virus infections attack the PC and mess up Windows.