Simple RSS Reader is a free RSS extension for Firefox which allows you to receive updates from RSS feeds that you’re tracking from inside the Firefox toolbar. It shows latest feed items below the address bar of Firefox. So, irrespective of which website you are on, you can keep track of latest updates in your subscribed feeds. 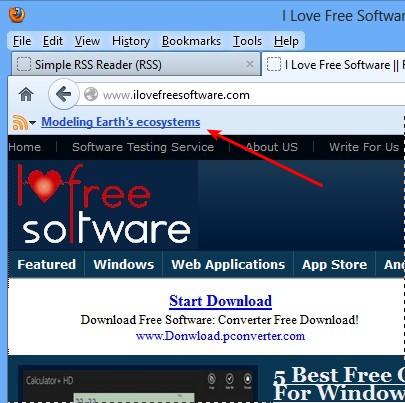 RSS news update line which you can see on the screenshot above is the only thing that you’re gonna see from this free RSS Firefox addon. Menu for adjusting settings is also available, but the RSS feed update toolbar is what you’ll be watching the most. On the image above only the far left part of the RSS toolbar can be seen. 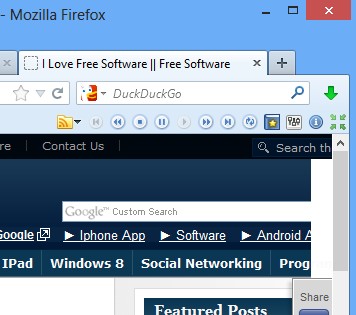 All the way on the right feed controls, the same kind of controls that you see in media players, are available, alongside icons and buttons for accessing settings, turning off the toolbar and opening up feed bookmarks. Feed controls are for moving through feed updates, previous, next, stopping or pausing their rotation and of course for refreshing the feed.

After installation, toolbar should start working right away. In case that you already have RSS feeds added with the Live Bookmarks feature, then you’re gonna see updates show up right away. Those without feeds will get a No Feeds message. 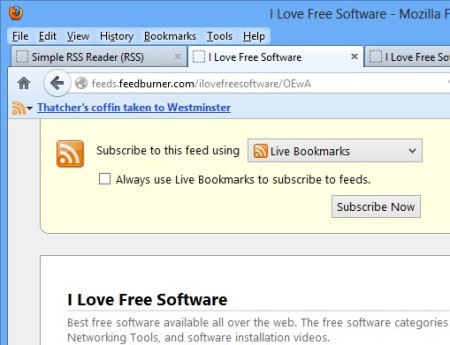 To add a RSS feed bookmark, you’re gonna have to select Bookmarks >> Subscribe To This Page option to add live bookmark for the RSS feed of the web page that you have open. The website of course has to support RSS feeds 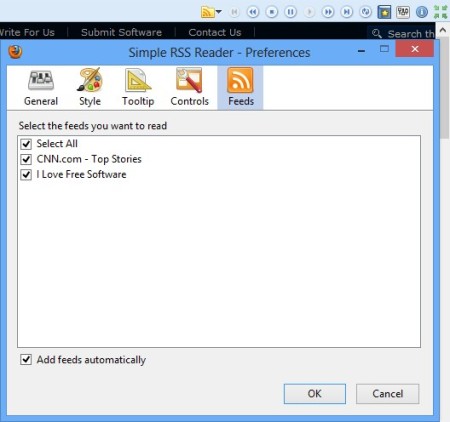 Clicking on the gears icon from the right side of the toolbar allows you to change various different options of this free RSS Firefox addon. The most interesting option to tweak would be the Feeds tab, where you can select which feeds will be shown in the toolbar.

Great thing about Simple RSS Reader would be the fact that it’s not any kind of additional application which you have to install on your system in order to use. It’s just a browser addon, a simple one at that, just like its name says. Large amount of settings can be tweaked. Remember that it works together with the Live Bookmarks. Recently announced shutdown of Google Reader have left many people wondering just what they might use in order to keep up with their RSS news updates. This free RSS Firefox addon might just be the thing you need. Free download.