Universal Media Server is a free UPnP Media Server which can be used in order to stream various different video and audio formats to a very large number of devices like for example smart TVs, smartphones, gaming consoles, media players, etc. This is a Java application, which means that it’s available for all the major operating systems. 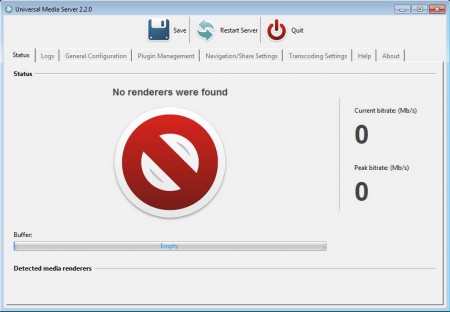 What you see in the image above is the control panel of this free UPnP media server where all the streaming server configuration takes place. At the top we have three buttons for controlling the server, while down below at the bottom you can see the configuration tabs for switching between all the components of Universal Media Server.

Key Features of this Free UPnP Media Server are:

This free uPnP media server is based on PS3 Media Server, which offers similar functionality, but Universal Media Server build on it provides the user with more advanced streaming options, for both video and audio.

How to Setup Media Streaming with Universal Media Server?

Due to the fact that this free audio/video streaming server has a graphical interface makes things a lot easier to set up, but you still need to know what you’re doing. First thing which you should look into is the Navigation/Share Settings tab. That’s where you need to select the folders that you want to share with other devices, among other things. 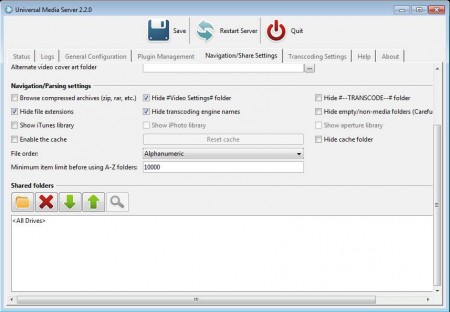 To add folders click on the folder icon down below, selection window should pop-up after which the selected folders should pop up in the list below where they can also be edited. Another thing that you need to turn attention to would be the General Configuration tab. 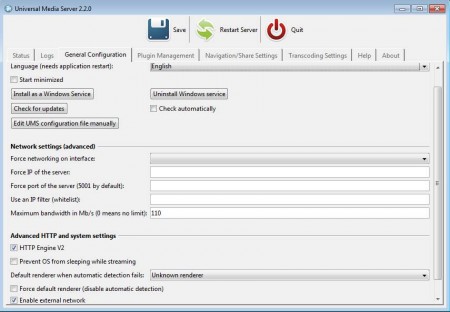 This is where you actually configure network and HTTP settings of your media streaming server. At the top, you can also select how exactly you want Universal Media Server to run, when it’s started with the system. Transcoding Settings tab also hold important settings of the encoders that are supported. When you’re done setting up everything, click Restart above to apply settings, check the Logs tab and if everything is OK, your media streaming server should be up and running.

Universal Media Server is relatively easy to set up, especially when compared with other similar tools which are only offering command line setup of the server. It’s highly customizable, and a very large number of devices is supported. From gaming consoles, Android smartphones to Smart TVs. Media streaming can be up and running in just a few minutes with Universal Media Server so don’t forget to try it out atleast once. You may also try Music Player Daemon, Subsonic, and Groovy Media Player.