Groovy Media Player is one of thousands of free media players available on the internet. But, in order to stand out from a crowd, it needs to have some special or unique features. This review will try to provide answers to that very question.

Features of this free Media Player

The application boasts of a number of features, which is pleasantly surprising considering that it comes from a small software company. It has continuous play, meaning that tracks play without any disturbance. Audio rendering isn’t shabby, but not quite at the level of players such as Windows media Player or Winamp. That is understandable, considering that the company that makes the application is quite a small one. The application also allows users to convert mp3 files to wav format. This creates noticeably better sound output when compared to an mp3 file. The program also has an 8-band equalizer, but the changes aren’t noticeable unless it is played on a high-end sound system. The changes are barely noticeable on laptop or standard desktop speakers.

The website also lists some other ‘features’, but they can hardly be called so. There is an option between showing the time elapsed and the time remaining. Not particularly ground-breaking, is it? One feature that is nice to have is internet streaming. For this, the user needs to provide a URL and the program streams music from aforesaid link. The program also has an ID3 tag editor, so that the user can modify artist and album information. The program also has another nifty feature that allows it to play a number of audio file formats such as FLAC, AAC, MP4, etc. Many other audio players need other codecs to play these files. 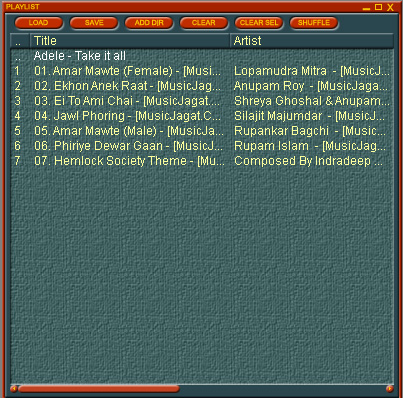 The program is available for download from the webiste. it is a fairly small download  at  just over 4.5 MB. Downloading is quite quick. Installation is simple and quick too. But during installation, the user is asked to download and install the energy community toolbar. This can be very annoying. The program was installed on a Windows 7 32-bit laptop running on an Intel Core2Duo processor. It will run on older processors as well as previous Windows operating systems.

The application is marketed as simple and easy-to-use. At first glance, that seems quite accurate. But once one starts to use it, it seems quite cluttered. The first impression one gets is that it hasn’t been designed with much thought. People used to Windows Media Player or Winamp will take some time getting used to. It doesn’t show much information about the audio file unlike the other media players. There are too many keyboard shortcuts for the average person to remember and the mouse functions aren’t very intuitive.

There are a number of media players available in the market for free. Groovy Media Player is clumsy and difficult to use, with no extraordinary features to compensate for those shortcomings. Players available from big companies such as Microsoft and Apple do a much more thorough job of doing the basic job i.e. playing music, well.