Flico is a free extension to detect landmarks while watching YouTube video. It not only detects the landmarks but also provides details of the landmarks from Wikipedia. It also has the option to see the map view of the area. It also also allows you to view the street view of that landmark. Along with street view and map view it also shows you the list of all the nearby restaurants. It can also be used to know the meanings of unfamiliar words that you come across while watching videos on YouTube.

Every now and then you come across magnificent unfamiliar landmarks while watching Movies or videos. And, you want to know more about that place, but as you don’t know the name of that landmark, so it becomes a bit tricky. Well Flico is just made to help us get familiar with unfamiliar landmarks and words. 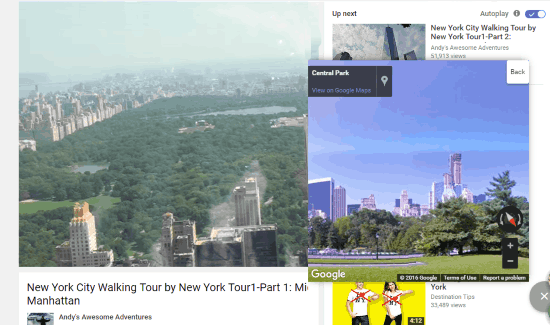 Get Familiar With Unfamiliar landmarks And Words In YouTube Video

Flico aims to help users to know relevant information from any digital media. However for now it only works on YouTube and helps users to get familiar with unfamiliar landmarks and words in a video.

As Flico is a Chrome Extension, so you just need to add it to your Google Chrome browser to get started.  You can either add this chrome extension from the link provided at the bottom or you can just search for Flico in Chrome Web store.

Once added, its icon automatically shows up in toolbar. As you open any  YouTube video, the Flico icon appears in the bottom right corner of the Screen. It has two tools under it, they are Scan landmarks and Scan New Words.

To detect landmarks in the video, you just need to select Scan Landmark. Within a few seconds Flico detects the Landmark and shows relevant information about it in a small popup window. The popup also carries options to see the Map view, Street view, and List of Nearby Restaurants. 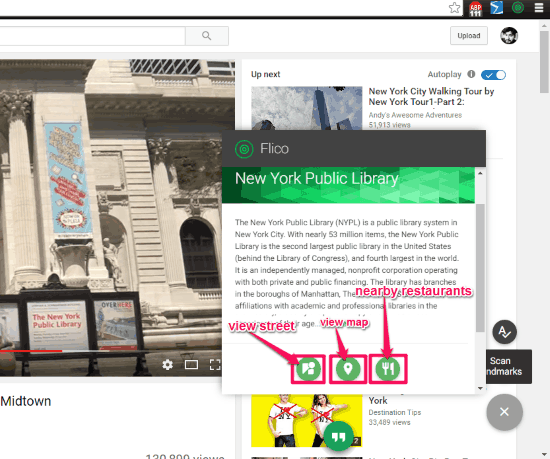 Scan new words option finds all the unfamiliar words and prepares a list of those words along with their meanings.  This list of words also pops in a new small Window. This option only works when the video has subtitles.

Other than Flico, you can also use the following Chrome Extensions to make your video watching experience on YouTube more fun.

Flico is a very resourceful Chrome extension as it helps us to get familiar with unfamiliar landmarks and words while watching YouTube videos. It is so intuitive that I never felt lost while using this Extension. Flico definitely gets my recommendation to all the people who Like to know about different landmarks around the world.