So if you like playing Tower of Hanoi game online without needing to download any software, then you must try these websites.

Brainmetrix.com is a free website to play tower of Hanoi game online. The website basically hosts many games and puzzles to train your brain. The tower of Hanoi game on this website allows you to play the game with up to 7 disks. As you might know, the official solution of the game in terms of number of moves is 2n-1, here n is the total number of disks used in the game.

In order to play the game here, you need to visit the game from the link provided above. Then you need to set the the number of disks and then click on Start the Game Over to play the game. Click on the disk you want to move and then click on the rod you want to place it on. The game also has the option to see the official solution. There is no timer for the game on this website. 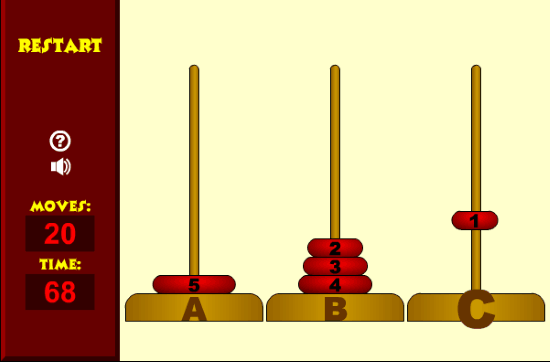 Coolmath-games.com is another website to play tower of Hanoi game. As the name suggests, this website is also meant for cool mathematical games. On this website, you can choose to play the game with maximum 10 disks. The website displays the number of moves and time spent on the game, so that you can easily keep tabs on them. It also has a background sound which you can mute.

On opening the webpage of the game, it first shows you the Instructions and Rules for playing the game. For moving the disks you need to click on the disk you want to move and then click on the rod you want the disk to place in. 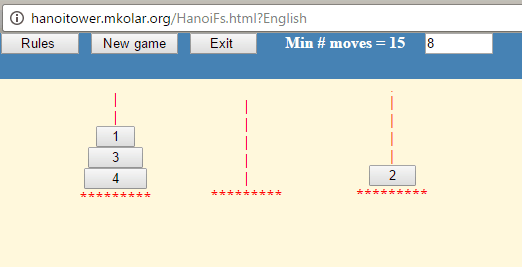 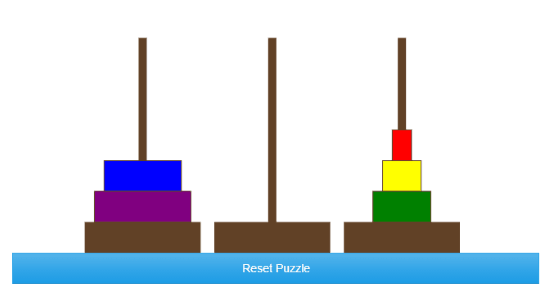 Cheesygames.com is a website meant for puzzle games. The Tower Of Hanoi game on the website comes with an elaborate history of the game. The game however is very simple and it doesn’t come with any timer or solution. It doesn’t even shows the number of moves you have made.

Here, for playing the game you need to drag the disk to move it to another rod. You can only play the game with 5 disks as it is the default number of available disks. 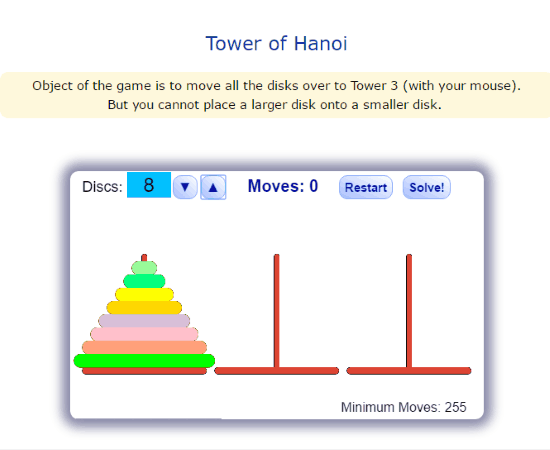 Mathsisfun.com is yet another website that allows you to play Tower of hanoi of game online free. The website is meant for all types of mathematical games based of the branch of mathematics like, Geometry, Algebra, Data, Measure, etc. It allows you to play the game with up to 8 disks. It also shows the official solution according to the number of disks selected. It even shows the minimum number of moves required to solve the game.

For playing the game you only need to set the number of disks first and then you need to drag the disk you want to move.For restarting the game it has Restart option.

All the websites listed here are very intuitive and have simple platforms to play the Tower of Hanoi game online. All the platforms are equally good for playing the game, however, I enjoyed playing the game most on coolmath-games.com as it has the best interface an it also shows the timer, solution and the number of moves you have ma