DeSmuMe is a free Nintendo DS emulator for Linux, Windows and Mac, which you can use in order to open and play games from the Nintendo DS handheld gaming console. This is just an emulator, not actual games, they are gonna have to be downloaded separately. Games are known as ROMs, and they are basically images of the game disk that’s used in actual Nintendo DS. 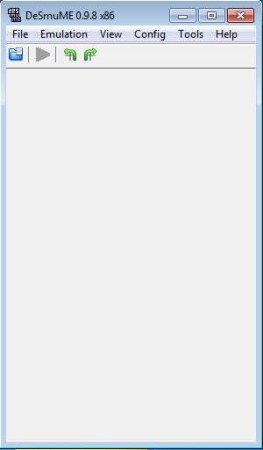 DeSmuMe interface can be seen on the image above. It’s very simple, with a classic menu at the top and few icons for opening ROMs and starting them, these would be the folder and play icon respectively. Large empty area down below is where the Nintendo DS games that you open up are gonna be loaded, where you’ll be able to play them. Note that the games which you open up in this free emulator are made for the Nintendo DS screen, so they can’t look the best quality when opened on large monitors that most of us have these days. Key features of DeSmuMe – free Nintendo DS emulator are:

Nintendo is a very popular gaming console, of which a lot of people have heard of and are familiar with. Nintendo DS is the portable version of it. The latest version of it is even created in 3D, which to some extent DeSmuMe Nintendo DS emulator supports. Be very careful when downloading games, because depending on where you are, some of them, or more likely all of them, will be illegal to download. If on the other hand you have own copies of the game, and would like to play them on your PC or Mac, here’s a few pointers to help your get started.

Before you can play games you should be going over the settings. More precisely you should make sure that the controls that you’re gonna be using are properly set and if they’re not, to change them. 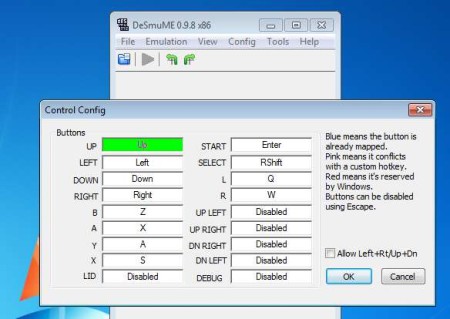 Access them by clicking on the Config >> Controls. Once you’ve done that a window should pop-up where you can go over the controls. Another thing that you need to make sure is that the framerate limit in Config >> Frame Skip is checked, to make sure the game runs at proper speed. Go over other settings if necessary. When you’re done, click on the folder icon, open up your ROM and start the game. 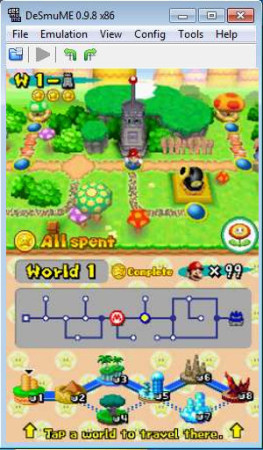 If everything’s properly setup, game should run, you’ll be able to play it and that’s it. In case there’s some problems, no sound, video not right, go over the settings, change them and try again.

DeSmuMe offers a lot of options for the user to tweak, it plays a lot of games, is very fast so if you are looking for a Nintendo DS emulator, you should give DeSmuMe a try.