TLE Analyser is a free satellite tracking software which you can use in order to monitor the orbital trajectories of objects which are currently positioned in Earth’s orbit. Satellites are not the only thing which can be tracked, every object that’s reported by the agencies can be tracked with the help of TLE Analyser in fact it comes with a built-in lists of various different satellites and objects or add your own to track and monitor. 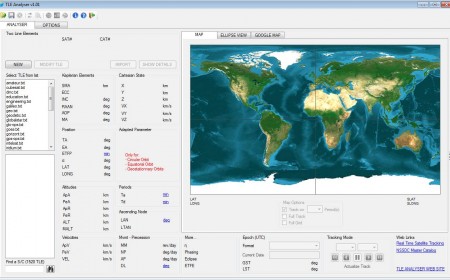 Screenshot above is the default interface that waits for you when you open this satellite tracking software. This application starts working rather large, the window is big and it can be easily changed. At the top you can see a very simple menu and on the left the list of pre-built orbits and objects which are currently in the sky. On the right of it you’re gonna see maps of Earth and also detailed information on the object that you have selected.

Everything that’s detected in Earths orbit is reported by the government agencies so that people are informed about what’s going on in the sky. Below are few tips to help you get started and track satellite orbital positions more easily.

How to Monitor and Keep Track of Satellite Orbits with TLE Analyser?

TLE stands for Two-Line Element which is a data format used to describe the orbits of Earth’s satellites. When using this free orbital position tracker make sure that you are connected to the internet, especially for the Google Earth view. 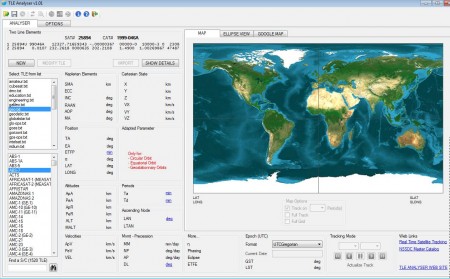 When you select an orbital position from the list on the left, the marking on the map on the right as well as the information next to the map, all these things are gonna change according to the selected satellite or orbital position. Google Earth is also incorporated into and you can switch the maps if you want. 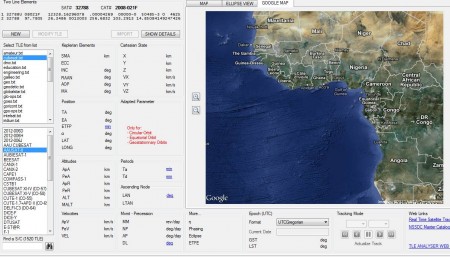 Third view is also available where you can see the elliptical sort of 3D View of the orbital position and the trajectory. If you want to add new satellite or orbital position, click on the New button in the top left corner of the Window.

TLE Analyser is a great tool for all those who are interested in checking the orbital positions of satellites which are positioned in the Earths orbit. Try it and learn something about the Earths orbit. Download this satellite tracking software absolutely free. Don’t forget to check out Geosense, Weather Network App, and MAPSphere reviewed by us.