Geosense for Windows is a free location sensor application for Windows 7, which brings Geo positioning capabilities to Windows 7, similar to what GPS device in cars have. The only difference in  Geosense is that the Geo positioning is gonna be provided by software emulated sensors, which are getting their information from thousands of WiFi networks and hotspots that exist out there, instead of satellites from the Earth’s orbit. 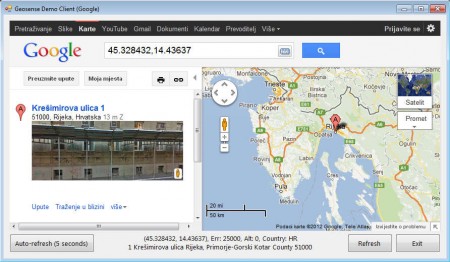 Check out AtomGPS reviewed by us.

What you see in the image above isn’t Geosense, this is the Geosense Demo Client which uses Google Maps to show how Geosense sensors can be used to narrow down a Windows 7 computer’s location even more than what you’d might do if you were using just the classic IP location tracking. Since Geosense uses wireless connections, it would be best that you as well use WiFi when connecting and testing out this free Geo positioning software.

Key Features of Geosense For Windows are:

Geo-tagging is just one of the uses where Geosense can come in handy. For those who do not know what geo-tagging is, it’s when information about your location is added to your online posts and photographs that you take with your digital cameras.

How to Use Geosense For Windows?

Installing Geosense For Windows and activating it isn’t very difficult, because like we already mentioned there’s no actual communication with actual hardware, everything is simulated, so you don’t have to configure anything. After installation, to enable the Geosense location sensor open up Control Panel, select the small icons view, if you don’t have it already, and find the Location and Other Sensors option there. 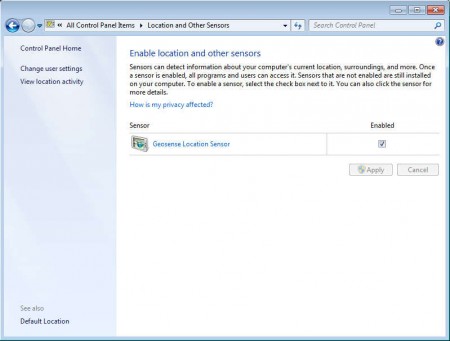 You should see the window which can be seen in the image above. Activating is as simple as putting the check mark in the Enabled column and hitting Apply. Once you’ve done this you can use the Geosense sensors in third-party application, but so far there aren’t any applications which can be used with Geosense. The Google Maps location calculator is just an example from the creators of this free geo positioning utility for Windows 7. 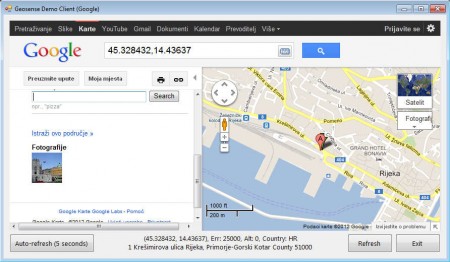 This app too can have it’s uses, for example it can be used as GPS, there’s even an auto refresh option which can reload the map every 5 seconds, so that your locations are up to date.

GPS hardware is expensive, and not everyone can get their hands on it. With the help of Geosense for Windows, you can use your Windows 7 computer  as a GPS.  Make sure that you also try the Google Maps geo location app offered by Geosense, which is very useful for determining your location with the help of your Windows 7 machine, for example your laptop when you are on the run. Download it free.

Update: Due to similar features now present in Windows, Geosense for Windows has been discontinued.