Atom GPS is a free automatic geotagging application which is gonna automatically add geotaggs to your photos by using information about your whereabouts from your GPS log files. Geotagging is the practice of adding location information of where an image was taken to the image EXIF metadata, which would be a part of the image where information like time and date of creation is stored. With geotagging images can be viewed and sorted based on the location where they were taken, which can at times be very useful. 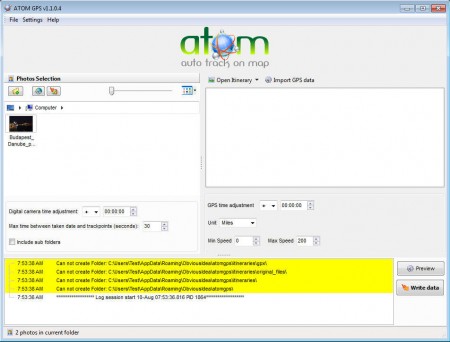 To use Atom GPS you’re gonna have to have a GPS device, a camera, obviously, and a computer to which you’ll be able to connect them both. All the major GPS devices are supported, their log file types are supported, and a lot of the cameras are also supported, the RAW camera format which means that you don’t have to process photos before using them inside Atom GPS. Next to being able to add geotaggs to photos, Atom GPS can also:

Geotagging usually takes a long time, because you have to do it manually for each photos, look at it, figure out where it was taken and then write in the correct geotag information. Now with Atom GPS you can easily tag entire collections at once.

How to automatically geotagg photos with Atom GPS

After you’ve come back from the trip where you’ve made photos with your camera, take your GPS device and connect it to the computer. Search for travel logs, where all of the information about where you were is gonna be stored, with time stamps, make sure that your clock is set correctly, on both your camera and your GPS. After you’ve finished with the GPS do the same with camera, only with the camera we’re extracting images. Next open up Atom and load both images and logs into the program: 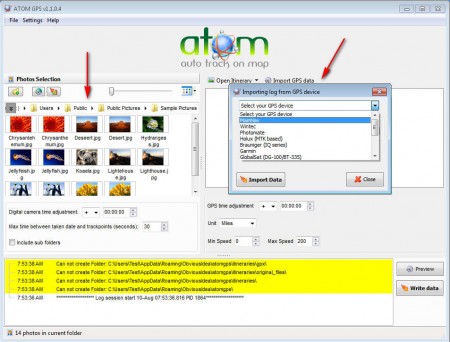 On the left side you need to open up the image collections to which you want to add geotags, and on the right open up the GPS logs. When you’ve done that, all that’s left to do is to click on the Write data button. By comparing time stamps on both images and GPS logs, Atom can figure out where you’ve been when a certain photo was taken, and it will simply add the location written inside the GPS logs to the photo metadata.

Like we already mentioned manually adding geotags can be very tiring, but with Atom GPS all that’s in the past. If you decide to create automatic geotags with Atom, make sure that you check if your GPS device is supported, majority of them are, but it doesn’t hurt to check and be sure. Perhaps the best feature of Atom would be the fact that it’s free, so if your looking for an automatic photo geotagger, Atom is the thing you need.