Here’s a list of 5 MD5 hash checker software for Windows 10 which you can use to check the MD5 hash numbers of files on Windows 10 powered devices. Downloading files from the internet isn’t very safe, and checking MD5 checksums is a great way how to make sure that the files you’ve downloaded are original files released by the author, that they were not tampered with by third parties and injected viruses or other types of malware. Think of MD5 hashes like file fingerprints.

Following applications will help you calculate and even automatically compare MD5 file hash with the original MD5 hash released by the author of the file in question. 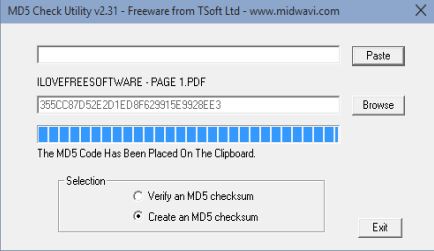 MD5 Checker by TSoft is a portable MD5 hash checker software for Windows 10 which lets you generate MD5 hash values of files and also check them against the original MD5 hash values posted by the file author.

First make a selection down below what exactly you’d like to do. Verify the MD5 checksum or just create a MD5 checksum. When verifying, you’ll need to paste the MD5 hash released by the author so that the application has something to compare the calculated MD5 checksum. Use the Browse button to load the file into the application.

Get MD5 Checker by TSoft. 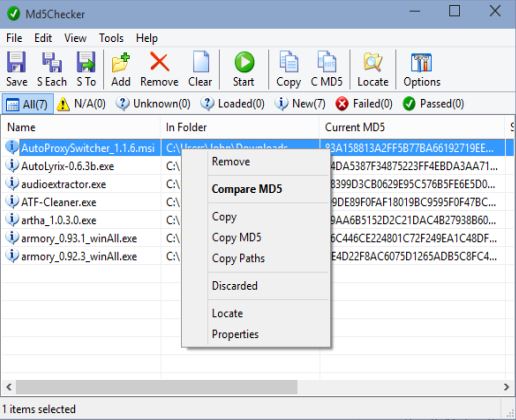 Md5Checker is another portable MD5 hash checker software, only it’s much more advanced than MD5 Checker by TSoft.

It lets you load up and generate the MD5 checksums of multiple files at once. Use the “Add” button from the top toolbar to load up files onto the list down below. Md5Checker will even detect .md5 files if they exist in the same folder, which helps with the verification process. If .md5 files are not there, you’ll have to right click and select the Compare (same as verify) option to load up the MD5 checksum given by author and confirm the authenticity of the files in question.

Also, have a look at MD5 Hash Generator To Get MD5 Value of File, Compare with Another File. 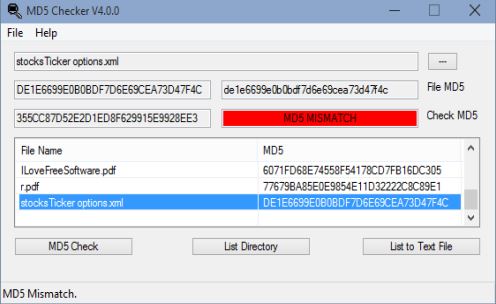 Interface isn’t as advanced, but it still lets you load up multiples files (by selecting folders) and generate MD5 checksums for all of them. It also automatically detects the checksum inside the clipboard after you click on the “Check MD5” button. If the checksum doesn’t match with the generated checksum, you’ll get an error like the one on the image above.

Get MD5 Checker by George Jopling. 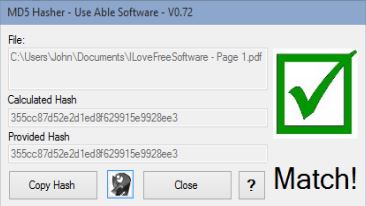 MD5 Hasher is a throwback to simplistic MD5 hasher software from the beginning of this list. It’s portable, and the first thing that you’ll see after running the application is a “Open file” dialog box where you need to select the file whose MD5 hash you want to generate.

Individual files can only be checked, and you can paste the original MD5 hash given by the file author to compare it with the one generated by MD5 Hasher. Depending on authenticity you’ll either see a giant green check mark or a red X, where the giant red X indicates a MD5 checksum mismatch.

Also, have a look at Free software to get MD5 hash value of files: MD5 Hash Viewer. 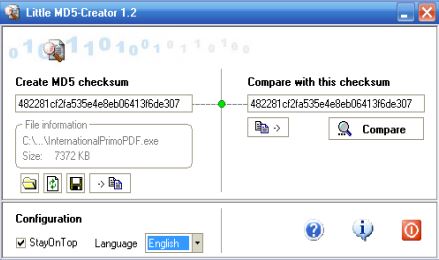 On the left you need to load the original file, while on the right you’re asked for the confirmation checksum that’s usually given by author next to download links. Green means they’re a match, red means that something fishy is going on.

Md5Checker and Little MD5-Creator are my favorites. First one because it has a lot of useful options with a professional looking interface. Little MD5-Creator is simpler, but still gets the job done. Let me know what you think in comments down below.