Here’s a list of 3 app manager extensions for Chrome which you can use to manage and take control of apps that you have added to your Chrome web browser. Sometimes we overdo it when installing apps into Chrome and end up with having hundreds of them installed. Managing such large number of apps can be annoying and time consuming. If you would like to know if there is a way to make things easier on you, then have a look at the app manager extensions from the list down below. They make it easier to group, delete, disable/enable the apps to your liking.

I use these on a regular basis, seeing how I go through a lot of installations during testing. 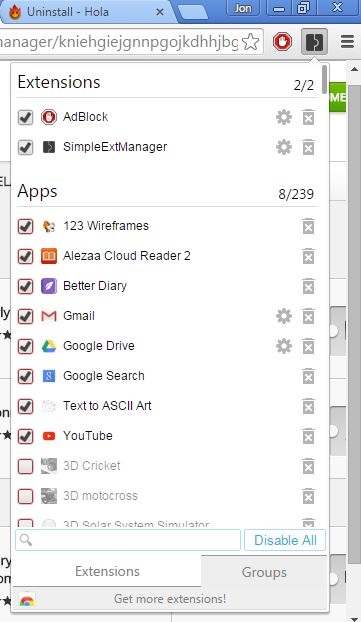 I came across Extensions Manager recently when looking for a tool that can help me manage extensions, but I noticed that it’s also an app manager. It actually supports all three types of Chrome add-ons, apps and themes included.

Access it easily from the top right corner of the screen. It lists first the extensions that you have installed, followed by apps and then themes. Extensions, apps and themes can be grouped and easily deleted by clicking on the trash can icon on the right. Extensions can also be disabled all at once by clicking on the “Disable All” button in the bottom right corner of the screen.

Get Extensions Manager (aka Switcher).

Also, have a look at 5 Tab Manager Extensions For Chrome. 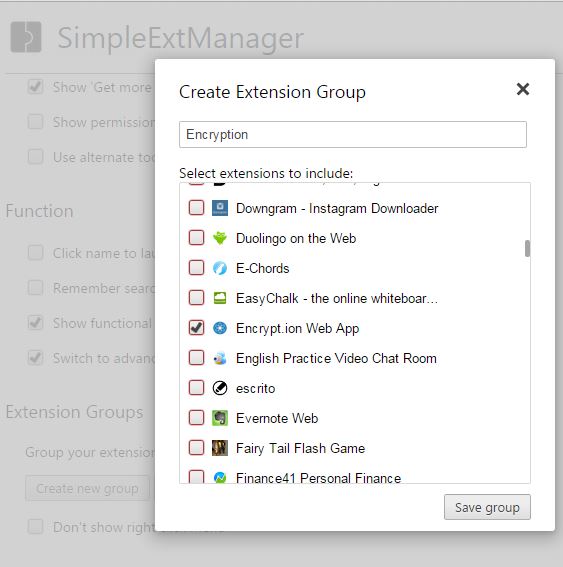 SimpleExtManager is very similar to the previously mentioned Extensions Manager. It again can’t be solely lumped into app manager extensions because it also lets you manage extensions and themes, not just apps.

On the image above I’m sending apps into a special group so that they are more easily managed based on type. Search lets you find apps, themes and extensions. Once they are found they can then be deactivated, deleted or placed into more easily managed groups. Unwanted apps can be easily removed from the overview list by clicking on the deleted button. 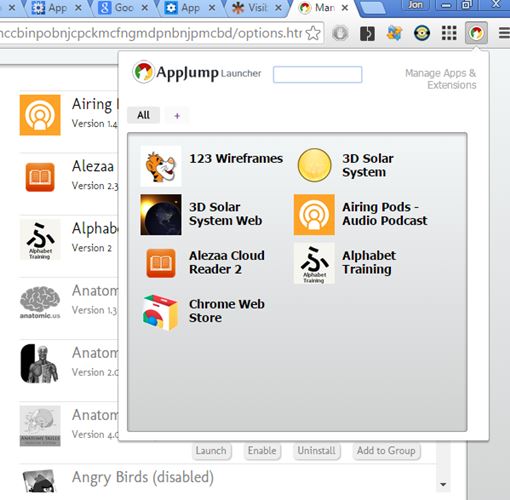 What you need to focus in on with AppJump App Launcher and Organizer is the second part of its name, the “organizer” bit.

This is an actual app manager extension, one that completely focuses on letting you manage apps. It does this very similarly to the previously mentioned app manager extensions, only as a bonus you also get a launcher that can be accessed from the top right corner. Open up extension settings to choose which apps are going to be showed in the launcher (by disabling/enabling them), group apps and uninstall the ones you don’t need.

Get AppJump App Launcher and Organizer.

AppJump App Launcher and Organizer is very useful, not just as an app manager, but also as a very useful app launcher that allows you to quickly launch apps. Other two app manager extensions are also quite handy, but they lack the app launcher. Let me know what you think, which app manager you use by leaving a comment down below.