Mz Game Accelerator is a free PC optimization utility specifically designed to help you speed up your PC just before you start playing games so that you get better in-game performance. This free game optimizer will scan your computer and look for any unnecessary system services that you may have been running in the background and stop them. Memory optimization is also available, among several other things that are gonna help boost PC game performance. 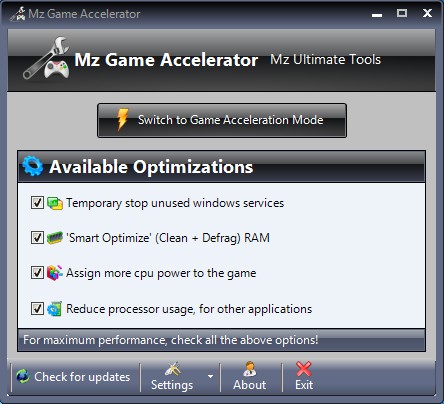 The four system areas that can be optimized by Mz Game Accelerator can be seen listed in the middle of the screenshot above. You can select which one of them are gonna be used during the optimization by removing the check marks next to them. Giant Switch to Game Acceleration Mode button is available just below the header at the top. At the bottom settings button is available where you can change theme, language or how this free game performance booster will start, minimized to system tray, on windows startup and so on. Key features of Mz Game Accelerator are:

Games are always moving forward, and it can be difficult at times to keep up when it comes to hardware. The fact that Windows has the tendency to become bloated and slow down over time also isn’t helping if you’re interested in having good performance during gameplay. Mz Game Accelerator can help you by trimming down the resources used by all the other applications and giving more of them to the games that you play, here’s how. 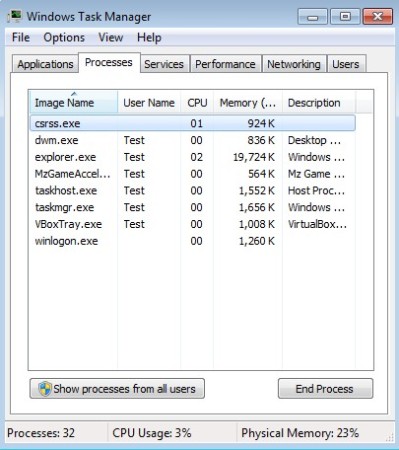 Screenshot above show us what our resource usage looked like before optimization with Mz Game Accelerator. Some minimal processor activity can be seen and around 23% of memory has been taken up. 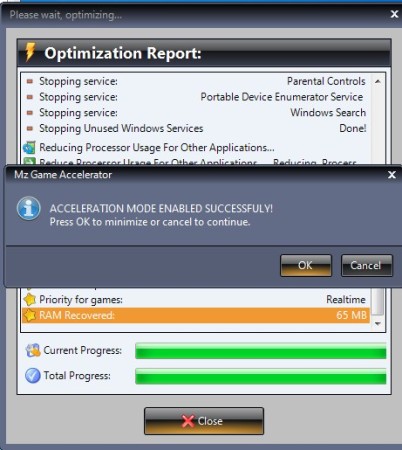 We left all of the 4 system optimization tweaks activated and turn on the Accelerator Mode. Now this is a relatively well maintained installation, so resource wastage isn’t that high, but as you can see: 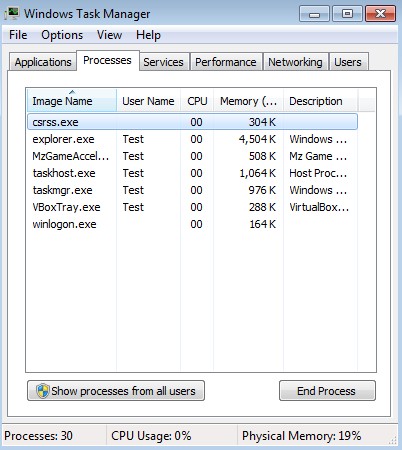 After we started Mz Game Accelerator we noticed almost a 5% drop in memory usage, and processor activity also dropped significantly. 5% might not seem that much, but remember that this is a 2GB machine, so it’s actually 100MB of RAM that was released. This is also a relatively well maintained system, so you’re probably gonna see much better results.

Gamers who have problems with game performance and would like to squeeze every drop of power from their hardware, without going into over-clocking, which is not what Mz Game Accelerator does. This is just a software accelerator that optimizes your system for gaming. Free download.