Wise Memory Optimizer is, like the name of the application suggests it, a free portable memory optimization software for Windows which you can use in order to free up memory used by closed process. Sometimes when you close an application it closes without actually releasing RAM that it has been using leaving the system to think that the memory which has been in use is not free. With Wise Memory Optimizer you can fix this in just one click. 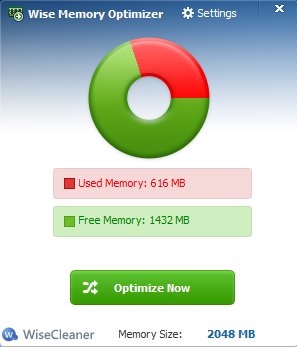 Just the default interface without having the additional settings open is very simple. Only other button that’s available for you to click on is the Optimize Now button down in the middle which starts the memory optimization process.

Manually adjustable amount of memory that you can set to be freed up is of course not the amount that’s actually gonna be freed. You can set for example 1GB but the entire amount will not be released. It depends on how much memory is actually unnecessarily taken up by zombie processes.

How to optimize memory with free portable memory optimization software:

By clicking on the Settings button in the top right corner you’ll open up additional memory optimization settings that are offered by Wise Memory Optimizer. 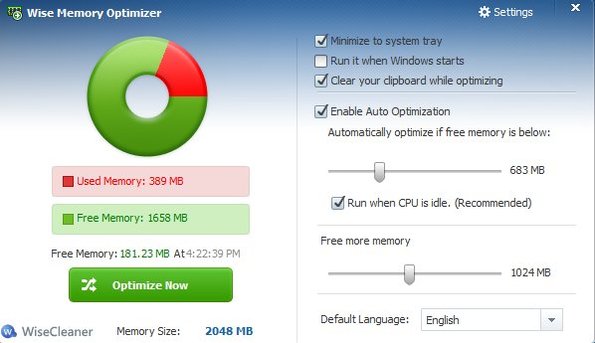 Settings are extended to the right. The most interesting setting that you can change there is the Enable Auto Optimization option which lets you set a minimum amount of memory at which, if total amount of memory goes below it, Wise Memory Optimizer will kick in automatic optimization to free up memory. 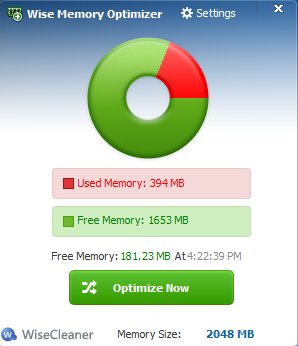 Manual optimization is of course also possible. Just click on the Optimize Now button to start it. Like you can see we feed up almost 200MB of memory.

Wise Memory Optimizer should be used by all those who notice that their system starts to get slow as they’re using it for a longer period time. It’s very easy to setup this free portable memory optimization software, instead of having to restart your computer to get back that fresh boot speed. With automation you don’t even have to get your hands dirty. Just turn on the automatic optimization and set the amount of free memory at which optimization should kick in.