MapleXP is an advanced work time logger that lets you record time that you spent on various tasks. It lets you organize tasks in a hierarchical order, so that each task can has as many sub-tasks as you want. To record time spent on a task, you just select that task from MapleXP task explorer, and click on “Start”. MapleXP will start recording time on that task. When you are done, you can click on “Stop”, and MapleXP will record both start as well as end time, and total time spent on the task.

MapleXP also lets you add comments to an activity just completed. For example, you might be a freelancer writer, and just finished writing an article. In comments, you can note exact article name so that you know what was the purpose of that activity. 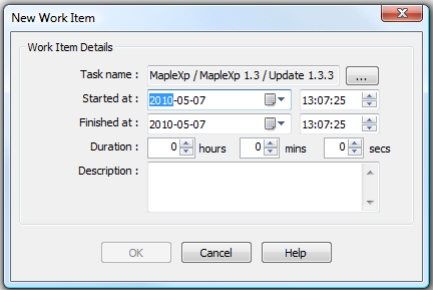 Now, we have already reviewed many time logging software (like ManicTime, and ClockingIT), with some that can record time automatically. What makes MapleXP advanced are the configuration and personalization options that it provides. Unlike other time logging software, MapleXP records your time in SQL Server CE database. This also means that you need to have a SQL CE installed on your computer (it is completely free).

You can choose to create multiple databases if you want to separately track times of your office or work activities. Or, you might simply want to create a different database for each project that you are working on, though that might be better utilized by creating tasks and sub-tasks.

Apart from that, you can also create a separate database for each user on the computer, in case the computer is shared among multiple users. This ensures that each user can record their time separately. Other time recording software is Ganttic.

Another advanced feature of MapleXP time logger is that immediately records start time or end time of the activity when you do the action. For example, when you start a task, MapleXP will immediately write that to database. So, in case your computer crashes before ending the event, MapleXP would still have recorded the start time of the event, and you can manually add end time for that.

MapleXP might not be the most feature rich time logging freeware, but it definitely has some unique advantages. If you are looking for a simpler time logging software, you can choose from one of the links earlier provided. If you want more customization, MapleXP is a good choice.

You can download MapleXP here, and check its documentation here.