Here are 3 free Twitter auto liker bots to favorite tweets based on a hashtag. These Twitter automation tools can search for tweets having a hashtag, set by you. After that, they will automatically favorite those tweets. And some of them can also do other tasks as well such as auto re-tweeting and auto follow the users. These bots are written in Python and JavaScript(Node) and runs directly from the command line. Also, if you have some knowledge of Heroku, then you can easily set up some of them with just one click. And if you are a good programmer, then you can also enhance the functionality of these Twitter automation tools.

These Twitter auto liker bots connect to the Twitter API and then they start the automation task. In the following article, I will talk about 3 such tools that you can use. Using these bots, you can speed up your work and save a lot of your time that you would have wasted if you like the tweets on Twitter manually. All of these Twitter bots or automation tools are open source and you are free to modify them according to your needs. 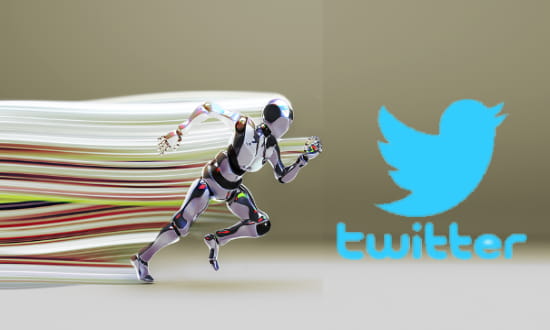 3 Free Twitter Auto Liker Bots to Favorite Tweets Based on a Hashtag:

Before I start explaining these tools, there is one thing that I have to tell you. In all of these Twitter bots, you will need twitter API’s credentials. You will need those to authorize yourself and to make these bots work. You will have to create an app on Twitter and then Twitter will give you 4 unique credentials namely, API Key, API Secret, Access Token, and Access Token Secret. These 4 parameters are essential and specific too.

To generate API credentials, you can see this article. And while creating your app, don’t forget to give it Read and Write permissions. And after you have the API credentials you can use any of the following Twitter automation tool to start favoriting tweets automatically.

tw-fav is a simple Twitter auto liker bot in Python. It is a simple script that you can run in your terminal or command prompt to auto favorite tweets on Twitter. You can specify a desired hashtag to search tweets and mark them as favorite. You can also define how many tweets you want to favorite using this script. There is just a bit of configuration you have to do and then you can easily start using it.

Here are the steps the to use tw-fav to automatically favorite tweets based on a hashtag.

Step 1: Download the tw-fav.py from this link and make sure that Python is installed on your PC.

Step 2: Fill up the Twitter API credentials (from line 12 to 15) and then specify the hashtag you want to search for. Also, you can specify the result type and number of tweets to favorite. You can make edits at line 24 of the script and save changes. 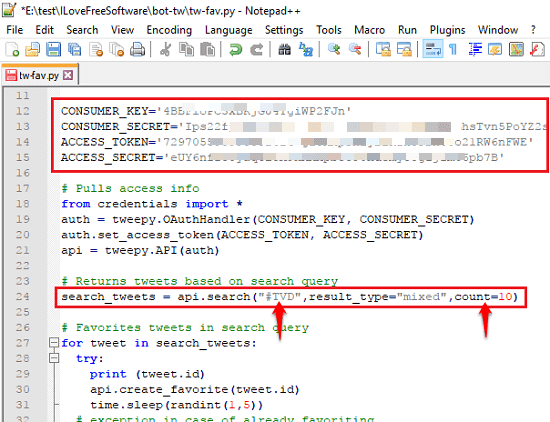 Step 3: Open the command prompt in the same folder and then you can run this script. Type the following command and it will start its work. 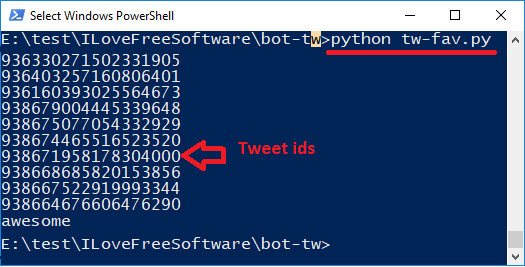 After running the above command, this script will collect the tweets, matching the specified criteria. It will keep marking them as favorite. And in the command prompt, you will be able to see the ids of the tweet that it has marked as your favorite.

Twitter-drone is quite an advanced Twitter bot on my list which has some intelligence in it. It can easily mark tweets as favorites which match the specified criteria. And not only that, apart from marking tweets as a favorite, it can also re-tweet them and follow the users of those tweets. And the best part about this bot is that you can use it to only favorite, only re-tweet or only follow users of popular tweets. Just like the other tools that I have mentioned here, you will have to do a bit of configuration to make it work.

Step 1: Grab the ZIP file of the Twitter-drone repository from here. After that, extract it to some folder of your choice.

Step 2: Create a file “.env” in the main folder of Twitter-drone where the “index.js” file is available. And in the “.env” file enter the Twitter API credentials as shown in the following screenshot. Replace XXXX with the API keys that you have and after that save changes in the file.

Step 3: Now, install the dependencies for the bot by running the “npm install” command. 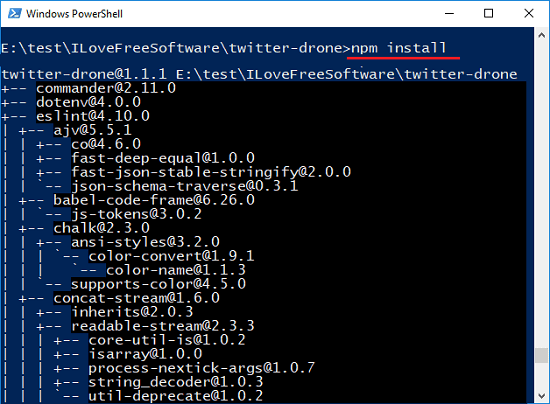 Step 4: Finally, to run the bot for automatically marking tweets based on hashtag, run this command in the specified format. 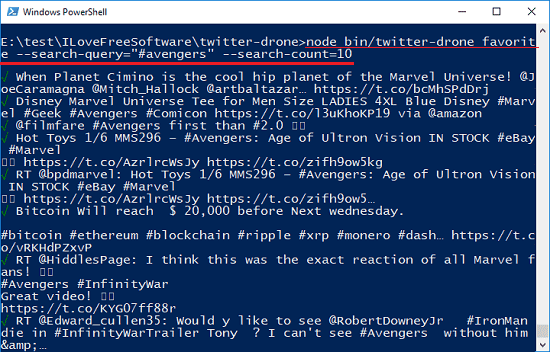 After running this command it will gather the tweets which have the specified hashtag. And it will mark them favorite. In the command, you can replace “#avengers” with any other search term you like.

Twitter-bot is another free bot that you can use to auto favorite tweets on Twitter. And not only tweets, but it can also automatically re-tweet the tweets matching the search query and follow the corresponding users. This bot is written in Node.js and you just have to make some edits in the configuration file in order to make this tool work. This tool works at quite fast speed and surely it will help you save a lot of time.

These steps will help you get started with this Twitter bot to auto favorite tweets.

Step 1: Grab the ZIP file of the repository from here. After that, you can extract that to any location on your PC.

Step 2: Open the “config.js” file with any text editor and fill out the Twitter API keys and tokens (line 7 to 10).

Step 3: Now, open the “app.js” file and from the “params” section, specify the search query, locale, number of tweets to favorite and some others. Finally, save the changes to both files and in the main directory open a command prompt there. 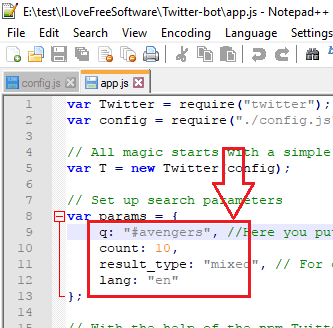 Step 4: First, install the dependencies for the bot and for that, run this command. 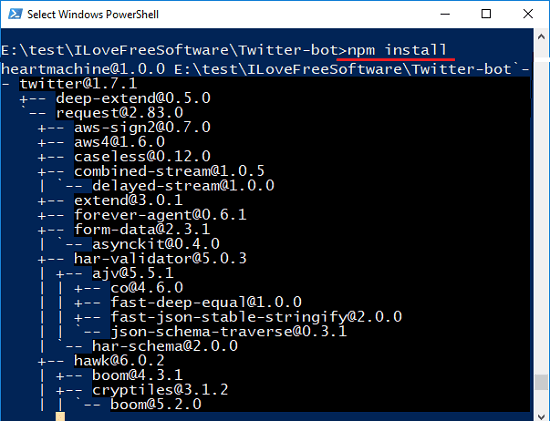 After all the dependencies have installed successfully, you can run the bot. To run the bot, type the following command in command prompt and hit enter. 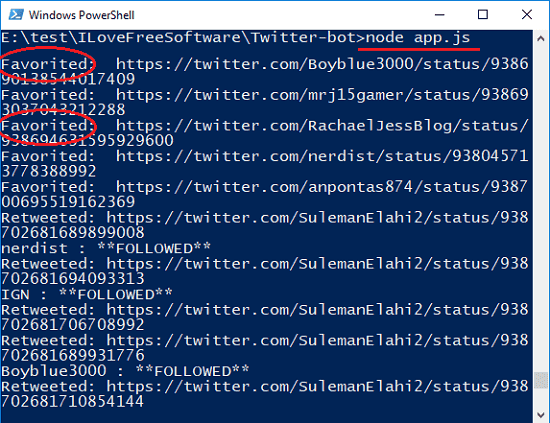 The bot will start looking for the tweets and will add them as your favorite. You can see the output on the command prompt where it shows the task it has done and the URL of the tweet.

These are some of the best free Twitter auto liker bots to favorite tweets based on hashtag. Even if you don’t have much programming knowledge, still you will be easily able to configure and use these tools. These Twitter bots work amazingly and can greatly save a lot of your time by their automation capability. So, if you are looking for some free twitter bots to automate re-tweets and marking tweets as favorites, then this article will come in handy.