Lockwatch Anti-Theft is a free app for Android that allows you to secure your Android device with just a few clicks. What this app does it that when someone enters the wrong unlock code or unlock pattern and tries to unlock your device, this app automatically takes a picture using your Android device’s front camera, and emails the image along with the location that the wrong code was entered to the email id that you have set up inside the app. At a first glance, this may seem pretty useless, but if you think over it, this is actually extremely useful! If you happen to lose your phone and someone tries to unlock your device, you will be sent an image of the person who may have “stolen” your device, and you can file a complain in your local police station against this very person! Pretty neat, right?

P.S. You should have a lockscreen security set up on your Android device for this app to work. Pattern and pin security, both will work.

Lockwatch Anti-Theft is available for free from the Google Play Store.

When you have installed the app and you launch it, you will be presented with an interface which looks like the below screenshot. 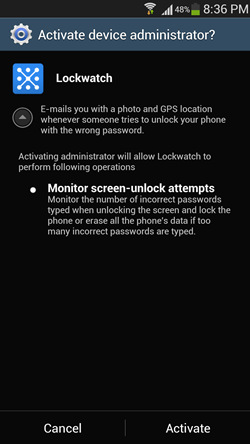 Here, the app asks you for Administrator privileges. Just click Activate at the bottom right corner of the screen. Now, you should be presented with a screen which looks like the below screenshot. 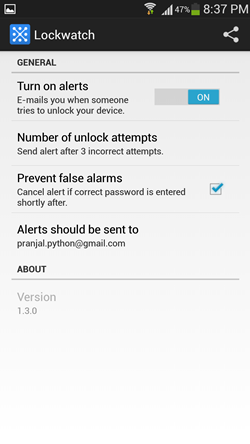 Here, you can configure various settings like turning alerts on or off, setting the email id to which you wish to send your alerts, number of unlock attempts after which the picture should be taken and sent to your Email id, and whether or not you want to prevent false alarms. Once you have configured your settings, you can simply close the app. Now, let me go ahead and enter the wrong unlock pattern for 3 times (as my setting is on 3 times wrong unlock pattern after which mail will be sent) to see what happens. Unfortunately, my device does not allow me to take a screenshot of my lock screen, so just believe me when I say that I entered the pattern on my device 3 times incorrectly. 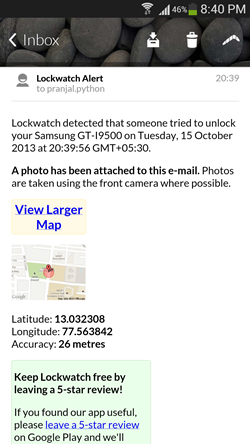 Upon checking my inbox after entering the wrong lock screen pattern for three times, I was absolutely amazed at the mail I received. Not only did the app send me an attached image of who entered the wrong pattern, but I was also able to see the location (accurate to 26 metres) where the wrong pattern was entered! Pretty neat, right?

And here’s the image that was attached (of course, that’s me :P ) 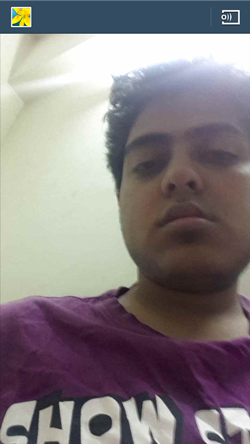 Alright, I look bad! But hey, that’s what you look like when you aren’t ready for a photo, right? Oh and before I forget to tell you, the app silently takes this photo, i.e., you don’t hear any camera sound when the image is taken and mailed.

As an extra layer of security, this app is perfect for all Android devices! You can also check out the App Lock app to lock your Android apps.

Lockwatch Anti-Theft is an amazing app that allows you to secure your Android device in a way such that even if you happen to lose it, you can have a good idea of who might have your device. Of course, the app is only useful if you have a lockscreen security set up, else it is as good as useless.

This is definitely an app all Android users should have, as nobody wants to lose their phone.

TIP: If you have an expensive phone, it is always better to get it insured in case you lose it.

Get Lockwatch Anti-Theft for Android.