Fedora Games Spin is a distro of Fedora that has more than 100 best Linux games to play with. Download the Fedora Games Spin Linux Operating System, put it on a USB drive, and start playing. You don’t even need to install it!

Fedora Games Spin is an alternate version of Fedora designed specifically for gaming and other customizations are also included. So, Fedora Games Spin has more than 100 Linux Games but every game available on Fedora is not included. Download size is 4 GB. If you like it then install it on your hard drive or else just use it virtually from your Flash Drive whenever you want to play games. 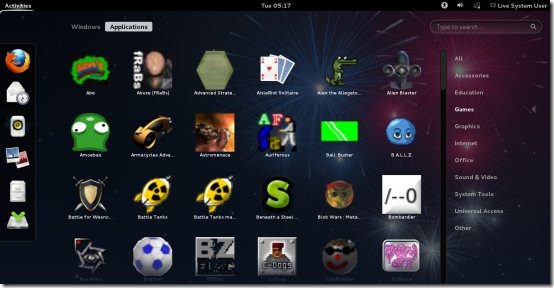 Fedora Games Spin has more than 100 interesting Linux games embedded in to it. Most of the games are also available for Windows and Mac to download. But this Spin distro is specially designed for best open source games of all genres. It may not have all the games that Fedora can offer but it will definitely give a nice experience of Linux Gaming.

Fedora can be installed as a main operating system or as a dual operating system on your PC. You can also use Fedora Games Spin from a Pen Drive to try it out. Be sure to check your system requirements and go ahead with the installation process. Just click here to Read The Documentation on Installation Guide.

Abe: Abe is a side scrolling, exploring game where Abe is on a journey to explore the ancient pyramid. Just escape the deadly creatures and collect the gems, health, and keys to unlock the doors.

Abuse: Abuse is a side scrolling dark game. Just kill those nasty aliens and make your way through.

Alex the Allegator: This is also a side scrolling game which reminded me of Mario Forever. Only difference is the Alligator (Alex) can eat the creatures in the game while Mario can just kill them. 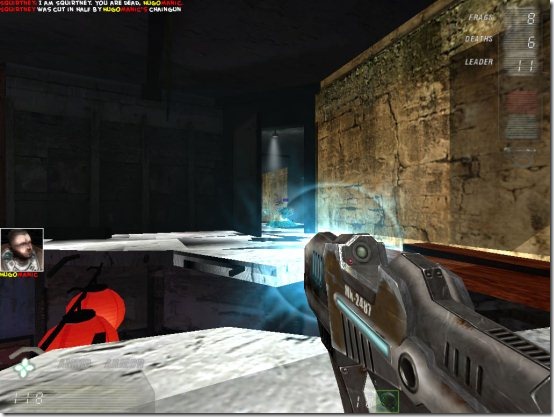 Alien Blaster: Alien blaster is a 2D Game where your duty is to stop the invasion of Aliens.

Amoebax: Amoebax is an addictive puzzle game where you have to stop the Amoeba from multiplying their population.

Armacycles AD: This game is based on the movie Tron. You can read a detailed review on the game here. 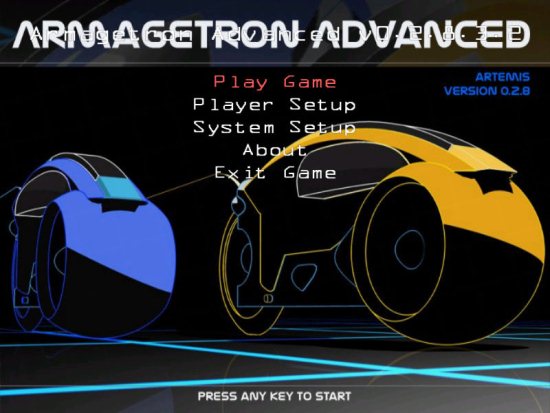 Astromenace: Astromenace is a 3D shooter game where you are on a mission to protect your homeland from creatures of outer universe. 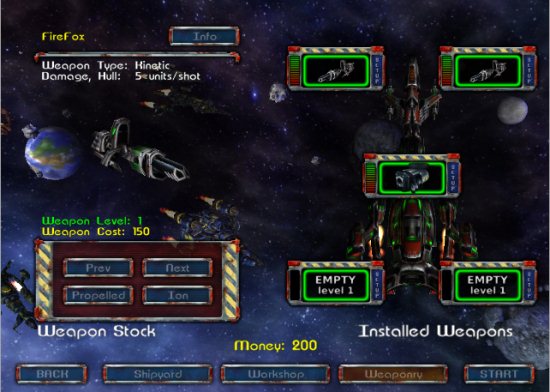 Auriferous: Auriferous is a game similar to the classic game Lode Runner. Collect the loads and escape the enemies.

Ball Buster: This is a brick breaking game. Make the ball bounce into the arena to break the bricks.

Beneath a Steel Sky: This is a 2D Sci-fi adventure game.

Blob Wars: This is a 2D platform shooting game.

Bombardier: This is a GNU game; featuring the bombing utility.

BZ Flag: This is a 3D multiplayer tank game.

Celestia: This is an open source application where you can visualize space. This is specially a space simulator.

Child’s Play: This is a collection of games designed for young kids.

Clan Bomber: In Clan Bomber you have to plant bombs and kill the enemies.

Colossus: Colossus allows people to play against each other or the computer.

Crack Attack: This is a simple puzzle game.

Critical Mass: This is an open source space shooting game.

Crossfire: This is a online client. This is used to find crossfire game servers.

Crystal Stacker: This is a falling blocks game. Match the same color crystals to win the game.

Dodgin’ Diamond 2: This is a arcade shooting game.

Duel 3: Fight with spaceships on a 2D platform in this space game.

EgoBoo: EgoBoo is a 3D top down shooting action game.

Enigma: This is similar to the ATARI game.

Escape: This is a puzzle game; push blocks and arrange them to win the game.

Extreme Tux Racer: This is a 3D sliding game with Tux the penguin.

Flight Gear: This is a 3D flight simulator game.

Flight Of Amazon Queen: This is an adventure game.

FooBilliard: This is an open source billiards game.

FreeCiv: This is a multiplayer strategy game; where you have to build an empire and defend it.

FreeCol: This is a turn based multiplayer strategy war game.

FreeDoom: This is a FPS game similar to Doom.

Freedroid RPG: Freedroid is a game in which Tux the penguin is the hero.

Frozen Bubble: This is an arcade game that may be played as a single player or multiplayer over a network.

gCompris: This game is designed for kids to develop their aptitude.

Gem Drop: This is a falling blocks puzzle game.

GL-117: This is a simulation game based on flights.

Glob 2: This is a real time strategy game.

GNUBG: This is a backgammon board game.

GNUGo: This is a game based on text.

Haxima: This is a full featured role playing game.

Hedge Wars: This a 2D game where hedgehogs throw bombs at each other. You have to adjust the speed and angle depending on the position and wind conditions

KoboDeluxe: This is a 2D side scrolling shooting game.

Lacewing: This is an arcade shooting game.

LBrickbuster: This is a brick buster game. You have to blast the bricks to win the game.

LinCity: In this game you can build a city of your own.

LiquidWar: This is a multiplayer war game. Create armies with liquid and destroy the enemies.

Lmarbles: This game is an Atomix clone; where you have to create shapes with marbles.

London Law: This is an online multiplayer game. This is a remake of a detective game.

Lure of the Temptress: This is an adventure game.

Maelstrom: Maelstrom is a game based on space shooting.

Magicor: Arrange the ice blocks so that they can extinguish the fire and win the game.

ManaWorld: This is a 2D MMO game.

Mania Drive: This is a 3D driving game where you have to do stunts to win the game

Mirror Magic: This is a logic game where you have to reflect light to an end point to win the game.

Net Hack (Vulture’s Eye and Vulture’s Claw): This is an other version of Net Hack game.

Neverball: Just make the ball pass through the obstacles and win the game.

nJam: This is a maze game. You have to catch all the cookies before the bad guys kill you.

No Gravity: No Gravity is a 3D space shooting game.

Emilia Pinball: A remake of famous Windows Pinball game with a Penguin theme.

Pingus: Pingus is a famous Penguin game. You have to make the penguins reach the home safely without falling off the cliff.

Pioneers: This is a turn based strategy game about colonization.

Pipe Night Dreams: Connect the water pipes to create a pipeline against time to win the game.

Pipe Panic: Pipe Panic is a pipe game where you have to connect the pipes against time.

Planets: This is a space simulator game for exploring space.

Poker 2D: Through Poker 2D you can play poker online with others.

PyChess: This is a Linux based Chess game

PySolFC: This is an all in one collection of solitaire kind of games.

Quarry: This is a combination of board game where you can play against computer or other humans.

Raid ’em: This is a 2D shooting game.

Ri-Li: This is an arcade driving game.

Rogue: This is an adventure graphic game.

Scorched 3D: This is a 3D Turn Based Game. Read a detailed review on Scorched 3D here.

Scorch Went Bonkers: This game is an alternate version of Scorched 3D in a different way.

Seahorse Adventures: In this game you have to make the seahorse pass through various obstacles to land on moon.

Shippy: This is an alternate version of Space invaders or Galaxians game.

Sopwith: This is a classic Sopwith game made to run on latest Operating Systems.

Stellarium: This is a realistic night sky renderer.

Stormbaan Coureur: This is a simulation game for vehicles.

Super Methane Brothers: This is a 2D platform game.

SuperTux: This is a side scrolling jump and run game.

SuperTux Kart: This is a 3D racing game.

Taxi Pilot: Taxi Pilot is a game in which you drive a Taxi; that too in space.

Tracballs: In Tracballs you have to make the ball move through the labyrinth.

Tremulous: Tremulous is a FPS game.

TuxPaint: This is a paint program developed for kids.

Ultimate Stunts: This game is based upon the game Stunts.

Vodovod: A funny pipe game where you have to guide your water supply to the ground level.

Wesnoth: Battle for Wesnoth is a strategy war game where you take turns to kill the enemy. Read a detailed review on this game here. 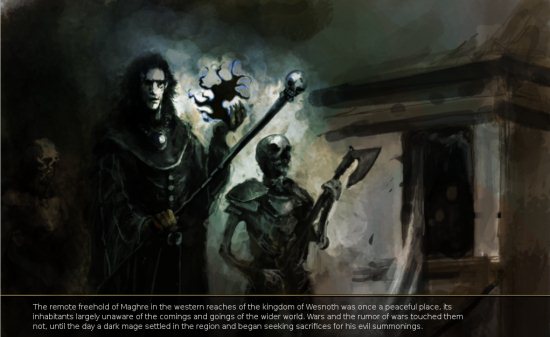 Widelands: This is an open source strategy game.

xBlast: In this game you have to plant bombs and kill the enemies.

XGalaxy: This is an arcade game where you have to kill the enemy ships before they attack your planet.

X-Moto: X-Moto is a challenging 2D game on a motocross platform.

There are more Linux games, educational software, applications and much more in this Fedora Games Spin distro. You can also use this Linux OS for other general purposes.