Here’s a list of 3 hash calculator extensions for Chrome which can be used to quickly and on the fly calculate hash values of text strings and files. Some of the extensions that I covered support hash calculations using multiple methods like MD5, MD1, SHA-1, SHA-256, RIPEMD-160, Whirpool and more. Finding out hash signatures of files is an important confirmation method that you downloaded unaltered files, those that are published by the original author. Let’s see how exactly it is that these extensions work.

Hasher is a text string hash calculator extension for Chrome that supports a long list of hashing methods, as you can see from the image down below. 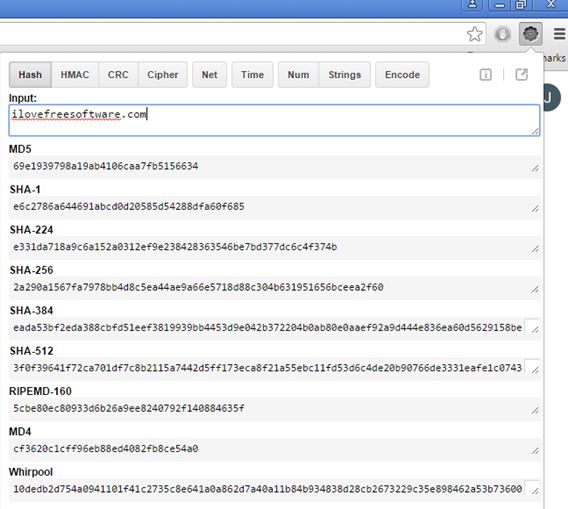 Multiple versions of SHA, MD and also RIPEMD-160, Whirpool hashing is supported. Left click on the top right corner icon and a drop down window will appear. First tab is the “Hash” tab. Type in the text string that you want to see hashed and values are going to be automatically calculated down below. Other features include CRC calculator, time converter, IP address analyzer and more. Switch to these other tools by clicking on their tab at the top of the drop down window.

Toolsley Hash & Validate is a file hash calculator extension for Chrome, which calculates hash signatures of files. At first I thought that the app would need to somehow upload the files online in order to perform calculations, but everything is actually calculated offline with the help of Javascript, which is nice. Uploading larger files to a server would take a long time, especially on a slower connection. 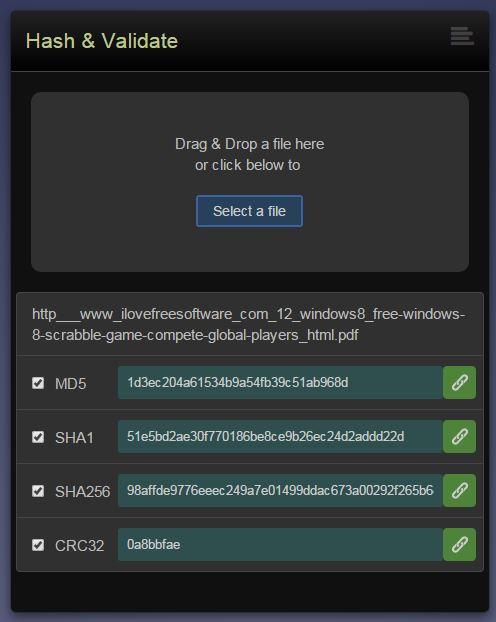 Just drag and drop or load up using the “Select a file” button the file whose hash signature you want to check. MD5, SHA-1, SHA-256 and CRC32 hashing signatures are supported. Hash values for smaller files are calculated quickly. For larger files it will take some time for them to be analyzed fully. Validation is also supported. Click on the green button next to the hash type you want to validate and you’ll be given link to the validation page.

Interface is very simplistic, with just a single input box, and a “Generate MD5 hash” button next to it. Type in the text string, hit the button and MD5 hash value is going to be displayed down below. It’s quick and simple, great for those who are looking for a simplistic MD5 hash calculator.

Also have a look at MD5 Hash Generator To Get MD5 Value of File, Compare with Another File.

First two extensions, Hasher and Toolsley Hash & Validate are my favorites from the list of hash calculator extensions above. I definitely recommend that if you download important files from shady sources, that you have Toolsley Hash & Validate installed to check the hash signatures of files before using them, to confirm that they were not altered and infected with viruses by third parties. Hasher is great for hash calculations of text strings. Let me know which extension you think is best by leaving a comment down below.