Here’s a list of 5 best OCR software for Windows 10 which you can use to convert text from images and scanned documents into text. Scanning documents doesn’t exactly leave you with a Word document that you can just continue to edit. Instead you’re left with an image file and everybody knows that you can’t just copy/paste text from images. That’s where OCR or optical character recognition software comes into play. Applications from the list down below will “read out” text from scanned images or PDF documents that consist of images and allow you to save the text into a editable format like RTF, DOCX, TXT, etc. 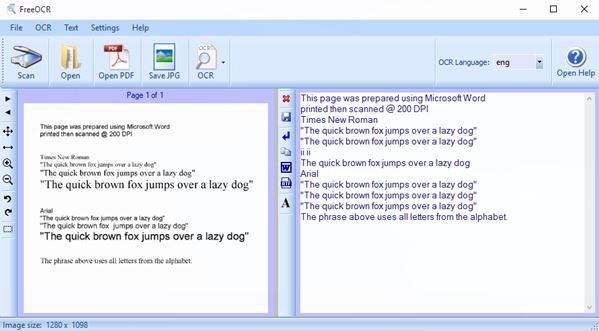 FreeOCR is an easy to use OCR software for Windows 10 where majority of popular image formats can be converted into text. BMP, JPEG, TIFF, PDF and all the other more commonly used formats when saving scanned documents are supported. Built-in scanner module allows you to also load scans directly from the scanner.

By default English, Danish, German, Finish, French, Italian, Dutch, Norwegian, Polish, Spanish and Swedish languages, or should I say their characters, can be detected. To open an image or a PDF document select “File >> Open” from the top left corner menu. Selected file is going to be displayed in the left-hand side pane. Make a selection of the area where text is located and then click on the OCR button to start the OCR scan. Processing will take a few moments and once its done editable text is going to show up on the right-hand side pane. From there it can be copied/exported directly into Word or Wordpad. 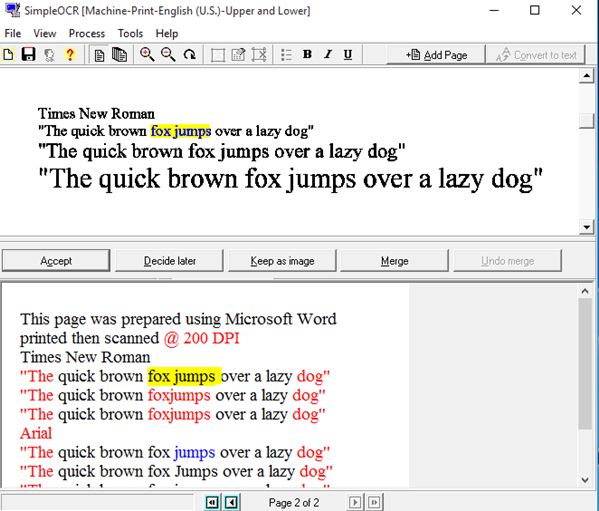 With SimpleOCR multiple images are loaded as document pages and then converted in batch. Once the OCR process completes, under each image you’ll find the processed text. Words in red require fixing, they did not pass the built-in spell checker. Once that everything is checked and correction were made to the converted text, select “File > Save” and save the text as either DOC or TXT. Free version of SimpleOCR can process printed text only. Paid covers both computer printed text and handwriting conversion. 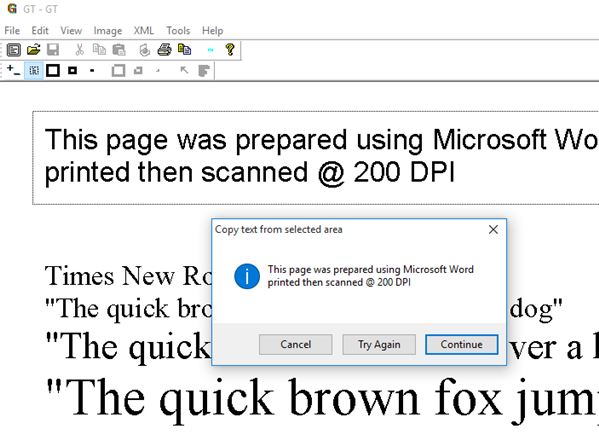 GT Text is a an OCR software that’s very similar in functionality to FreeOCR, but there are some advantage and disadvantages to using GT Text. Main disadvantage would be that PDF documents are not supported. Only images can be loaded into the application.

Advantages on the other hand are that in GT Text you get some basic image editing tools (black and white adjustments, pen tool, font outline correction, etc.) for changing the scanned image so that the OCR engine can detect characters more easily. There are two ways how you can start the OCR processing. Either the entire image at once (Tools >> Copy Text From >> Full Image) or only portions of image by making selections with the mouse. Detected text is given to you in a pop-up, see image above. 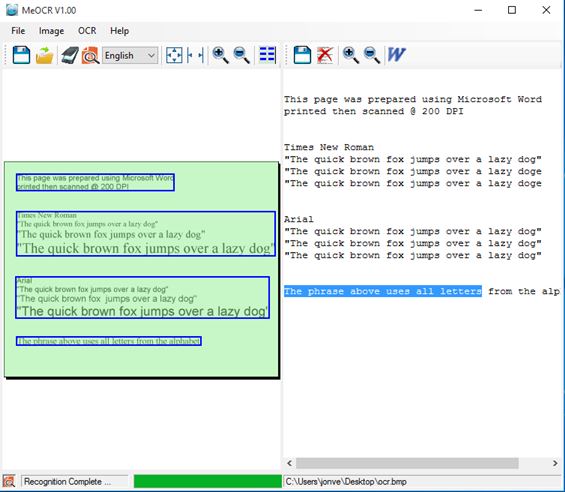 MeOCR Converter is an OCR software for Windows 10 where again only image formats are supported as input. BMP, GIF, JPG, JPE, TIF, TIFF and PNG pics are supported. Import directly from the scanner is also possible. Dual pane layout gives you view of the source file on the left and the converted text on the right, once that OCR does its thing.

Detection of text that was printed and then scanned is pretty good. Dozens of additional languages are supported next to English, just like in FreeOCR. Converted text can be copied from the text pane or directly loaded into Word, provided you have Word installed on the system.

Also, have a look at Online OCR, Supports 20 Languages to parse text from Images. 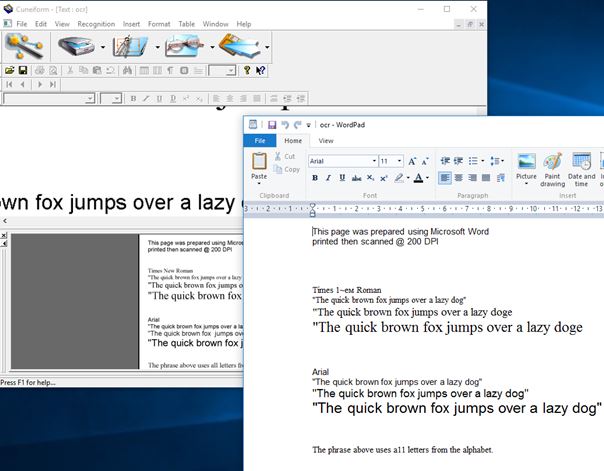 Cognitive OpenOCR is an OCR software with support for 23 languages, mainly Slavic languages, seeing how the application is developed by a Russian team. Only images, one at a time, can be converted into text. All the usual image formats are supported, and you can also load documents directly from the scanner.

Once that the image is loaded into the application you’ll be able to see it in the two preview windows down below. Clicking on the “OCR” button from the toolbar up top will process text from the entire page and automatically open it in Word (if you have it installed) or Wordpad (in RTF format) in case you don’t have Word installed. Some letters weren’t detected properly of off the test document I used, see image above, but it’s nothing that a little spell checking can’t fix.

All 5 of the OCR software from the list above worked great. The three that impressed me the most are FreeOCR, Cognitive OpenOCR and MeOCR Converter. First two, FreeOCR and Cognitive OpenOCR, cover large number of languages, and the are very precise. MeOCR is similar to FreeOCR, although it lacks PDF support. Let me know what you think, which OCR software do you use on your Windows 10 machine, by leaving a comment down below.