MP3 Sound & Voice Recorder ASR is a free Android app that allows you to record sounds on your Android device through your Android device’s microphone. The app is very lightweight, and runs smoothly and without any issues. Upon launching the app, you will be presented with an interface which shows you the space available on your device, and at the current recording settings, how many hours of audio you can actually record. The app is pretty well designed and also has a cleverly placed record button at the center of the screen.

MP3 Sound & Voice Recorder ASR is pretty easy and straightforward to be used on your Android device. As soon as you launch the app, you will be presented with an interface which looks like the below screenshot. 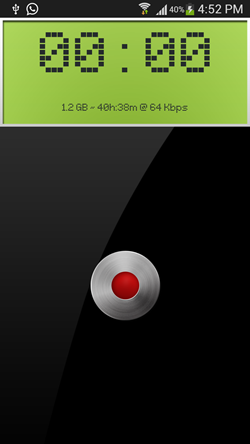 Here, you can see that the app has a neatly placed Record button at the center of the screen. At the top, it shows you the total time available for recording (this is calculated by the amount of free space available), and above this it also shows a timer wherein you can see the time for which the recording has been running. As in the above screenshot, the recording isn’t active, hence the timer is fixed at 00:00. 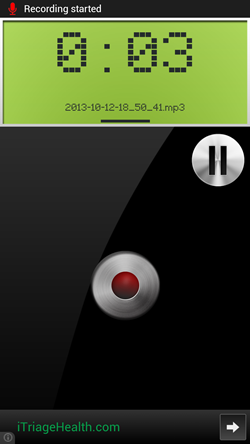 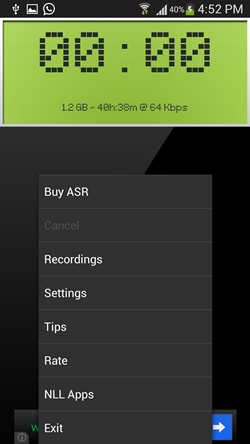 Clicking on Recordings will simply pull up your recordings, and clicking on a recording will play it back. You can long press a recording to show the options which allow for deleting it. 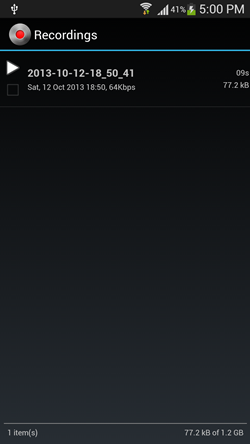 Through the menu from where we opened up Recordings, we can also change the various settings of the app through the Settings option. 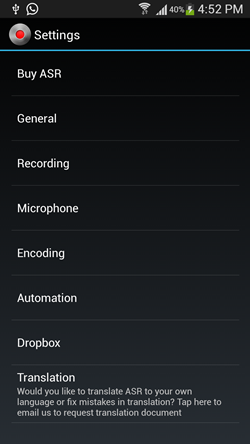 You can access the General Settings (portrait mode, theme settings etc.), Recording settings (various settings which allow you to change the folder in which recorded files are stored etc.), tweak the Microphone settings (enable or disable noise cancellation, etc), Encoding Settings (allows you to change the bitrate of recording, the default bitrate is 64Kbps, you can tweak it to 320 Kbps), Automation settings, link the app to your Dropbox account etc. Below screenshot shows a preview of what the Recording settings look like. 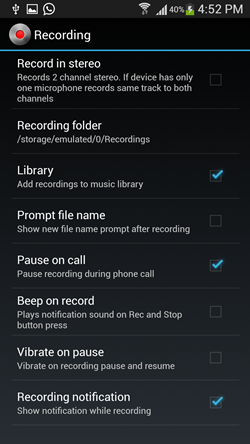 Similarly, you can tweak the other settings as well. Tweaking the settings is not difficult at all, trust me! For all that it matters, for your day to day usage, you don’t need to tweak anything at all. Simply press the record button, and you’re good to go!

You can also check out the Easy Sound Recorder app for Windows 8 which allows you to record audio.

MP3 Sound & Voice Recorder ASR is a great app to have on your Android device which has many tweak-able settings. Due to the versatility of the app, it can either be used for day to day recording, or can be used for professional recording purposes as well!