While playing Strike force heroes, I kept on saying “Wow, can online 2D games be this good?”. Every level had a new twist and variety elements in it. It’s a 3D game in 2D environment and if you don’t try this action game, then you will definitely feel bad. 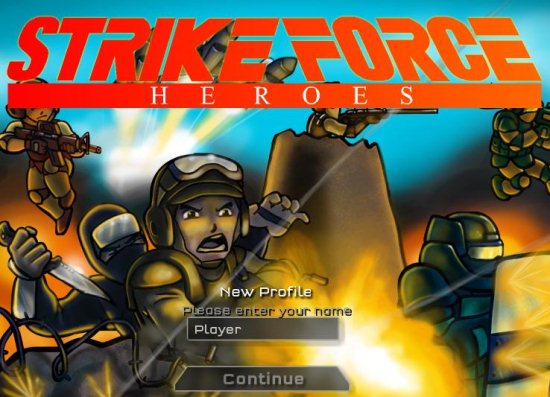 Strike Force heroes is a team deathmatch but with the bots that are artificial. Even your team mates are artificial and this game feels like Counter Strike and Major Mayhem mix up.

Just enter the website and the loading might take sometime. Then enter your name in the space provided like shown in above screenshot and press continue. Then you will go to the main page where you have several options like: play, soldiers, options, medals, and tips. In play option you can choose from: Campaign, challenges, and quick match. Prefer going to the soldiers option and have a look at it. Click on plus symbol for medic, cross hair symbol for assasin, bullets symbol for commando, and armor symbol for tank. Medic is for beginners, assasin is for little experienced guys, commando is for experienced guys, and tank is for hard core gamers. Each soldier has their own set of health, critical percentage, aim, and ammo combination. Even their primary and secondary weapons are different. You can upgrade them after completing stages and you get money according to your performance. So, with that money you can upgrade your soldiers and buy new weapons also. Now click on play option and choose campaign to get a little idea of the gameplay. 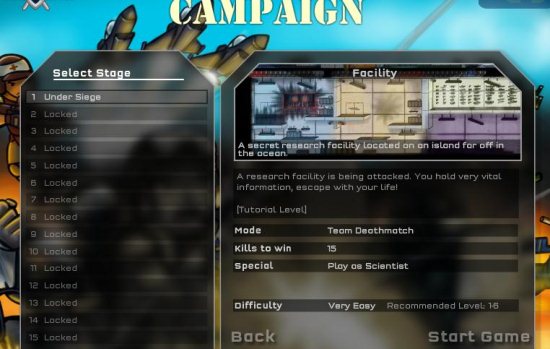 Here, you can see the stages, mode of game, kills to win, special (if any), and difficulty of that level. Click on start game to involve in some serious action. Use [WASD] to move your soldier up/jump, left, down/crouch, right. Use shift or [Q] to access or change guns, and use left click of the mouse to shoot. You will be guided in the beginning and later on you have to proceed yourself. After a certain number of kills the level will be complete and even if you die in middle you will be involving in the action from that point when you died. Don’t you worry because your team mates are there to help you out.

If you want to play challenges then it will be more difficult than campaign and quick matches involve various modes like deatmatch, team deathmatch, capture the flag, etc. Choose according to your wish and start playing. The game is played in various scenarios like in a basement, village, in air, etc. and I promise you will have sheer fun and excitement while playing this game. 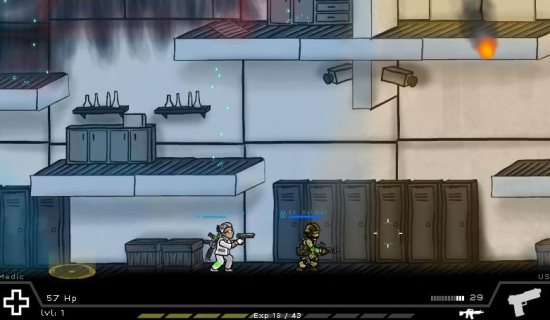 Strike Force Heroes is a action packed game, where you have to complete certain missions. It may be repetitive but will keep you entertained for hours. Another similar action game that you can try is Prism.