Dropbox is one of my favorite cloud backup service. Earlier it had doubled the referral space that it offered on free plans, so that you can get 18 GB Dropbox space for free. Now it has announced that it is doubling the space on paid plans, without charging anything extra.

Earlier Dropbox plans were Pro 50 and Pro 100, that offered you 50 GB and 100 GB space respectively. Now, Dropbox has upgraded that to Pro 100 and Pro 200 plans. These new plans give double the storage space, at the same price. 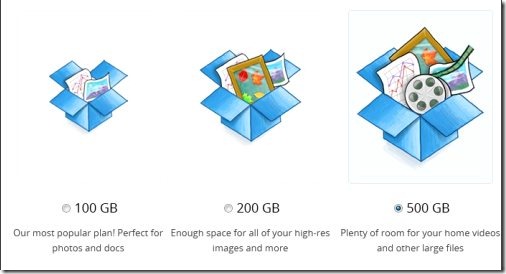 These new plans are valid for both existing users, as well as new users. If you are already signed up with one of the paid plans of Dropbox, you will see your Dropbox space double up soon.

Apart from this, Dropbox has also launched a Pro 500 plan that offers 500 GB space. This plan costs around $50 per month, or $499 for annual billing. You can see details on the pricing page.

This is quite a good move from Dropbox, especially in light from competition from newer services like Google Drive, and Amazon Cloud Drive.

So, if you have been sitting on fence deciding on whether to go with Dropbox paid plans or not, this would be a good time to make the switch.