The best part about Tweepi is that it is completely free. It is going to launch premium accounts also shortly, which promises to provide even additional features. Tweepi is completely online, and you do not need to download or install anything to use this free Twitter follower management tool. 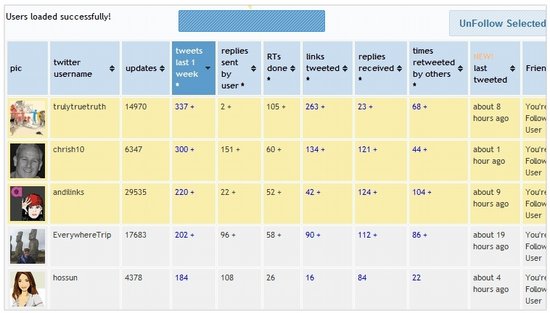 Tweepi is one of the best and easiest to use Twitter follower management tool. It uses OAuth authentication to login to your Twitter account. Once you login, it shows you information about your account in form of a nice dashboard. You can see all the Twitter users who are following you, along with some nice stats about them, like, when was their last tweet, how many tweets they sent in a week, how many links they tweeted etc.

All these stats are sortable, and you can sort on any field to see corresponding Twitter users. For example, if you do not like people who tweet a lot, you can sort by number of tweets, then select checkbox against them, and choose to Unfollow them.

Here are some of the Twitter Follower Management features of Tweepi:

Mass Unfollow: Tweepi lets you mass unfollow Twitter followers. By just one click, you can unfollow all those Twitter users whom you are following, but they are not following you back. Also check out other mass unfollow tools.

Tweepi also provides interesting way to find Twitter users that match your taste, and mass follow them. It provides four different ways to do that:

Tweepi is quite a fantastic tool to manage your Twitter account. It is always a good idea to keep using such tool after every few weeks, so that your Twitter list remains clean. Only thing I am afraid about such free Twitter tools is that how long will it survive. I have seen lot of amazing Twitter tools shutting down simply because they did not have a monetization model (like, Tweepler, FakeFollowers, Buzzom, and Tweepular). In case of Tweepi, I see that they are trying to get ads from BuySellAds, and also planning to sell Premium accounts. I hope they are successful in both, so that this amazing tool stays afloat.