Just want to transfer your PC files to your Android device wirelessly, minus the Sync? No big deal! You can take a look at this Article instead. 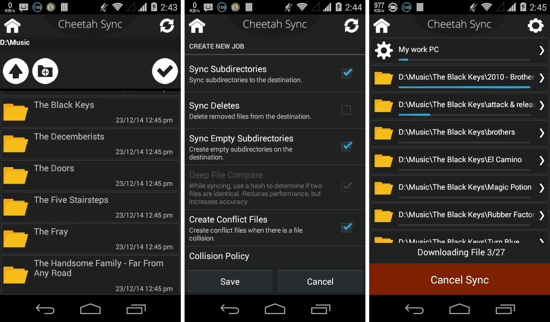 Folder Sync (formerly known as Cheetah Sync) is probably the best Sync App for Android. You can use Folder Sync to Sync any kind of File(s) between your Android device and your PC. The app requires you to install a desktop client on your PC before it can connect and sync the two. You can select any folders on your Android and PC as default, and these folders will remain in Sync from then onwards. I, for one, use it primarily to wirelessly sync Music to Android devices, as any changes in the Music folders is handled via a 2-way sync. You should head over to this article to know more about Folder Sync. 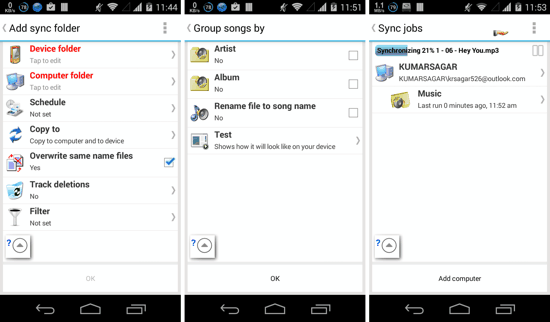 SyncMe is another great app to Sync Music to Android devices. In fact, much like Folder Sync, you can sync almost any type of file using SyncMe for Android. All you need to do, is set up the Folders on your PC for Network Sharing, once. Then, you just have to set up SyncMe by adding your PC from your local WiFi network, and then selecting the folders you would like to sync, from your Android device and desktop PC. You can also choose to group the synced Music files by the Artist or Album names. As soon as you will open the app, you will be shown a small description-cum-tutorial pop-up to clear things out. SyncMe also has a great feature which allows you to set the Schedule and specific WiFi Networks, so that the Sync can automatically occur when connected to them. The app is available for free on the Play Store. Go on, grab it! 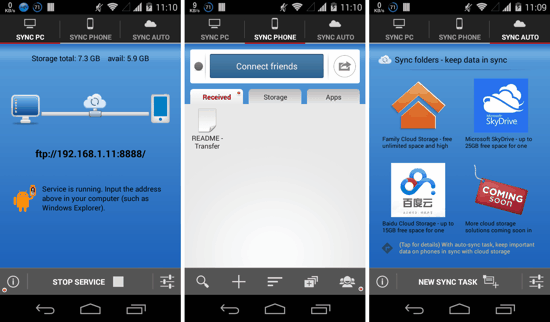 Software Data Cable is another app designed to simplify your life. This app allows you to connect your Android device and your PC using the Local WiFi Network your devices are connected to. Essentially, using this app, you can access all your apps from your Android device right on your PC, without the need for a USB data cable. When you open the app, you will be shown an FTP server address, which you have to enter in the File Explorer on your PC. You will then be able to see all the Folders and Files of your Android device, right on your PC. Copying and Pasting files is equally easy, and can be done even with a drag and drop. You can also connect to other peer Android devices using the Connect Friends option in the 2nd tab. You can get Software Data Cable from the Play Store for Free.