Bloodline Champions is a free MMO game available for PC download. Engage in short intense tactical battles in an arena, with other players online.

Bloodline Champions is a free top down MMO (Massively Multiplayer Online) game; in which you play against online players by forming teams with other online players. All the characters in this game are fantasy characters and the game is all about timing, aiming, and speed. The download size of this game is 350 MB. 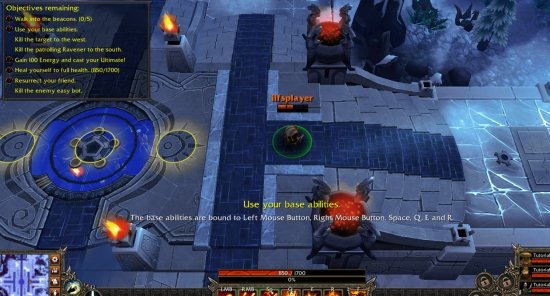 This free MMO game, Bloodline Champions is created by both: Stunlock Studios and Funcom. You can download this game on your PC directly or through Steam also. As soon as you enter the website, you just have to create a username and password and register with your email id. Then you will be given the download link for PC or else download directly from Steam. Then after installing the game size expands up to 1GB. Then just launch the game and log in with your username and password to start playing Bloodline Champions.

Let me warn you in the beginning itself, that the game is tough and doesn’t depend on luck. It depends on timing, aiming, and speed. In an arena, you have to fight your enemies using your special spells and protect yourself from their spells. The whole game seems to be kind of magical or fantasy kind of game. You have to play as a team, coordinate with others, and gain rewards. The game is confusing too, so better go through the tutorial that is designed for every aspect like: basic combat, basic healing, igniter training, spear master training, and much more. Go through few of the training sessions and you will get to know the game well enough.

You can choose from more than 25 different characters and they are classified into: ranged, melee, healers, and tank. Each kind of characters have separate abilities and powers. Once you enter the battle, you will gradually gain experience, have to collect blood coins which fall when you kill your enemy, and rewards which upgrade your character. The bloodline characters will be unlocked after certain period of your game play. The game is completely free but if you are in a hurry to try the higher bloodline characters, then you have the option to buy them.

Gameplay of this Free MMO Game:

Bloodline Champions can be confusing at times, but once you go through the tutorial you will know what’s happening in the arena. As soon as you log in, you will be shown a screen in which you can choose from: bloodline, play, and marketplace. In bloodline you can view: profile, traits and medallions, profile search, knowledge base, rankings, and tournaments. In marketplace, you can buy outfits, special offers, boosts, etc. Once you are done with other options, you can choose play and then you will be shown four sections: tutorial, single, arena, and scenarios.

In this game you can invite your friends to participate in the servers or create your own LAN game to play with others. Get more info on Gameplay of Bloodline here.

Bloodline Champions is good graphical free MMO game to play and enjoy. The sound effects are also aptly created for the game. You can also try other games like: APB reloaded or 5 free FPS games.