Here’s a list of 3 poll creator apps for Android which you can use to create polls on your Android powered phones and tablets. A poll is a great way to find out what the world thinks about a certain topic. This can be anything from silly personal questions like, what’s your favorite color, to something more serious. Businesses can for example ask their customers what their opinion is on the quality of the service that they provide or do market research.

Show of Hands is a great poll creator app for Android, and not just for Android. This was originally an iPhone app that was only recently ported to Android. 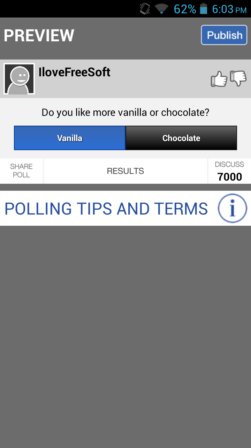 App works in sync with the website that bears the same name. You will have to create a profile to use the app. Registration is simple, you’ll just have to type in your name and a password. Poll consists of a single question with 2 options. Created polls are published on the website and can be shared with people via social networks. Voting is anonymous.

Get Show of Hands.

Lets Poll – Survey Quest Maker works the same way that Show of Hands does, polls that you create are posted online on the Lets Poll website. 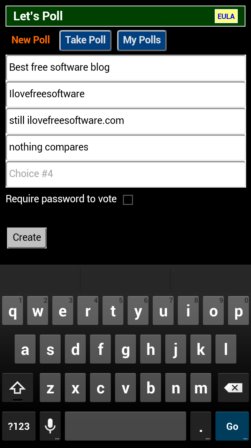 Difference between the two is that Lets Poll doesn’t require registration, more answers to the poll question can be setup. Polls can be answered online, or on smartphones and tablets. Each poll that you create gets its own ID that you need to remember, so that the poll can be found later on. Created polls can be found online using the generated ID that the apps gives you after creating a poll.

polltogo – Mobile poll maker is another website powered poll creator app for Android that has even more advanced features than Lets Poll. 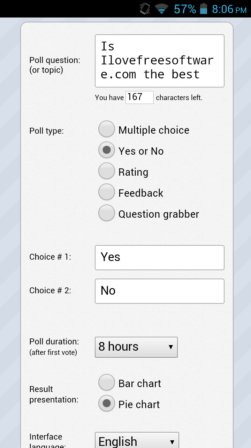 Up until now I mentioned a two choice poll, a multi-choice poll (as in more than two choices) and now we’ve come to a poll where there’re a multiple choices, Yes or No choices, ratings, feedbacks and question polls. They can have a time limit or they can be online for indefinitely. Lots of other interesting features are also available, out of which I’d like to single out vote notifications, which allows you to receive notifications when someone casts a vote in the poll that you’ve created. Created poll will be live on the website and can be accessed from anywhere.

Show of Hands is gonna be more than enough if you’re only looking to create a simple two-choice poll, without a lot of advanced options. For something more advanced I suggest you give polltogo a try, for all the previously mentioned reasons. For something in between, there’s Lets Poll. Which apps you’re gonna choose depends entirely up to you. Let me know what you think in comments down below.