WindowsPod is a very simple and lightweight music player whose most notable feature would be that its interface looks like an iPod, but iPod-like interface isn’t the only interesting thing about WindowsPod. Very low resource usage that this free music player has would probably be far more important to all those who have older hardware where every bit of computer resources is important. 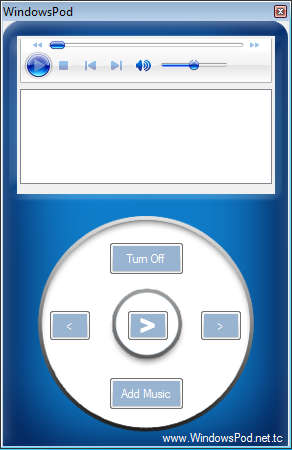 As you can see from the image above, WindowsPod really does look like an iPod. The large round button at the bottom plays the same role in WindowsPod as it does on an actual iPod, for accessing menus and controlling songs which are currently playing. Display at the top contains more advanced player controls and down below at the bottom is where you’ll be able to see the playlist of songs that you import to using the Add Music button. Main features of WindowsPod are:

Unlike other more advanced music players which come with a lot more extra features, music libraries, album art, lyrics fetching, WindowPod focuses more on simplicity and ease of use, which is something that a lot of music lovers out there prefer more over everything that we mentioned a few lines back, myself included.

Something that WindowsPod does share with other music players would be that the songs which you want to listen have to be imported. To do this you’re going to have to click on the Add Music button. 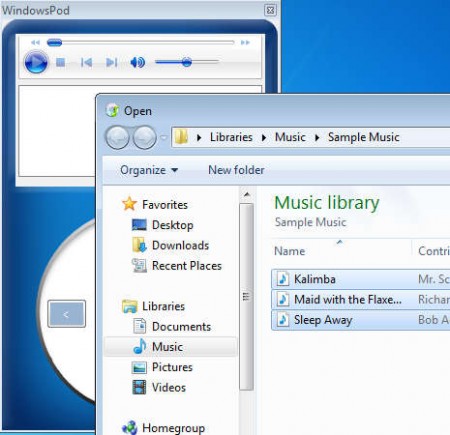 You cannot select and import entire folders at once, which is a drawback, but if you want to open up more songs at once, you can select them by clicking on the first one in the list, holding down the Shift key and then clicking on the last, the usual. Click OK and the songs should become available in the main playlist. 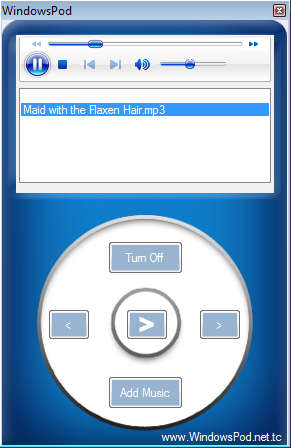 Another bug that we came across, perhaps it’s just us, but song names cannot be see on the main playlist, not until you click on it. WindowsPod is still early in development and future versions should probably take care of these types of quirks. Songs played just fine, even though they were not visible, simply click on the seemingly empty area and they should start playing.

Despite of the fact that there are still some kinks to sort out, WindowsPod is a very interesting music player which you can use at parties, for example, where if you don’t have an actual iPod which you can hold in your hands, you can play music with a virtual iPod on your Windows system and have an interesting topic to talk about. Single click song switching is very useful, and you can use it to switch between songs faster, thus saving you some time.