Free Media Player is a simple to use video player that can play video files of almost any popular format and you can create playlists of videos too. Whether it is a flash video format, MPEG format, real media format, or any other format, you can play all of the supported videos with Free Media Player. You will be able to play mpg, m2v, mp2v, dat, rt, rm, rmm, ram, d2v, swf, divx, rmvb, ,mp4v, mkv, webm, vob, wmv, ratdvd, smk, flic, fli, dsm, ivf, d2v, 3gp, 3gpp, 3gp2, and much more video forms. Thus with most of the popular formats, it is helpful to play some uncommon format videos also.

It’s an easy to use video player but you won’t find a lot of options on its interface. Only basic playback controls and option to create playlists are present. You can create and save multiple playlists in *.m3u form and can play video files with ease. But one of the major shortcoming of this media player is that it doesn’t play audio or music files as it is possible with most of the other free media players. Also you can’t drop videos directly on its interface as drag n drop support is not available here. 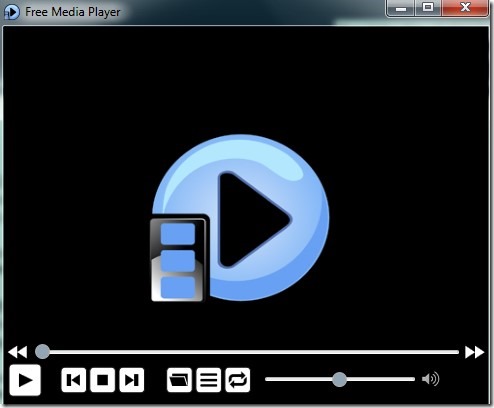 Interface of Free Media Player is visible in above screenshot where you can see playback controls and a volume slider to adjust playing video volume.

In between playback controls and volume slider, there is a button present  ‘Open playlist’ (as highlighted in below screenshot) which is used to open playlist window. On that playlist window, you can add multiple video files, can arrange positions of added videos, and can save them as a playlist file to desired location on your PC. Add as much videos as you want and save them. And if any video is added to your playlist by mistake, then you can remove it using ‘– button’. 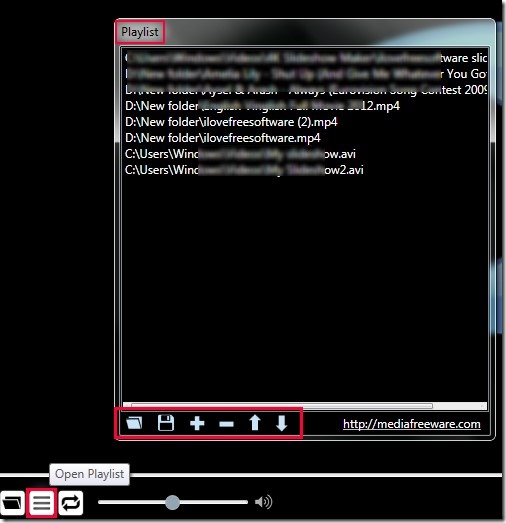 After this, you can load created playlist anytime to Free Media Player and can play videos. Here one thing can disappoint you is that you cannot view your playlist directly on main interface of this player. So everytime you have to open Playlist window to play next playlist and view added videos.

Some Features of Free Media Player To Play Video Files Are As Follows: