It is a simple media player with beautiful interface that provides basic playback controls. But with it’s good features, it has few shortcomings as well. One of the major shortcomings are that you can add only a single audio or video file to play and there is no option present to create your own playlist(s); as it is possible with most of the other free media players. So Final Media Player is more useful if you want to play a movie. Other than this, drag n drop facility is not available that lets you directly drop a media file on its interface to play. 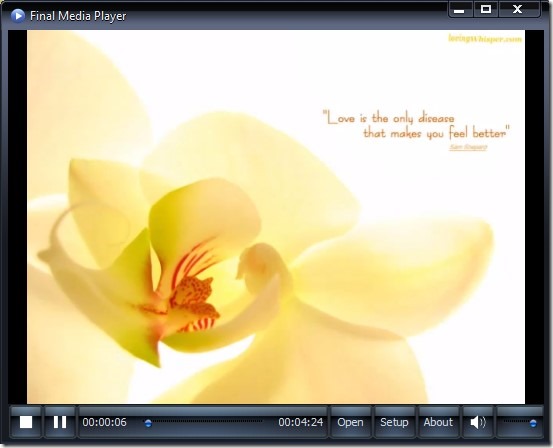 Above screenshot shows beautiful interface of Final Media Player where you can play a single media file at a time. At the bottom part of its interface, there are playback controls (to play/pause, stop audio or video) present and a slider is available to forward/back playing media file. Other than this, as drag n drop is not possible here, so you have to use Open button to select a media file from your PC to play with it.

Just next to Open button, you can see Setup button using which you can associate multiple formats to play with Final Media Player. As visible in below screenshot, select required formats and then you will be able to play associated media files directly with this player by double-clicking on that file. 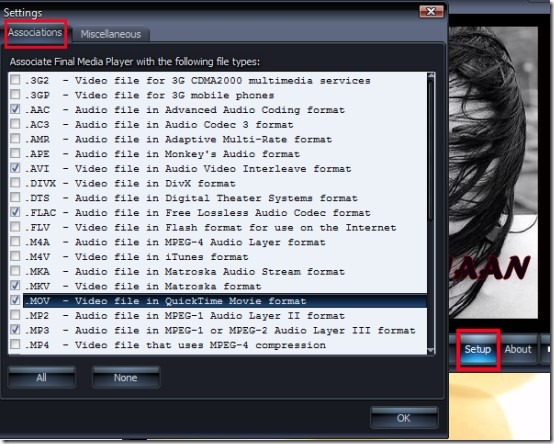 Some Features Of Final Media Player Are As Follows:

How To Download and Install Final Media Player To Play Media Files?

You can download it with the link present below in this article and can install it with the help of an installer known as ‘InstallIQ’. Installation is ad-supported so you have to be a bit careful during installation process. It will provide you multiple extra products (such as Smart PC Cleaner, Fast Search, Driver Genius etc.) to install along with this Final Media Player. You can cancel other products installation by clicking on Decline button (as highlighted in below screenshot). 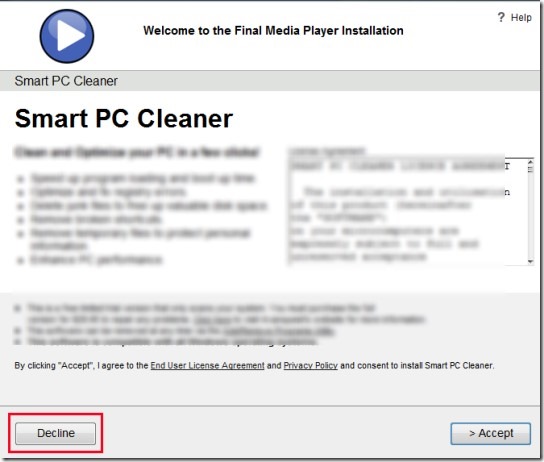 After this, you can continue the installation process of Final Media Player and can use it to play media files.

Final Media Player is a nice addition in the list of media players but needs a lot of improvements. Such as an option to create playlists, addition of multiple media files at once, plugins support, drag n drop feature etc. For more feature rich media players, you can use Wondershare Player, Circular Media Player, 1mediaplayer, and Yookoo.

And to get Final Media Player for free, click here!