You can use this virtual machine creator in order to quickly and easily create virtual machines for bootable ISO images, floppy images, physical CDs/DVDs or actual hard drives where operating systems are installed.

Main purpose of Simple Boot is for quickly testing images and discs with operating systems like Windows, Linux, and other various different system utilities like MemTest. 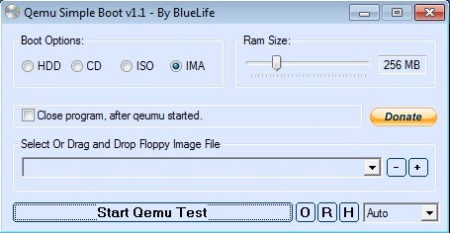 Unlike complicated setups that more advanced tools like VirtualBox or VMWare have, the only settings, the only menu that you need to use in order to create a virtual machine is the one that you can see on the screenshot above.

Boot Options in the top left corner are for selecting the type of media from where system is gonna be loaded. RAM Size determines the amount of random access memory that the booted system will use and all the way at the bottom image selection and virtualization controls are available.

Hard disk booting here implies that you have several operating systems installed on your computer, several Windows installations meaning dual boot and that you would like to boot the operating system from the other partitions of your hard drives. It’s not recommended to boot running Windows installations, the ones where Quemu Simple Boot is active because it might corrupt the system. You’ll be warned about this before trying to do it. 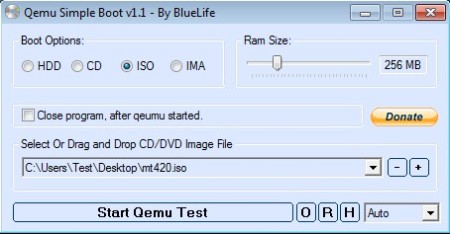 Drag and drop the ISO image that you’d like to boot to the load image field down below or use the plus sign next to the file selection box to open up the Open file dialog and select the ISO image manually. This can be anything, operating system like Windows for example, if you would like to test out if an image is working properly. Set the RAM size that the virtualized hardware will have and when you’re done with setup click Start Qemu Test. 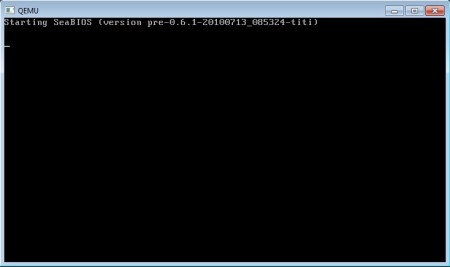 Another window will pop-up where the actual virtual machine and the image that you’ve selected will boot. How long it takes depends on your hardware.

Quemu Simple Boot makes it very easy to test and boot a large selection of bootable media. It’s perfect for anyone who’s interested in testing out operating systems without having to deal with the more advanced hardware virtualization software that we mentioned in the introduction.