I am very excited to talk about Candy Crush Soda Saga for Windows 10.

Candy Crush Soda Saga is a well designed game by the developer King which has been released on multiple platforms like iOS and Android. It has now recently been launched on Windows 10 devices as well. Today in this article, we will read about the Windows 10 version of Candy Crush Soda Saga. The game is the same as the counterparts on Android and iOS, and does a great job of performing the task of optimizing the animations of the game to work smoothly on even low end devices. Candy Crush Soda Saga for Windows 10 will work on almost any Windows 10 machine out there, and if you have a touch enabled device, the game is even more fun to play as you can simply drag and move the candies and soda bottles around to create pairs. The game has over 700 levels of constantly progressing difficulty and makes for a fun pastime app if you are a fan of puzzle games!

Candy Crush Soda Saga for Windows 10 is available for free from the Windows App Store.

Candy Crush Soda Saga for Windows 10 is a puzzle game in which you have to create pairs of three or more similar candies/soda bottles. In the game, you have to increase the soda level in the gameplay zone by appropriately pairing up the candies and soda bottles as per the requirements of the level. The target for each level is displayed before the commencement of the level itself. The aim is to reach the target with as many number of moves remaining on the counter as is possible to create the highest possible score!

Windows 10 version of Candy Crush Soda Saga is designed in to have the best possible graphics without compromising on game performance. The game supports a wide array of CPU architectures including x86, x64 and ARM architectures. The game weighs in at a compact size of 69Mb.

Running Candy Crush Soda Saga on Windows 10 will bring up the main screen. Here, you are asked to accept the Terms and Conditions of the game. Don’t bother going through them, just click on Accept after you have checked the I agree with the terms, as set out above option. 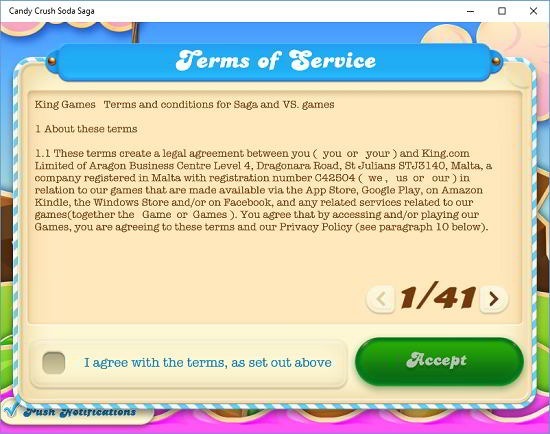 Once accepted, the main menu loads up. Here you will be asked to directly start up the game itself, or you can go ahead and choose to login with Facebook. Connecting your Facebook account to the game is always helpful as you get to ask your friends to provide you with free lives which will help you carry forward in the game. The main menu can be seen in the screenshot attached below. 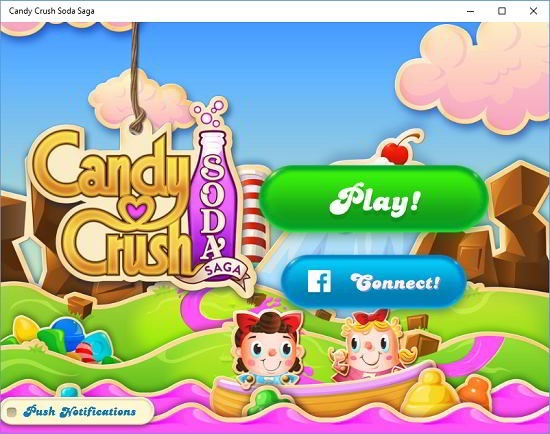 You may also choose to opt for Push Notifications in the screen shown above. When you have checked that particular option, you will be shown when your lives are ready, etc., information pertaining to the game as small toast notifications on your device even if the game is closed. Connecting your Facebook id is simple. Just click on the Connect button and enter your credentials in the next screen which loads up (shown below). 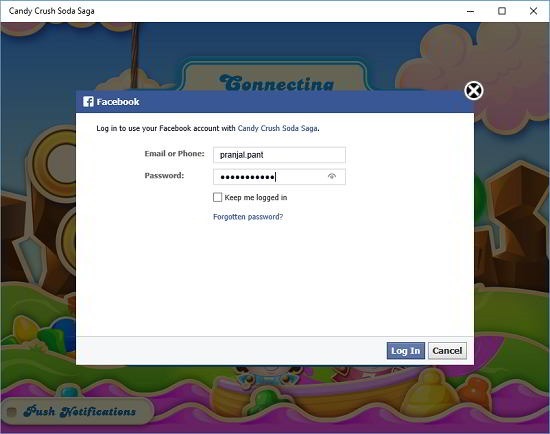 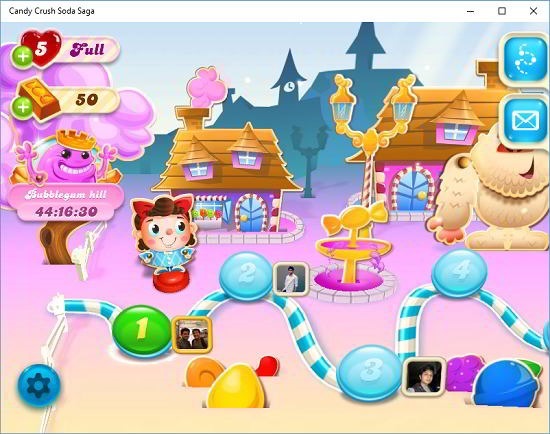 Click on the any of the available levels to start gameplay. Levels which haven’t been completed yet are greyed out. When you click on a particular level pointer, you will be shown the objectives that need to be met in order for completion of the level. As I chose to play the first level, you can see a brief tutorial which followed in the screenshot attached below. 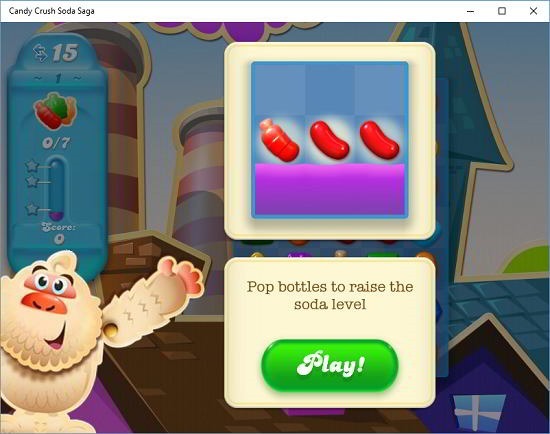 Click Play button in the prompt above to be taken right into the gameplay zone itself. You can see the various candies arranged in a grid format in the screenshot below. 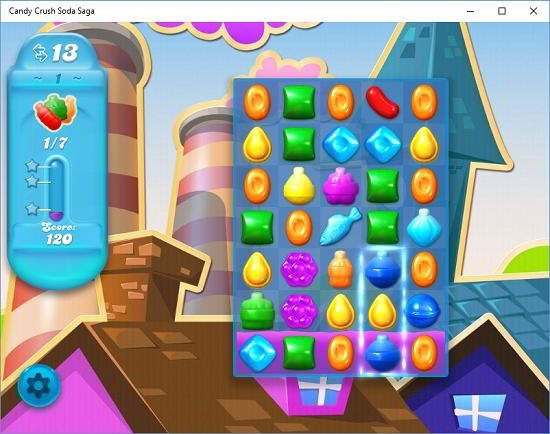 The available number of moves are shown in the top left screen corner, and right below that is the star meter which shows you what rating you will get upon completion of the level. The star meter rises as you score more. At the bottom left of the screen is a settings gear icon which allows you to tweak the various settings like music settings, etc. In the gameplay screen, the objective is to arrange three or more similar candies in a way which lines them up either horizontally or vertically. There are also soda bottles which can be popped out by grouping them with two or more candies of the same color. At the end of a level, your target must be achieved. Upon successful completion of a level, you are shown your level rating like the one shown in the screenshot below. 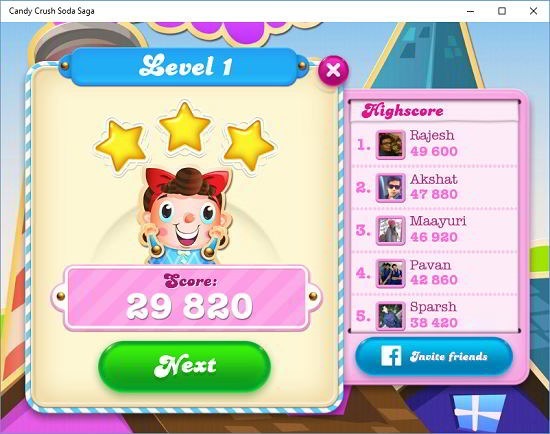 Jumping into the next level is straightforward. Simply click on the Next button at the bottom of the above shown screen and you will be taken back to the level selection screen where you can easily choose the next level of the game. In the screenshot shown above, you can also keep tabs on your friends’ scores if you have connected the game with your Facebook account. This pretty much wraps up the main features of Candy Crush Soda Saga puzzle game app for Windows 10 devices.

Other similar games which you might want to try

Candy Crush Soda Saga for Windows 10 is a well designed match 3 puzzle game app for Windows 10 devices which does not compromise on graphics, and plays smoothly on all machines running Windows 10. The game has everything going for it – the compact size, the wide array of levels, great graphics , the gradually increasing difficulty with each passing level and what not! Overall the game is well polished and is worth a download for anyone who is fan of complex puzzle games.